On the other hand, if your dialogue is as thin as a rice cracker and just as stiff, you can send your reader swimming out to sea. 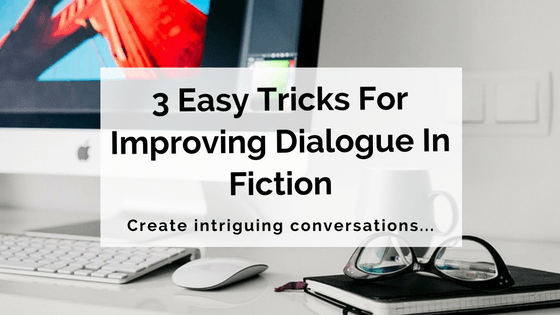 Strong, authentic dialogue is invaluable and is a vital tool in powerful storytelling. When employed with purpose and skill, dialogue can:

The potential of well-written dialogue is limitless and there are a variety of ways you can take yours to the next level. The easiest way to improve your dialogue is by simply observing and analysing those around you. 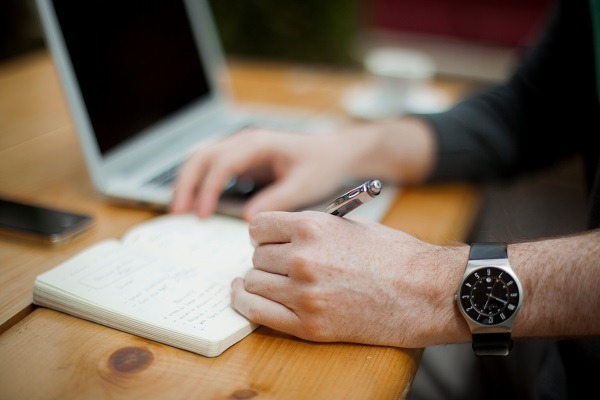 Watch how conversations unfold in the real world and take note of inflections, body language and underlying, unspoken currents. Transferring these elements into your own work will add complexity and realism.

That being said, if you’ve already exhausted real-world examples, or if stalking family members and/or the general public isn’t your thing, then do yourself and your narrative a favour and read on. We’ve got three creative tricks that will take your dialogue to the next level.

1. Introduce silence to your characters’ conversations

Silence is as it sounds: silent. Silence is the pause in conversations, the discernible heaviness between sentences. A silence is an insinuation, an inference, an assumption without blatant confirmation.

Silence can transform a humdrum back-and-forth into gut-tightening tension or heart-hurting dread. Silence is one of the greatest tools a writer can employ, and one of the simplest.

To insert silence into your dialogue, omit an answer. Instead of the usual prompt response between speakers, silence a character completely.

By silencing one of your characters, you instantly add weight to the remaining speaker’s words while simultaneously creating questions, emotive context, complexity and unspoken conflict. 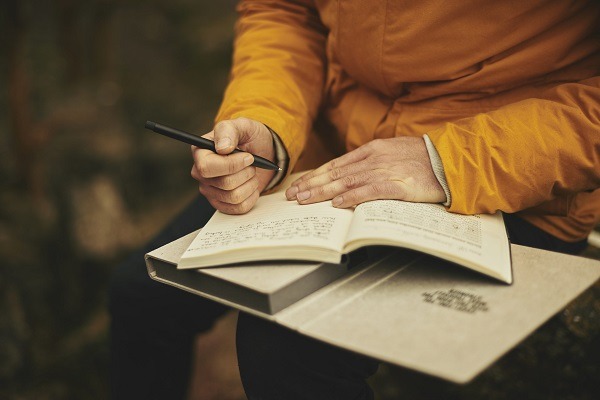 You’ll also find that in order to respond realistically to the silence, your remaining speaker’s reactions and dialogue will intensify, amplifying the entire scene.

These immediate results are why it’s vital to use silence appropriately. By appropriately, we mean wherever it will add the narrative, not detract from it. Use too much silence and the impact will lessen. Misplace silence and your reader will be wondering why a character had such a dramatic response to ‘would you like sauce on the side or on top?’.

Silence is a powerful tool. And with great power comes great responsibility.

To give you an idea of the difference silence can make, here’s a short example. This script has no silence:

“Hey, did you send through the payment yet?” he asked.

“Payment? What payment?” she said.

“The bill for the cleaners.”

“The cleaners?” she echoed.

“Yeah, we have to pay them before the 5th or they’ll ruin our online rating,” he said.

“You forgot? Damn it, I knew you’d stuff this up!”

And here’s the same script with silence added.

“Hey, did you send through the payment yet?” he asked.

“The bill…for the cleaners,” he prompted. “Did you pay them?”

A flush unfurled in her cheeks.

“Damn it, you had a whole week to  sort that out. I can’t believe you! We had to pay them by the 5th. Now they’re going to ruin our online rating.”

As you can see, the girl’s silence makes an enormous difference to the impression of her guilt and the nature of the characters’ relationship.

She makes no admission aloud but her silence makes it clear she’s in the wrong. It also implies the unbalanced power structure between the two. The anger of the male speaker is also amplified, almost overcompensating for her silence without appearing melodramatic.

Silence is not restricted to a singular emotion. You can apply this technique to a range of situations from joy to fear to utter befuddlement. 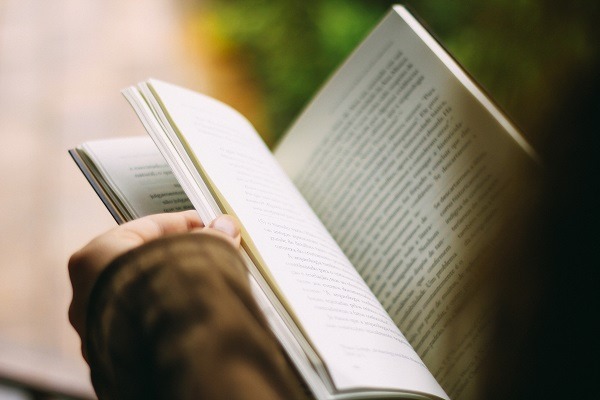 At the same time, silence doesn’t have to be a marathon. A character doesn’t have to be mute for an entire conversation; use silence as sparingly or as freely as you believe suits your scene, always with the character’s traits and the bigger picture in mind.

Remember, one omitted response can carry more oomph than a dozen cold shoulders.

2. Have your characters use avoidance techniques

Avoidance is just as it sounds: characters avoiding addressing a certain topic or answering certain questions.

To insert avoidance into your narrative, have your character avoid an answer in a way that reflects their personality and the tone of the conversation. By this, we mean keep it realistic. An English housemaid from 1879 might avoid a question from an employer in a completely different manner to a 1994 Nirvana fan at a concert.

For example, here is the earlier conversation modified to include avoidance.

“Hey, did you send through that payment?”

“Did you pay the cleaners or not?”

“Damn it, answer the question.”

“I knew you’d stuff this up. Now they’ll damage our rating online. I can’t believe you!”

See how easily avoidance fits into this scene? Avoidance is a natural part of conversation, especially where emotions such as guilt, grief, secrecy or ignorance are present.

Avoidance is also a great way to insert a snippet of backstory into a conversation. (‘Snippet’ is a literal term here – excessive information dumping into dialogue is an excellent way to ruin it.)

A character might avoid a topic or an answer because it draws on painful memories, or reminds them of something or someone from their past. A momentary flashback coupled with avoidance is a fantastic tool to give your reader a greater insight into your character.

As with silence, avoidance doesn’t have to be a long-term affair. It can end abruptly in the next sentence or can go on indefinitely. This is up to you and how you choose to dispense it.

Just keep in mind that intentionally keeping information from readers (for example, an answer to an important question asked early on in the plot) for too long for no other purpose than having a ‘twist’ at the end can often lead to frustration and disengagement.

Action may seem out of place in dialogue, but in fact, it’s right at home. Better than home, actually.

Through thoughtful physical choreography, you can add layers of emotional and mental context to a seemingly simple discussion. Action removes the need for ‘telling’ the reader how a character feels. Action can support or, more interestingly, contradict words spoken aloud.

Action can follow on directly after speech (i.e. ‘he said, crossing his arms’), but works just as well, if not better, as a standalone, understated element.

But users beware: action in dialogue needs a light hand. It’s easy to go too far. If you overwrite action your scene will be transformed into a melodramatic catastrophe full of violent blinking, throat-ripping gasps, jerking bodies and chewed-through bottom lips.

Actions should match a character. Not everyone gasps when surprised, at least not audibly. Not everyone fidgets with their hair or clothing while they speak. Every personality takes on new situations differently.

Think carefully about your characters and what’s on their mind when they’re speaking. For instance, is your character telling a lie? Do they do this often? If not, why are they lying now? Are they nervous or calm with purpose? Are they convincing or are nerves turning their pits into puddles?

Consider the range of body language and physical symptoms of contradiction and conflict available to you when writing your action into your dialogue. Try to avoid the obvious and overdone. The more unique the action is to your character (i.e. a particular nervous tic when they lie), the better.

Don’t feel the need to oversell the subtle. Sometimes a lack of action is more powerful than an explosion of movement.

Humanity has evolved with body language as a central component to our social evolution. Even if we’re not conscious of it, we’re picking up other people’s signals all the time. The reader will too; trust them to understand, or at least to get a ‘feeling’ of what’s going on.

Here’s the earlier script with action added alongside silence and avoidance.

“Hey,” he said, leaning across the table. “Did you send through that payment?”

She didn’t look up from her phone.

“Hello? Are you listening to me?”

He snapped his fingers in front of her screen.

“Did you pay them?” he asked again.

She picked at the edge of her phone cover. “Did you see that email from Sarah about that storm front coming in this weekend–”

“Did you pay the cleaners or not?”

“Damn it, answer the question.”

She shrunk back into her chair.

“Ah, I knew you’d stuff this up. Now they’ll damage our rating online. I can’t believe you!”

A few lines of action among words and suddenly something real is happening here. The reader becomes more invested; the tension between the characters and the condition of their relationship is emphasised without overt explanations.

Mindful use of action has made this scene stronger and can do the same with yours.

Dialogue plays an enormous role in almost all narratives, whether the author realises it or not. The effect can be positive, plot-moving, character-defining and tension-raising, or the opposite: dull chit-chat that sends a reader into slumber.

Silence, avoidance and action (or lack thereof) are three simple yet powerful tools that are great to use separately and even better when combined (depending on the emotion you are trying to convey).

Each one can complimenting the other to create a complex, layered conversation that captures readers and achieves more than just a dissection of the weather.

By implementing one or all three of these tools, you can make sure your own narrative has a backbone to be proud of: potent and engaging dialogue.

Maggie Doonan is an emerging author of fiction and non-fiction. She has a Bachelor of Fine Arts: Creative and Professional Writing (with distinction) and several publications online and in print. For more on Maggie, check out her Facebook page here.