So you want to write a fantasy novel. You’re enamoured with epic sagas from the likes of Tolkien, Martin and Rowling; you love everything about the genre, and you feel that you have your own fantasy story to tell.

But this is a complicated genre to write in. While there aren’t hard-and-fast rules to follow, there are certain elements that must be included for a story to be classified as ‘fantasy’. However original your story may be, it does need to fit somewhere within the genre if you’re going to attract an audience.

Don’t have time to read the whole guide right now?

Fantasy readers expect certain things from the books they consume. And no, we’re not talking about common tropes like elves, dwarves, trolls and dragons! We’re referring to much broader elements – general concepts within which you can be as inventive and imaginative as you like.

So without further ado, let’s take a look at the five essential elements every fantasy novel needs. 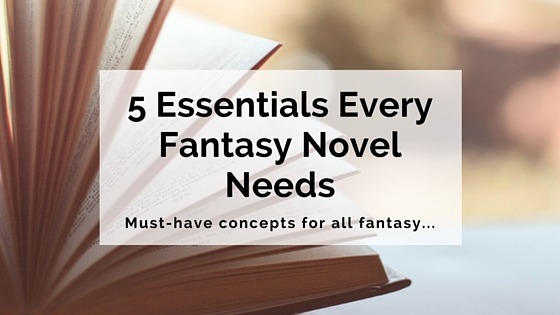 This is the element that sets fantasy fiction apart from other genres. For a story to be considered ‘fantasy’, it needs to contain some sort of magic system. But what exactly do we mean by this?

In short, a magic system refers to things that occur or exist in your story that do not or cannot exist in the real world. Elements of sorcery, witchcraft and enchantment; fantastical creatures and the supernatural; advanced abilities or powers… Basically, anything with no basis in real-world evidence or logic can be considered ‘magic’.

This is where you can really set your story apart from others in the genre. If your magic system is completely unique and imaginative, if it’s something readers haven’t seen before, your novel has a point of difference.

An innovative, intriguing magic system is often the key to helping your novel stand out in the saturated fantasy market.

Your magic system should play a key part in your story. Whether it’s a source of conflict (see more on this below), a driving plot force, or a means for character development, magic is of vital importance in every fantasy novel. But it can’t be treated merely as a convenient plot device; your magic system needs to have established rules, and it needs to follow them.

To get an idea of what constitutes a well-developed magic system, take a look at the works of some established fantasy authors.

George R. R. Martin’s A Song of Ice and Fire series contains some standard magical elements such as dragons, prophecies and the resurrected dead, but the complex way he weaves these elements together makes for compelling and original fantasy.

Patrick Rothfuss’ Kingkiller Chronicles, on the other hand, involves a unique magic system that is almost more like a science. The central story revolves around people known as arcanists, who practise arts like alchemy, ‘sympathy’ (a type of energy manipulation) and ‘naming’ (wherein someone discovers the ‘true name’ of a thing and therefore can control and command that thing).

As you’ll see when you dip into the vast canon of fantasy literature, there’s no end to the creativity and originality that can be channelled into a magic system.

This is another absolutely vital element within fantasy fiction. When you’re writing in this genre, your story takes place in a completely new world. (And even if your fantasy is based on Earth, it’s not the Earth we actually know.) In order to immerse readers in your world, you must develop your setting thoroughly and thoughtfully.

In fantasy writing, this process is often referred to as world-building. J. R. R. Tolkien is often viewed as the original master world-builder; the depth and detail with which he created the world of Middle-earth is unparalleled. Everything from language to societal customs to history and lore is explored throughout The Hobbit, The Lord of the Rings and supplementary texts such as The Silmarillion.

Now, don’t intimidate yourself by comparing your world-building to that of a master like Tolkien! Remember that the world of Middle-earth was his life’s work, and he spent years and years developing it. When you’re writing your first fantasy novel, it’s best to start small and build your world from the ground up.

Here are a few things to consider when starting the process of developing your setting:

There are plenty more aspects to consider when developing your setting. Check out our Ultimate Guide to World-building for an in-depth look at how to approach the process.

3. A cast of complex characters

As with any novel, it’s often the characters in fantasy fiction that truly get readers invested in the story. Your setting, plot and magic system may intrigue and engage readers, but none of these aspects matter if your readers don’t care about the characters and their outcomes.

How many characters your story contains is entirely up to you, but if you’re writing a series (as the majority of fantasy writers are), it’s better to have a cast of several main characters, as well as your auxiliary characters. This provides interest and diversity within the story, helping to sustain readers’ engagement over multiple books.

However, to sharpen focus and encourage reader empathy, you might like to consider having one ‘standout’ main character, with whom your readers will experience the majority of the story. Alternatively, if your story is extra complex and your cast of characters especially large, you may wish to have more than one of these main characters.

A good example of the latter technique is Sarah J. Maas’ Throne of Glass series, which mainly sticks with the viewpoint of main character Celaena, but expands into multiple viewpoints as the series grows in scope and complexity. (See our article on how to master alternate points of view for more on managing multiple POV characters.)

No matter which method you choose, the key thing to focus on is creating complex, flawed, believable, relatable and realistic characters. Even though your story takes place in a fantasy world, your characters should still be viewed as ‘real people’, and developed as such within the narrative.

Another of the most important things to remember when writing fantasy characters is to avoid clichés. If possible, steer clear of overused fantasy tropes, such as the farm boy who is really the ‘chosen one’ or the old, wise wizard/mentor. Unless you can breathe fresh air and originality into these character types, it’s best to avoid them entirely.

Take a look at the results from a recent poll about the top fantasy characters of all time. There’s a wide range of different types of characters here, from Death in Terry Pratchett’s Discworld series, to George R. R. Martin’s Arya Stark, to Locke Lamora of Scott Lynch’s Gentleman Bastards.

While not definitive, this list gives you a good idea of the endless potential there is for developing original fantasy characters that will truly resonate with your readers.

The key to every good story is conflict. This is especially true in fantasy fiction, where the stakes are often higher for your characters, and the story usually stretches across multiple books in a series.

There are a few types of conflict you can (and should) explore within your story:

While these different conflicts are all important, it’s vital to have an overarching central conflict within your fantasy novel or series.

The Harry Potter series is a great example of conflict in fantasy fiction. While each book contains its own internal conflicts, the series as a whole deals with one central conflict: that between the boy wizard Harry and the evil Lord Voldemort. This conflict ties all seven volumes of the series together and keeps the story moving forward at all times.

A note of caution: don’t be tempted to write in conflict just for the sake of it – for example, in the form of an unnecessary extra battle or fight scene. While you want to keep your readers engaged and excited, introducing conflict purely for the sake of creating some action will make the story seem forced and unnatural.

Focus instead on exploring conflict organically. Consider the consequences of characters’ actions and follow them on their natural course. All conflict must have a believable cause.

5. A power structure/system of government

In every fantasy world, there must be an established power structure. This usually refers to a system of government within the world. (The only exception to this is if you’ve created a world in which the ‘system’ is actually complete anarchy, but this would lead to pure chaos and might prove difficult to shape into a coherent story.)

To work out your world’s system, begin by asking one simple question: who holds the power within this world? It might begin with a single ruler, such as a king or queen in a monarchical government; it might be a high council of magical people; it might be a religious entity.

Whatever you choose, it’s vital to decide who holds the most power in your world, working your way down from there to create a power structure or hierarchy, and deciding where your characters fit into the mix.

This is a key part of world-building, as it gives structure to your fictional society. It can also be used to raise the stakes for your characters and create plenty of all-important conflict.

To help you develop your power system, it’s often useful to conduct some research into real-life systems of government in different cultures and periods of history. You can use these aspects of reality as a basis for your own system, or incorporate different elements here and there to create a unique hybrid system.

For further inspiration, take a look at this summary list of different societal structures and consider which might work best within your world and story.

For more specific guidance, consult this list of world-building questions related to social organisation. Asking yourself a few key questions about how your world works will help you get to the heart of your society and the power structure within it.

Finally, as always, it’s helpful to study successful examples from fantasy literature. A key example is the complex politics and power plays in Martin’s Song of Ice and Fire series, which are perhaps the most driving force in its plot and constitute a great example of how to incorporate a system of government with maximum impact.

So there you have it! If you’re thinking about starting a fantasy novel, be sure to consider these elements in your planning process. If you’ve already started writing, take a look back over your story and see whether all these elements are included in some way.

With these five key ingredients, you’ll be well on your way to creating a wonderful fantasy world filled with magic, conflict and compelling characters.