Do you ever find yourself with characters who are too flat? Or notice that you’re spending far too much time writing plot but still struggle with your characters’ motivations? Whether you’re a published author or an aspiring one, character building isn’t always easy.

I was first introduced to the “Iceberg Theory” when I was taking a writing seminar. Ernest Hemingway perfected this theory of writing in his own work.

It is a theory of omission, used to great effect in Hemingway’s short story Hills Like White Elephants, for example: a story that is mostly comprised of dialogue between a man and a woman as they discuss whether they should have an abortion. 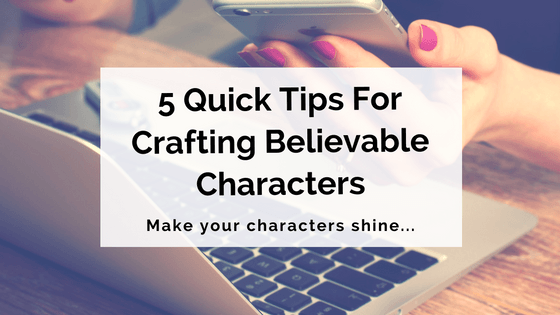 If a writer of prose knows enough of what he is writing about he may omit things that he knows and the reader, if the writer is writing truly enough, will have a feeling of those things as strongly as though the writer had stated them.”

Hemingway goes on to relate that the dignity of an iceberg’s movement is due to the fact that only a small amount—what you show the reader—is above water, while the rest—that which the author knows—is below it.

Even if it’s not included in the final work, the author must know it. Backstories are where you find the intricacies of your character.

A writer who omits things because he does not know them only makes hollow places in his writing.”

Few writers can get away solely with dialogue, and oftentimes characters are what hold a story together. So how do you find the balance between too much and too little? Let’s take a look at five top tips for creating truly believable characters in your fiction.

1. Know your characters inside and out

Although Hemingway focused on whittling his writing down to only what was necessary, many writers now focus on how to make their characters believable as people. This often involves extensive back-writing, or writing moments that have shaped your character, but won’t necessarily make it into the final piece.

This goes beyond the physical. The physical descriptions of characters are the easiest, but what do they have for breakfast? What are their worst and best childhood memories?

A quick search shows that there are many character creation sheets available to authors, but Gotham Writers Workshop has a few unconventional prompts:

When your character thinks of her childhood kitchen, what smell does she associate with it? Sauerkraut? Oatmeal cookies? Paint? Why is that smell so resonant for her?”

Try writing about things that would definitely not show up in your novel. What kind of job would your character apply for in the real world? What sorts of things would they tell their grandmother in a letter because she refuses to get a phone?

Filling in a job application or writing a letter may not show up in your novel or short story, but it provides an interesting glimpse into your character’s personality.

When writing a novel a writer should create living people; people, not characters. A character is a caricature.” –Ernest Hemingway

I can’t seem to get away from Hemingway, can I?

Rebecca McClanahan, author of Word Painting: A Guide to Writing More Descriptively, says that characters “embody our writing”. I take that to mean that a reader is going to look at how real your characters are, and judge the rest of your writing based on that.

In an excerpt from her book on Writer’s Digest, McClanahan goes through 11 steps to writing a realistic character. She discusses how to write physical descriptions in a more detailed way and how to avoid an “all-points bulletin”, or describing your character in a boring list-like format.

The more important points that she brings up have to do with a round character’s inner landscape. As a writer, you have to be aware of what’s going on in the present, past, and future of your character.

Your readers should feel as though they will run into your characters on the street as they’re rushing for a bus. If a reader feels that they could physically meet these characters because they seem so real, you’re successful.

By focusing on these sometimes mundane things (like catching a bus) in your characters’ lives, you reveal how they may act in a future situation. It’s incredibly helpful to know all those little tics of a character and how they may cause them to react.

Of course, you can’t know how they will act until you put them in a situation where they have to. Whether that’s in a setting that’s part of your written world or one completely out of it is up to you. Just write!

3. Step into the shoes of your villain

Even if you’re not planning on putting the villain’s point of view in your story, it’s a good idea to explore him or her in more depth. After all, a good villain often makes a story when you pit them against your protagonist.

Think about Harry Potter. If the villains had been anyone but Voldemort and the Death Eaters, would Harry’s story have resonated with as many readers? Creating an authentic villain is just as important as writing a believable protagonist.

I’ve always loved villains that you can relate to. People have a tendency to want to hate everything about a villain, but I think that villains who are multifaceted—and sometimes not entirely evil—are fascinating.

You can use your villain to highlight talents and shortcomings of your protagonist, but you can’t do that if you don’t know who they are.

If you look in real life, it is very hard to describe people as good people, bad people, heroes or villains. People aren’t bad people. They all have their justifications.” –Lennie James.

Find that justification. You just may find that the motivations of your villain are only a short distance away from your protagonist’s motivations.

If you find that your character hasn’t seemed to change—or hasn’t changed enough—you may have to take a look back at what sort of conflict you’ve written about and focus on how to master that conflict. Characters should be facing conflict and making decisions throughout your novel. Did those decisions show who they are and who they are becoming?

Change should be gradual and shown through those decisions. A reading pet-peeve of mine is having to read huge chunks of information that tell me how the character has changed. It’s boring. Instead, show it through their words and actions. It allows your reader to see how they’ve changed—which is more interesting than being told.

All of these exercises serve as a way for you to keep your writing muscles honed. Even on days you’re not writing plot or furthering your story, you need to write. Keep a small notebook on you and write in your downtime. Just constantly do it.

Keep a small can of WD-40 on your desk—away from any open flames—to remind yourself that if you don’t write daily, you will get rusty.” –George Singleton, Author of Pep Talks, Warnings, And Screeds: Indispensable Wisdom And Cautionary Advice For Writers

Exploring who your characters—and villains—are will be rewarding for both you and your reader. Sending them off in a different direction temporarily may help you out of that corner you’ve written your plot into. Perhaps you’ll be able to see something new from a different point of view.

Investment in your characters is an investment in your story, even if much of it ends up being the lower part of the iceberg. By having well-rounded characters, the plot and tension will come easier. Your readers will be desperate to turn the page.

If you want to be successful, you must marry all of these different parts together into a story that causes a reader to want to immediately read it again. And if you don’t have believable, jump-off-the-page characters, they won’t.

Amanda Fink is an aspiring author currently working on her first novel. She graduated with a B.A. in Creative Writing/English from Gustavus Adolphus College, where she published poems and short stories in their literary magazine. You can find her writing and reviews for upcoming YA releases on her blog.