Names are powerful. And naming a character is not a decision to be taken lightly. It can even be more important than a character’s carefully-crafted appearance. It helps create round characters.

But it’s no easy task to find the right name for your character. Whether a background character,  protagonist, or even villain, these five steps will help you nail your characters’ names. 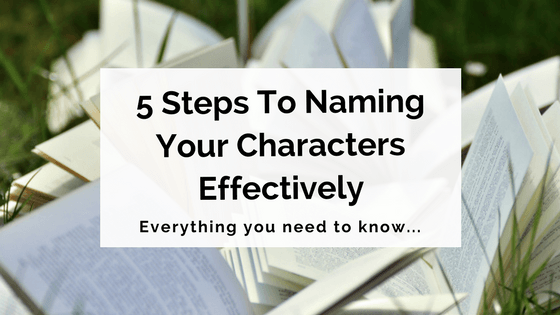 Each genre has its own naming conventions, or traditions. You may have noticed them while reading, or you may need to start being aware when you next pick up a book.

While there are no rules in writing, following your genre’s naming conventions will help you when you can’t find names that are ‘right’ for your story.

In a category romance, you’re not likely to find a name like fantasy author Tolkien’s creation, ‘Galadriel’.” — Bridget McNulty

Be sure to take note of sub-genres, and remember your target audience’s age. While naming conventions can usually work across all sub-genres and ages, you may find some interesting ideas.

For example, Marissa Meyer, author of fantasy/dystopian YA series The Lunar Chronicles, named some characters from nouns, such as ‘Scarlet’, ‘Thorne’ and ‘Crescent’. Such names add an interesting balance to the unfamiliar world that the characters live in.

Names are heavily influenced by the local culture in which the character lives. Be sure to have a solid portion of your world-building finalised before naming characters.

Remember, you can give characters placeholder names while you start writing, then later change the name. Programs such as Microsoft Word have a handy Replace word feature, which makes changing a name easy.

In a real-world culture

If your story is set on Earth-as-we-know-it, do research into the common names of the country and time period in which the story is set.

You may choose to not give all characters a common name. But to be true to the setting, it’s advised that several characters do have ‘common’ names.

In an imaginary culture

If your story is set in a location that isn’t our Earth, one option is to connect your imaginary culture with a real one. For example, you could give your elves Icelandic-style names, and your dwarves Russian-sounding ones. That way they all have a consistent feel and tone.

Think of those real places that inspire your off-world setting and think of the real people that make those places their home. Research those places to get a feel of what your fictional culture could be.” — Andre Cruz

If you’re up for a challenge, you could also create your own fictional language to use as a base for character names.

Remember who names the character

Technically the author names the character. But, remember, it is the parents who name their children. So consider where your character’s parents came from, and what their culture is.

Regardless of your character’s current standing, their parents may have been poor and uneducated, or very devout to a local religion. If your character has a bitter relationship with their parents and their ideals or situation, they may change their own name or insist on a nickname.

Some cultures involve a sort of ‘passage into adulthood’ ritual where a person can choose a new, adult name. In this case your character’s name would be closely tied with their own personality, ideals and goals.

There are so many places to find names. Some authors like to collect names, and others go searching specifically for each character or story. Good places to look for inspiration include your school yearbooks and the credits after a movies.

Random name generators can also be useful for inspiration. If you have Scrivener, check out its handy built-in name generator feature.

For era-specific names, check out popular name charts and newspapers of the correct time.

Often popular name charts gather data through birth registrations. So if you have a 40-year-old character in 1962, you’ll need to check the charts of 1922.

One very popular resource with writers are name-searches, where you can find names based on a certain meaning or language. Giving a character a name that symbolises who they are — or contradicts it — can be a powerful, yet subtle, way of defining a character.

Remember, even if you find a name with the perfect meaning, it should fit smoothly in your story. You wouldn’t name a character Minh while everyone else was Sally and Peter, unless Minh’s background permitted it.

You don’t want readers telling their friends about your book, saying, ‘This character whose name I can’t pronounce, but starts with “D”, is really funny.’ Modern readers tend to connect and relate to characters. And that makes names more important that ever.

Readers pronounce names in their head as they are reading. If they stumble on a word or name, it will take them out of your story.” — Jennifer Moss

Pronounceable names are important, because they are easier to remember. There is no need for names that you, the author, don’t know how to say. Even if you’re naming elves, they can be relatively easy, such as Tolkien’s ‘Arwen’ and ‘Legolas’.

Make sure characters are distinguishable

Another thing to be wary of is giving two or more characters similar names. Even if you don’t find it difficult to tell them apart, you reader may.

Avoid too many character names that start with the same letter. It’s also good to check that all character names, particularly major characters’, don’t have the same number of syllables or letters.

It can be a challenge to decide whether to give a certain character a common name, or a unique one. The question to ask yourself is: does this character need to stand out?

An unusual name will separate and maybe even isolate the character in the reader’s mind. If this aids in your character’s development and portrayal, go for it. If not, keep the name similar in tone to other characters.

A character’s name should not only mesh well with the nature of your story but it should also flow with the names of the characters around them.” — Toby

Having said that, you can also create a separation or rift using relatively similar names. Remember Romeo Montague and Juliet Capulet?

Being unique but functional

You may be in a situation where it is beneficial for a certain character to have an unusual, unique name, but you can’t find anything that is also memorable and pronounceable.

One solution is to take an ordinary name and tweak its spelling. Author Raymond E. Feist has done so in Magician, naming characters ‘Lyam’ and ‘Artha’. Be careful not to go overboard with this. Changing one or two letters is plenty.

Other authors have a pronunciation guide at the back of their book. However, such a guide is difficult for e-book readers to use, and is typically only found in fantasy and sci-fi.

Within the billions of options, it is up to you to find that one name that is right for your character, your story and your reader. And that’s no easy task. But with these few steps, the task won’t be so daunting.

Kyla Bagnall recently graduated from her QUT Creative & Professional Writing degree with distinction. At the astute age of 11 she announced her ambition to become an author, and hasn't looked back since. Her passion has led her through experiences with fiction, non-fiction, plus internships with a publishing house and a writer's festival. Aside from that, her favourite things are books, art, cats, tea and winter. You can find out more about Kyla’s passions at kylabagnall.wixsite.com/portfolio