Ahh, romance. Not only is it a massively popular genre of its own, it’s also an extremely common element in countless other genres and categories – from literary fiction right through to sci-fi, fantasy and young adult fiction. However, writing romantic relationships isn’t easy. Just because it’s done often, doesn’t mean it’s always done right! 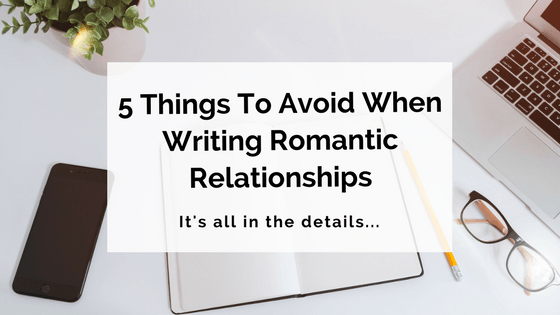 If you’ve ever struggled to write romantic elements, don’t worry, because you definitely aren’t alone. Many authors have trouble crafting authentic relationships between their characters. Even the most seasoned writers are at risk of falling prey to clichés, stereotypical character tropes, and love stories that don’t quite ring true…

So whether you’re writing a romance novel or a book in any other genre that contains elements of romance, read on for five key things to avoid when writing romantic relationships.

1. Forgetting about conflict and tension

Conflict and tension are the elements that keep all stories moving. They draw readers in, get them invested in the story and the characters, and keep them turning pages.

This is no different when it comes to writing romantic relationships. The build-up of tension, and even outright initial conflict, between two people who are attracted to each other is a huge part of what many readers love about romance.

However, there are actually two potential mistakes to be made here:

In the first instance, you might be writing a story in which there’s a great amount of plot-pushing conflict and sizzling tension between your two romantically inclined characters. But in putting so much effort into the romantic conflict and tension, you might have forgotten to inject these elements anywhere else in the story.

Now, this can be more easily forgivable if you’re writing strictly within the romance genre. After all, the relationship, its development and all its ups and downs are what romance readers are here for. But do keep in mind that there needs to be other story elements as well, and that they should involve some measure of conflict to keep the story moving.

If you’re writing romantic relationships within genres other than romance, however, you need to be especially careful to keep up the conflict and tension in your story’s other areas.

Always remember which genre you’re primarily writing in, and who your target market is.

If you’re writing fantasy or one of its subgenres, for example, by all means weave a romantic element throughout. But keep in mind that the majority of your conflict and tension should come from the other aspects of your story, such as magic, politics or a character’s quest.

(If you find yourself focusing more and more on the romantic aspects of your writing to the detriment of other plot points, perhaps it’s time to reconsider which genre you really want to be writing in after all!)

The second potential mistake to be made is building up to the climactic point in which two characters finally end up together – and then instantly forgetting about conflict and tension altogether.

It’s all well and good to get caught up in developing the build-up to a romantic relationship; as we said before, that’s a favourite aspect of romance for many readers. However, it’s important to keep that all-important conflict and tension running through your story even after your characters get together.

And even if your characters are pretty damn happy now they’re together, there still has to be some type of conflict throughout the story that will affect them – both individually and as a couple.

Stereotypical characters are found in every genre and style of book. But unfortunately, they’re a little more likely to appear wherever romance is involved.

You’ve no doubt come across some pretty unbelievable, cringeworthy or two-dimensional characters in a romance novel, romantic comedy movie, or any other story with romantic elements.

Whether it’s the broody, sulking man with a troubled past and a soft heart, the manic pixie dream girl, or simply a ‘Mary Sue’-style character, there are countless stereotypes and overdone character tropes perpetuated through romance in literature.

Luckily, there’s an easy way to avoid this! You just need to keep the following in mind at all times:

When writing romantic relationships, each character needs to be developed individually as well as in terms of their relationship.

Crafting believable characters is one of the most important aspects of fiction writing. If you can’t make each character authentic on their own, the relationship they share won’t be authentic either.

To create great romantic relationships, you first need to create great individual characters. They need to be flawed, complex and real in order to resonate with readers. None of these perfect cookie-cutter characters who lack any real substance, or who exist primarily for the sake of a romantic story element!

This is, of course, one of the biggest no-nos when writing romantic relationships.

We’ve spoken before about ‘instalove’ as one of the most common mistakes to avoid when writing YA fiction, and it’s no different when it comes to writing for adults.

In real life, nobody meets (or even just looks at) someone for the first time and immediately falls in love. Yes, there can be instant attraction – but this shouldn’t be confused with instant love.

Even if your romantic relationship is just a subplot in your story, that’s no excuse for it not to be developed properly. And besides, doesn’t establishing the romance instantly take all the fun, tension and anticipation out of the build-up we talked about above?!

No matter which genre you write in, your readers want to go on a journey with your characters, and this includes the building of their relationships.

There’s no faster way to make readers’ eyes roll than two characters falling instantly in love without any real interaction or meaningful connection. So be sure to avoid this trope at all costs.

When writing romantic relationships in your novels, it’s extremely important to distinguish between what’s healthy in a relationship, and what’s harmful.

We’re not saying every relationship you write has to be a perfectly healthy and happy one. (See our notes on conflict and tension above!) We’re simply saying that you need to be aware when you’re writing romantic elements that are actually harmful, and that you need to avoid romanticising these elements at all costs.

So what do we mean when we refer to ‘harmful’ relationship elements?

Basically, we’re talking about any aspects of a relationship that are portrayed as ‘romantic’ or even an expression of ‘true love’, but are actually unhealthy or even abusive.

Think about some of the romance stories portrayed in books, films and TV today. How many emotionally, verbally or even physically abusive characters are out there masquerading as romantic ‘heroes’? How many unhealthy relationship aspects and negative character traits have been passed off as ‘sexy’ or ‘desirable’? (Yes, Fifty Shades of Grey, we’re looking at you.)

Common character traits along these lines include:

Again, we’re not saying you can’t create characters who have these traits, or that you can’t write about an abusive or toxic relationship.

We’re saying that if you do, you need to avoid romanticising those aspects, and always make it clear that this is not what a normal, healthy relationship actually looks like.

If any element of fiction is in the most danger of being rife with clichés, it has to be romance!

Just like the stereotypical character tropes we talked about above, the language and descriptions you use when writing romantic relationships are at risk of falling into clichéd territory.

Whether you’re writing sex scenes, or simply describing the way characters see each other or feel when they’re around each other, there’s a lot of language that tends to be overused in romance writing. This includes things like:

Try to think outside the box a little when it comes to describing your characters’ feelings. What fresh or unusual imagery can you use to evoke the nuances of their relationship? How can you tie this imagery in with who they are as a character?

Experiment with words, but also remember that sometimes keeping things simple can be the most effective way of writing romantic relationships.

Let us know in the comments!