The simple structure, clear elements, and unadorned style of fairy tales are something all writers can learn from. After all, fairy tales have passed the test of time. They engage readers (or listeners) exactly because their simplicity makes for dynamic (and dramatic!) stories.

Regardless of what genre you write, here are the top five things writers can learn from reading fairy tales. 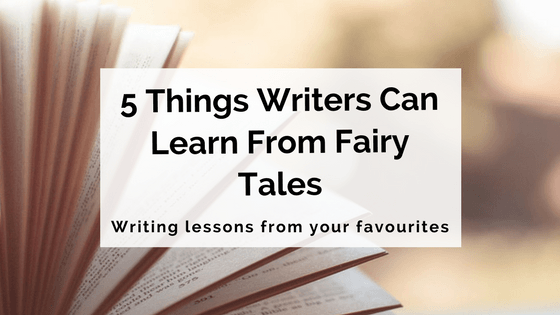 The classic ‘Once upon a time…’ story beginning immediately creates a connection with readers. It is familiar, while at the same time promising a new adventure. These are four magical words for kids, and for many adults. And that’s the point right there: the beginning of your story should be magical.

A strong beginning should:

You may think this is all too much to do in one little sentence – but it is possible. Consider these examples:

All happy families are alike; each unhappy family is unhappy in its own way.” – Leo Tolstoy, Anna Karenina

“It was a bright cold day in April, and the clocks were striking thirteen.” – George Orwell, Nineteen Eighty-Four

Tolstoy’s opening prepares us for the tragedy that is to follow. Orwell launches us into a world where clocks can strike thirteen. Barrie lays the stage for the lead character, and invites us into a universe where our laws don’t apply.

The key to a good opening is to provide enough information to hook your reader without bashing them over the head with exposition. It can be very tempting to over-inform. As writers, we are keen to bring the readers into our world – but readers should be invited, not dragged.

A strong beginning is one that teases the reader. It is not the place to convey information too overtly, but the place to set the tone. Have a look here for more examples of brilliant opening lines.

Describing a character in terms of qualities provides room for the reader’s imagination. I know what a wicked witch looks like to me. She may look different to you. Describing the same character in physical terms (i.e. tall, gaunt, and covered in warts) puts a very specific picture in the reader’s heads – and sometimes it may not be the right one.

Physical descriptions, unless used wisely, run the risk of engaging the reader’s bias in an undesirable way.

I may, for example, think that bearded men are super sexy. So, I give my romantic lead a nice, bushy beard. The reader, however, might think beards are dodgy, or remind them of their high-school maths teacher. Either way, I am setting the wrong tone for my romantic hero in that reader’s mind.

Here are a few things to keep in mind when writing character descriptions:

Many new writers feel they have to describe all their characters (and settings) in elaborate detail, but this sometimes runs the risk of losing the reader. Trust your readers – a little goes a long way. Have a look here for more tips for crafting believable characters.

The relationship between motivation and action is very interesting, in fact. Here’s a helpful equation:

Motivation is, in short, what your character wants – what gets them up in the morning. Do they want power? Love? To save/destroy the world? Motivation can be:

But motivation is not enough. For a good story, you need to provide your character with the opportunity to act. When you add a character’s personality and specific circumstances, you get action, which leads to more action, and so on.

For example, Bob is motivated by the desire to win back his ex. Bob is a shy, socially awkward guy. One day Bob bumps into his ex at his cousin’s wedding. What Bob does next is the action. The fact that he is shy means that he’s unlikely to be too direct. The circumstance of being at a wedding, surrounded by family, creates further complications.

Remember that you don’t want to set your character up through forced action. The question here is: what would Bob, with his motivation and personality, do in these circumstances? The answer will be some kind of action (or non-action, which also counts as ‘action’!). That will create new circumstances, which will lead to more action.

Bear in mind that your characters must develop. Your lead character must learn something through all the action that changes them in some way. The character arc is the transformation of your character through the narrative. A complete arc is generally achieved when the character’s motivation changes.

Obviously, novels tend to be more complex than fairy tales. But motivation still has to be clear. If you struggle with defining character motivations, Maslow’s Hierarchy of Needs can provide some helpful insight into what makes people tick.

Fairy tales are not afraid to address the darker sides of humanity (even though they are generally watered down for kids). In this way, fairy tales are brave. Also, traditionally, fairy tales did not always have a neat, happy ending.

Shadows, in psychology, refer to the darker parts of personality. In Robert Louis Stevenson’s story of Dr Jekyll and Mr Hyde, Mr Hyde was Dr Jekyll’s shadow. It’s the flip-side to the personality coin. The shadow does not have to be as literal or obvious as Jekyll and Hyde; even the most subtle shadow can help make a character complex and juicy.

So, what is your character’s shadow? Here are a few questions to ask:

More often than not, knowing your character’s shadow is enough – you don’t necessarily have to make it a big feature in the action. But it will help you keep things fresh by avoiding clichés in your narrative.

Fairy tales generally deal with big themes. There are moral lessons to be learnt or observations on the nature of humanity.

While writers may not wish to be too heavy-handed with the moralising, it is important to know what you want to say. The theme is not the plot of your story but the heart of it. It is what holds a story together – and it’s the theme that readers will be left with after they have finished reading.

Themes are the big ideas that your story explores, and while the list of potential themes is practically infinite, they do tend to focus on big topics like love and death.  The reason why these themes are described as universal is became they hold true regardless of time, place or circumstances.

One of the main themes in Romeo and Juliet is the inevitability of fate. This doesn’t necessarily mean that Shakespeare himself believed that fate was inevitable – but that was the idea explored in his play.

Here are a few examples of other common themes:

Sometimes a writer will be clear about their themes when they start writing, but often these will emerge naturally as the story develops.

Don’t worry if you find the idea of themes a bit intense – it is. But it is also very satisfying to discover what it is about your story that ties in with the rest of humanity.

No matter whether you’re writing fantasy, literary fiction, romance or any other genre, there’s so much to learn from good old-fashioned fairy tales.

What other writing tips have you gleaned from the likes of Hans Christian Andersen or the Brothers Grimm? Let us know in the comments!

Mihaela Nicolescu was born in Romania, brought up in Sweden, and then spent 13 years in London, where she completed her MA in Creative Writing at Birkbeck College, University of London. She now lives in Perth, WA. Mihaela’s stories have been published in various journals and magazines.