We’re all aware that there are certain guidelines we’re advised follow when writing fiction. These run the gamut from the old ‘show, don’t tell’ mantra to concepts like the three-act structure and its inherent story constructs.

But just how closely should we follow the established ‘rules’ of writing and storytelling? And when is it OK to break these rules and try something a little different? 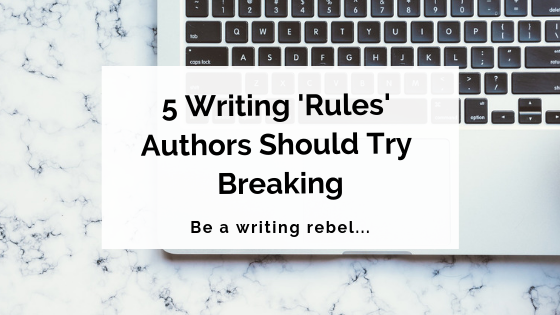 In truth, there’s really no such thing as an unbreakable rule of writing. Even storytelling standards that seem to be universal can be bent, stretched and altered in the name of experimentation – and if you do it right, you might end up with a story that’s truly unique and special, something no one’s seen before.

The key is to keep the reader in mind. As long as you’re delivering a story that’s engaging, satisfying and enjoyable to read, it really doesn’t matter which storytelling conventions you stick to and which you throw to the wind.

With that in mind, let’s take a look at a few writing ‘rules’ you might benefit from breaking.

1. Don’t give away the ending

Let’s talk about that thing feared by readers and writers everywhere… Spoilers!

Usually, the goal is to avoid these entirely. Most writing advice will encourage you to keep your story as unpredictable as possible as a way to get readers turning those pages, desperate to find out what happens next.

Yes, you can drop hints and weave in clever foreshadowing to set up what’s coming. But generally, you’re advised not to give away too much – especially not the way the story is going to end.

But indulge us for a minute. What if you did give away the ending, right at the start of the story?

Doing this won’t be very effective in a regular, straightforward, linear narrative. But it can be effective as a way to play around with story structure and reader expectations.

Experimenting with a non-linear narrative, where events are portrayed out of chronological order, is a really fun way to shake up your storytelling. It can draw readers in immediately as they realise that this isn’t your regular beginning-middle-end kind of story.

It’s a great opportunity to shake up expectations, throw in some plot twists and surprise your reader with an unpredictable chain of events that leads to the story’s conclusion.

Obviously, the breakability of this rule isn’t as easily applicable in genres like crime and mystery, which rely heavily on keeping readers guessing ‘whodunnit’ until the big reveal at the end. But in other genres, breaking this rule might lead to a unique and unusual way for you to deliver your tale.

Here’s a refreshing idea: readers don’t always have to ‘like’ your protagonist.

We know – this can be a hard thing to get past. Most writers automatically create main characters that they themselves like, and that they want their readers to like, too. And this is fine, of course; a protagonist a reader falls in love with is a protagonist whose story they’ll stick with.

However, that doesn’t mean that a story with a not-so-likeable protagonist can’t be just as engaging and enjoyable.

This is the realm of anti-heroes and flawed, complex characters. It’s a chance to avoid the Mary Sue/Gary Stu hero archetype and create a protagonist who, if not necessarily likeable, is compelling, relatable, or repulsively, compulsively readable (or perhaps even all of the above).

A quick note: the onus of being ‘likeable’ tends to be placed particularly heavily on female characters. So if you’re writing women, smash those patriarchal expectations and focus on creating a character who feels real, no matter how ‘unlikeable’ she might turn out to be.

We doubt there’s a writer out there who hasn’t been given this piece of ‘essential’ writing advice!

While it is a good thing to keep in mind to some extent, ‘show, don’t tell’ is not a hard-and-fast rule. And despite what creative writing lecturers might insist, your story isn’t automatically terrible if you don’t stick to it.

To briefly remind you, the ‘show, don’t tell’ adage encourages writers to immerse readers in the story through imagery, description and thought/emotion/action/dialogue, rather than simply stating things.

As Anton Chekhov famously put it: ‘Don’t tell me the moon is shining; show me the glint of light on broken glass.’

However, there are some instances where telling can actually serve the story better than showing, including:

So yes – while you should avoid too much direct ‘telling’ in your writing, it doesn’t mean you need to eliminate every single sentence that tells rather than shows.

An entire story that relies on showing, with no telling interwoven to break it up, would be quite a slow, arduous read indeed.

4. Write for your audience, not for yourself

Yes, yes, we know – even we just advised you to ‘keep the reader in mind’ at the start of this very article! But hear us out.

We’re not at all saying you should disregard your audience entirely. But if you start writing solely with your audience in mind, and straying away from what you’re passionate about as a result, you’ll quickly find yourself on the road towards quitting or burning out.

This breakable rule is particularly applicable when writing your first draft. That draft should be for you, and you alone. Don’t allow yourself to get caught up in worrying what readers might think or expect.

In later drafts – particularly if you’re aiming to become successful as an author – you can think about your work from the perspective of your target audience. And while this might shape your story to some extent, you should never let it take over completely.

Always remember why you started writing, and why you love the story you’re telling. That’s one rule we do insist you follow.

While more of a writing craft ‘rule’ than a storytelling one, this is something writers are constantly advised to do if they wish to be a ‘real’ writer.

But here’s the thing: writing every day isn’t possible for everyone – and even if it is, it’s not necessarily the best way for that particular writer to work.

Your ideal writing routine might not involve writing every single day, and that’s perfectly OK. Forcing yourself to write every day, even if it doesn’t really work for you or improve your process, is a surefire way to burn yourself out and turn writing from a passion to a tiresome chore.

This is one ‘rule’ that is definitely worth breaking if it’s going to help your creative process and your mindset as a writer.

If you’re experiencing a lack of confidence in your writing, or you’re having trouble turning an idea into a story, why not try breaking some of the writing rules ingrained into your own mind?

Stepping outside the storytelling ‘norm’ could be just what you need to help you write the story you’ve always wanted to write.