When you’re writing a fantasy novel, one of the most important parts of world-building is creating a magic system.

Magic is one of the essential elements of any fantasy story. How big or small a role it plays in that story is completely up to you – but no matter what kind of magic system you’re devising, you need to know it inside and out. 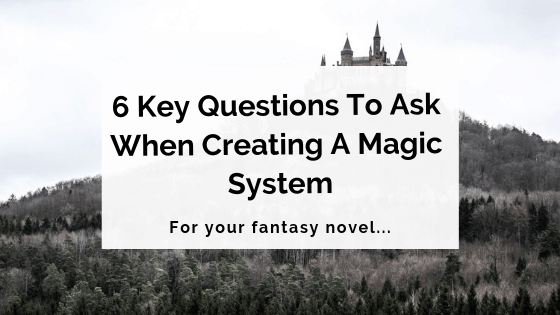 Creating a system from scratch can feel incredibly overwhelming. So we’ve put together a handful of simple questions that will help you define and refine your magic system and incorporate it effectively into your story.

Asking and answering key questions is a great way to get started with your fantasy writing, so let’s dive in!

One of the first questions you need to ask is: Who can use magic in your story and your world? When we say ‘who can use magic’, we mean two things: who is able to use magic, and who is allowed to.

This can be broken down into a few sub-questions:

Once these basic questions have been answered on a world-building level, it’s time to take things down to the story level. Start thinking about which of your characters can/will use magic, and the ways this might affect your character development and plot.

Usually, a fantasy novel’s protagonist will be some kind of magic-user. But that doesn’t mean your protagonist has to be! You might like to try flipping the oft-used ‘protagonist is the only person with magic’ trend on its head. Perhaps their point of difference is that they’re the only non-magic-person in a society full of magic-wielders.

Whatever your choice, make sure you’ve soundly established who can and can’t use magic in your world.

One of the most important tasks in creating your magic system – and one of the most fun – is establishing the ways magic can be used in your world.

This is all about the physical aspects of magic: how it is summoned, channelled and controlled by the user, and what effects it can have on the world around it.

Here are some sub-questions on the use of magic to get you started:

It’s also helpful to make a list of all the things magic can do. Magic is (usually) power, after all, so deciding what that power entails is paramount. Consider answers to the following:

You’ll expand on what you put down here when we reach Question 4 below.

The answer to this question will depend on your individual story and the way you want to tell it. In some stories, magic has a clearly defined source, but in others, it’s more of an abstract concept.

It’s helpful for you, as the author, to know the answers to the following questions – even if those answers don’t actually appear in the story itself:

Some authors like to work these insights in as backstory; others simply prefer to know these details themselves to subtly enrich their world-building.

Again, the choice comes down to your particular story and how you choose to tell it.

Back in Question 2, we considered what magic could do. Now it’s time to think about what it can’t do.

There’s no point having a magic system that has no rules or limitations. If magic is random and limitless and its users are all-powerful and un-governable, it makes for a pretty boring story – not to mention a pretty unconvincing one, even in terms of a fantasy novel.

If you’re having trouble narrowing down your magic system’s rules, try devising a hypothetical scenario for your story, and use it to explore the following questions:

A quick word of warning: it can be easy to get carried away here. Keep in mind that readers don’t necessarily need (or want!) hundreds of pages outlining every rule of your magic system.

Sometimes, it’s enough for you to know the rules yourself, and ensure they’re adhered to throughout the story. Weave them in subtly where needed, but try not to go overboard.

5. Is there a cost to using magic?

In most stories, as well as magic itself having limitations, there is a cost to the people who use it.

Once again: your story stakes won’t be very high if magic can always be used without limit or consequence.

This also harks back to the first question we asked about who can use magic. Depending on your story, you can think about the cost of using magic in two ways: as a toll that comes from the magic itself, and/or as an external consequence of using it – for example, a cost someone pays for using magic when they shouldn’t.

The price magic-wielders pay for its use can be a huge driving force behind your plot and character development.

6. How does magic fit into your world?

Our final question deals with the role magic plays within the larger context of your world.

The answer to this question tends to be explored naturally as you develop your world, setting and characters throughout the course of the story.

Exploring how and where magic fits in is a great exercise to help you get your head around the huge task that is world-building.

There you have it, writers – time to create a unique, absorbing magic system of your own!

For more fantasy writing tips, don’t miss our guide to incorporating multiple languages into your fantasy novel or our list of fantasy clichés to avoid.