Scenes drive your story forward; without them, there would be no novel. Your scenes need to keep your reader on the edge of their seat with your plot and characters because otherwise, they won’t keep reading. 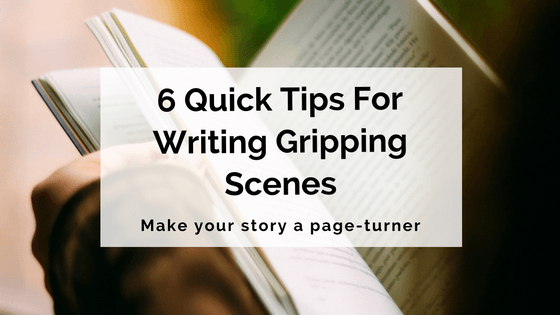 Looking at your novel on a scene-by-scene basis is a critical step in the writing and editing process. Here’s a list of six things you can do to make every scene super engaging for your readers.

You’re probably aware of the importance of structuring your novel, but having good scene structure is equally important. By structuring your scenes carefully, you will ensure your novel maintains a good pace and isn’t full of dull patches.

In his book Techniques of the Selling Writer, author Dwight V. Swain highlights the importance of creating scenes and sequels. He suggests that a scene should always be made up of a goal, conflict and a disaster, while a sequel should always contain a reaction, a dilemma and a decision.

By continually alternating between scenes and sequels, your novel will be consistently moving forward, something that makes stories a lot more readable.

A scene should start with a goal. What does your point of view character want? Their goal needs to be something specific and clearly defined for the reader.

Your character needs to be driven – they can’t be passively waiting around for someone else to step up. Setting up your character’s goal allows the reader to more easily identify with them, even if they’re not as nice or moral.

The conflict should start as a result of your character attempting to reach their goal. It’s the first obstacle they must overcome and is a critical component of your scenes – nobody wants to read a story where the character achieves all of their goals too easily.

Ending your scenes with a disaster creates a cliffhanger, something explained later on in this article. The disaster is a result of your character failing to achieve their goal. Failures are interesting to read about, and create a desire for your reader to find out what happens next.

Obviously, you don’t have to include a major/actual ‘disaster’ at the end of every scene. However, you should keep the purpose of this kind of scene ending in mind, always steering one scene towards the next with purpose.

Sequels should always be used directly after a scene to allow your readers a chance to process what has just happened.

A sequel starts with a reaction. Here, your character reacts to whatever occurred at the end of the scene before. The reaction is important because it gives your readers and your characters time to process what has happened.

The dilemma gives your readers a chance to worry about the character. Here, your character often feels as though there are no good options and that there is no way to get back on track to achieve their goal.

Finally, a sequel should end with a decision. Your character must choose what to do next, and it’s this decision that sets up the goal for the start of the next scene.

Note: Obviously, the above scene breakdown is just a guide – it doesn’t have to be followed to the letter for every scene you write. Keep this structure in mind as you write and edit, but don’t get too prescriptive when writing your scenes, otherwise they may end up sounding forced!

2. Create a strong sense of place through setting and time

This might seem obvious, but it’s important that your readers can easily tell when and where the scene is taking place. Many writers view setting as simply the backdrop for the plot; however, drawing the readers into the setting is a great way to keep them invested in your story.

It’s obvious that writing unique settings is important in a fantasy, dystopian or science fiction story. Hogwarts plays a huge role in J.K. Rowling’s Harry Potter series, and J.R.R. Tolkien’s The Lord of the Rings trilogy would not have been as successful if Middle-earth wasn’t so intricately incorporated into the plot.

However, when writing realist and contemporary fiction, setting is still an important literary tool. By setting your scenes in more unique places, your story will become more interesting.

For example, while a standard coffee shop is a relatable environment for your readers, a comic book-themed cafe or a futuristically designed restaurant make much more interesting spaces.

If your characters are regulars at their local cafe, think about why they frequent that place. Is there something about that setting that draws them in, or have you chosen it for convenience? Would your scenes work in a different environment?

Try swapping the environment for something different, like a gym with blasting music, or a space, such as a library, that’s supposed to be silent.

There is no possible way it’s raining every time your characters feel sad, or that it’s sunny whenever they receive good news. While these settings might reflect the tone of a scene, they can also feel a little too forced and unrealistic.

Your readers can tell when you’re trying too hard to make them feel something. While your settings can play a role in your character’s emotions, often subtle references are more powerful than the really obvious tells such as the weather.

Try reversing this cliché by setting your darker scenes in a happier setting. This will make your writing stand out by contrasting your reader’s expectations.

For example, a yoga class is traditionally a peaceful place. While your character might be silently engaged in the class outwardly, their inner thoughts and stream of consciousness could be in turmoil. This juxtaposes the character’s emotions with the setting rather than using your setting to reflect these emotions.

Just like real people, each of your characters have their own motivations and desires. As we touched on briefly above, these motivations should drive characters’ actions in scenes. A character who doesn’t want anything should not be included in that particular scene.

Showcase different characters throughout your scenes

Creating round characters from different cultures and backgrounds not only creates a more diverse story, but also a more interesting one. These differences give characters a unique perspective and allow them to all react differently to the same situation.

Try to think about your characters as if they are real people. It’s unrealistic to assume they will get on with everybody. If you continually put your protagonist in a scene with another character that really gets under their skin, you’re going to have scenes with more interesting dynamics.

Creating characters that clash because of their personal, cultural or situational differences is an easy way to create tension (something that we’ll discuss further below).

Every character in a scene needs to want something, and their desire should be evident to the reader. Scenes where your characters are simply going about mundane, everyday actions, or making small talk, are boring to read and don’t drive your story forward.

If this is something you struggle with, try mapping out your characters’ motivations visually. Write out what each character’s overall motivation is (what do they want to achieve or receive by the end of the novel?) and break this overall goal into smaller desires they need to acknowledge first. These smaller motivations should be what drives their interactions in a scene.

If your character interactions aren’t motivated by a specific desire, consider incorporating one or removing the scene altogether. By creating characters who all want different things, your scene will instantly become a lot more interesting.

4. Include plenty of conflict and action

We all know that conflict and action are important aspects of any story. While you don’t have to have huge action sequences or massive character breakdowns in every scene, a little bit of tension can go a long way.

Beginning a scene with conflict will help to draw readers in and ensure they continue reading. A small argument between characters, or including a character’s pet peeve, are good ways to incorporate tension in the beginning of your scenes.

Another way to begin a scene with conflict is to come in during the middle of something. If you start a scene with a gun held to your protagonist’s head, your readers are going to be pulled in. Starting the scene this way allows you to hold their attention while you explain the lead-up.

Ending a scene with conflict creates a cliffhanger, which also helps entice your audience to continue reading. It’s important that you incorporate a cliffhanger seamlessly at the end of a scene so it doesn’t feel too clichéd or gimmicky for your readers.

The emotional journey your characters undertake is an important component of your writing. While a character’s emotional development is often examined through the way they’ve changed from the beginning to the end of the novel, smaller developments can be incorporated on a scene level.

This development could come in the form of an epiphany, or by having a character end the scene feeling a different emotion than at the start. Using emotion is an easy way to incorporate conflict into a seemingly peaceful scene.

Whether or not you’ve actively thought to include them, themes are present in every story. Themes often drive the rest of the story, forcing characters to make certain decisions or plots to go in certain directions. Themes can also be used to drive a scene.

Whenever you look at a scene, you should think about the key things you want your readers to take away and remember. If a scene only has plot points or character arcs as a key takeaway, consider incorporating one of the story’s themes more prominently.

By cleverly including the novel’s themes into your scenes, your story will become more intricately developed and provide a deeper reading experience.

6. Ensure each scene has vital connections to the overall story

If a scene isn’t connected to the overall story arc, you should consider removing it from your novel. Your readers want to find out what happens; they don’t want to waste time reading a stagnant plot.

Give your readers the best experience possible by making sure all of your scenes are connected to the story’s progression.

Every scene in your novel should be connected to the big picture. Everything you include in a scene, whether it’s a conversation between characters or a reference to an object, needs to be pushing your plot towards the ending.

This idea is expressed in the screenwriting technique, Chekhov’s Gun. Russian playwright Anton Chekhov proposed that if you mention a gun in the first act, it needs to be fired in the second act. This technique can be applied to any references you make to seemingly unimportant objects: if it actually is unimportant, it’s best not to give too much attention to it.

If you take the time to work through your novel scene by scene, you will instantly improve the quality of your work!

Emma Johnson is a Freelance Writer and Editor from Brisbane. She has a Bachelor's degree in Creative and Professional Writing and Public Relations and is currently completing a Master's degree in Editing and Publishing. She has worked as a copywriter/editor for a variety of magazines and loves nothing more than curling up with a book and warming her hands on a hot mug of coffee. You can follow her reading and writing progress here.