As a writer, you’ll hear feedback about your work in many different contexts. Notes from your editor; comments from beta readers or writing group buddies; reviews from readers… There are so many avenues for responses to your writing – and not all of those responses are going to be positive. 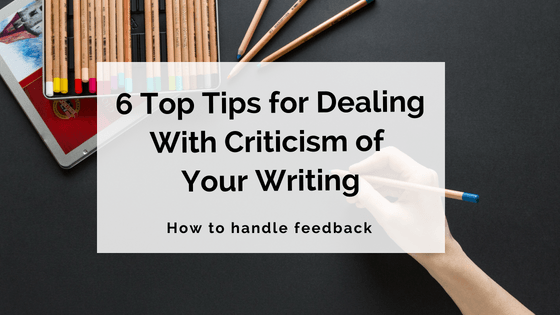 So what do you do when you receive criticism of your writing? How do you bounce back and use it to improve your craft?

Read on – we’ve got six essential tips for dealing with criticism coming your way.

1. Take a breath and a step back

The first thing to do when receiving any sort of criticism of your writing is to take a breath, and distance yourself from the critique.

It’s easier said than done, but try not to take critiques personally. Always remember that it’s criticism of your writing, not of you as a person (and if it is personal criticism of you, it’s the work of a troll and absolutely not worth listening to).

If you let every piece of criticism get the best of you, you’ll never be able to survive as a writer. So you need to learn how to accept, use or ignore criticism, and how to rise above the negative feelings it might instil in you.

A bad review hurts, no doubt, but I try to remember that even though negative criticism can, at times, make me feel small and wounded and afraid, it will only paralyze me if I let it.”

If you’re feeling disheartened, offended or overwhelmed by criticism your work has received, take a step back. Come back to deal with it later, when you’ve had time to put things back into perspective and you’re feeling more confident.

2. Determine whether the criticism is useful

Something to note: not all criticism you receive over the course of your writing career will be useful.

It depends on the source the criticism is coming from. An experienced editor, for example, can be trusted to give useful feedback for improving your writing. Criticism from a casual reader, on the other hand, shouldn’t necessarily be treated as gospel (more on dealing with reader reviews below).

Anytime you receive criticism of your writing, take a moment to consider whether it’s actually useful, or whether it’s not worth stressing over.

One way of identifying what’s ‘useful’ is if the same issues keep cropping up in multiple people’s critiques.

When working with beta readers or a writing group, for instance, you can’t possibly incorporate every change that’s suggested (in fact, doing so would make for quite a messy manuscript). But if more than one person has expressed a problem with the same aspect of your piece, that’s a pretty sure sign it’s something that needs changing.

Another way to help you decide what you should and shouldn’t take on board is to be wary of critiques that are too specific. As the wise Neil Gaiman once said:

3. Don’t read or respond to your reviews

Now, we understand that some writers might like to keep an eye on their reviews on sites like Goodreads and Amazon. But while we do think that authors (especially indie authors) should use Goodreads, we don’t recommend reading all (if any) of your reviews in these places.

Why? Because these reviews aren’t for authors – they’re for readers. They’re simply opinions, put forth for the benefit of the online reading community, not as a professional critique intended for the author.

We know it can be hard to stay away, especially if you’re seeking a confidence boost from a couple of five-star reviews. But trust us: it will be the one- and two-star reviews that you end up getting hung up on, and it’s not worth it.

It’s totally up to you, though. If you feel you want to and you can handle it, it’s completely your choice to read your reviews. But if you do, we have to insist on one golden rule: never reply to negative reviews.

Don’t engage with the reviewer in an attempt to defend yourself or argue over their criticisms. It’s not a good look, and it really won’t achieve anything for you in the end. This person has formed their opinion, and they’re unlikely to be swayed from it – and that’s OK.

Not everyone will love your writing, and it’s not your job to defend it to those who don’t.

Unfortunately, even if you choose not to read your reviews, you might come across some overzealous readers who seek you out directly – perhaps via your website or social media channels – to tell you exactly what they didn’t like about your book and why.

In this case, our advice is the same: don’t engage. Just ignore the unsolicited criticism and move on. As we suggested above, focus on the critiques that are helpful and useful – the ones that will actually help you improve your writing.

Writing is such a subjective art. There’s no such thing as a perfect piece of writing, or a book that everybody likes.

No two people will have the exact same opinion on a piece of writing; in fact, it’s common for many people to have the exact opposite opinion about the same piece, each having had an entirely personal and unique experience reading it.

With this in mind, it’s important to remember when dealing with criticism that it is just one person’s opinion on your work. It isn’t the be-all and end-all of your writing career; it’s just a single view that may be shared by some and completely opposed by others.

Someone might have a very particular idea of how you should write something, but in the end, it’s your work, not theirs. You have to be happy with what you put out into the world; it’s ultimately up to you to decide what feels right and to stay true to yourself.

Keeping this in mind can really help when you’re feeling bombarded or confused by a number of different critiques.

5. Rein in the self-criticism

Writers are always their own harshest critics. While this can be somewhat helpful when you’re editing your novel (kill your darlings and all that), it can also be destructive and detrimental to your mental health as a writer.

Receiving negative feedback on your writing can be pretty crushing, no matter how constructive that feedback might be. So when you are having a hard time coping with criticism from others, you need to be a little easier on yourself.

You can agree with the criticism you’re receiving, and realise that your writing needs some work, but don’t let yourself go down the rabbithole with thoughts like ‘Oh, they’re so right, my work is terrible, I should just give up’.

Instead, remind yourself: ‘My writing is not terrible; I just need to work on fixing these few things, and it will be much better for it’.

Something else that can help: for every piece of tough criticism you receive from others, identify one aspect of your writing that you really love. Find the parts of your story that you’re proud of to give yourself a much-needed confidence boost, and to remind you why you love writing.

6. Talk to other writers

Remember when we espoused the benefits of being part of a writing community? Those benefits come in especially handy here.

If you’ve received some criticism that you’re finding it hard to deal with, or aren’t sure what to do with, talk to a writer friend or your writers’ group. Fill them in on the critique, vent about how it makes you feel, and see if they have any suggestions on what to do with it.

An educated outsider’s perspective can be so valuable. You might be too close to your writing to be able to see whether the criticism is valid or not, but another writer will be able to provide a more objective view.

They’ll also be able to empathise with the negative emotions that can accompany criticism. If you find yourself feeling hurt, confused or riddled with doubt, they’ll know exactly how you feel.

Sometimes even that in itself can help you cope better with criticism.

What are your best methods for dealing with criticism of your writing? Share them with us in the comments!

Claire is a freelance editor and proofreader based in Newcastle, Australia. She holds a B. A. in English and Writing and a Graduate Certificate of Editing and Publishing. Claire's biggest passion is working on editorial projects, particularly when it involves perfecting book manuscripts for publication. In her spare time, you’ll either find her reading or drinking endless cups of tea while writing things of her own.