So you’ve got a killer idea for a fantasy novel. That’s great! It’s a beautiful feeling; that newness of an idea. We get it.

Your idea has ignited your imagination with world-building possibilities. Your characters are whispering sweet nothings into your ear about motive and magic.

But where’s there’s magic, there must be a system. Boring, right? 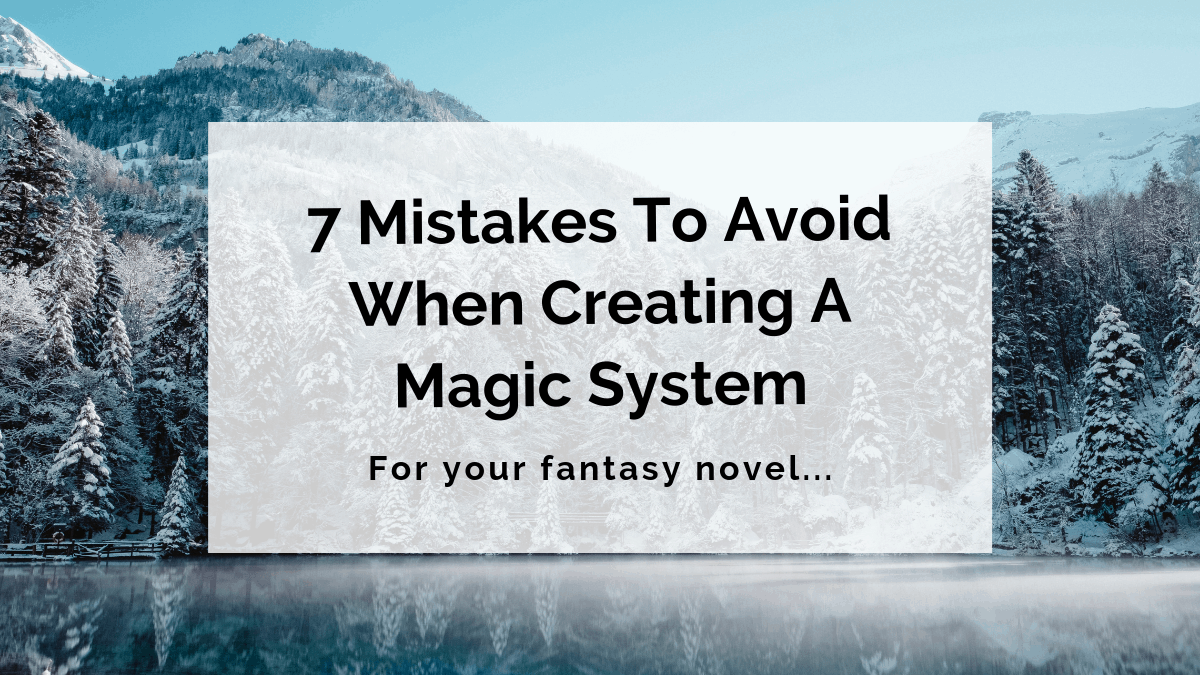 Nope. It’s quite the opposite.

A well-developed magic system will bring your writing to life, make your fantasy novel one that readers will fall in love with.

But there are certain pitfalls and mistakes that you need to avoid when creating your magic system. To help, we’ve outlined seven such mistakes – and how to avoid them.

For your readers to understand how your magic system works, you need a framework. Without one, you don’t have a system.

The framework of your magic system is kind of like a set of rules or general statements about magic in your world. It determines factors such as the source of magic, how magic is conjured, the type of beings that can use magic and the consequential hierarchies of status and power.

A framework such as this provides you with the structure for your magic system, which allows you – and your readers – to understand the intricacies of that system.

It also gives clues about how the society in your fantasy novel functions, and provides hints to the reader about conflicts that might arise.

Once created, a framework provides you more freedom, as a writer, by giving you boundaries and challenges that your characters must navigate and overcome.

Building a framework for your magic system will also unearth inconsistencies. Finding inconsistencies early on is good. It’s easier to change and fix things in the early stages of planning and writing your fantasy novel.

A framework will also dig up character gold. The opportunity for conflict will twinkle just under the surface, ready to be excavated, polished to a dazzling shine, sprinkled throughout your novel and coveted by your readers.

Not having a framework means your readers won’t understand the constraints of your magic system. Restrictions add essential tension and conflict to your plot.

Constraints in your magic system will also bring depth to your characters and breadth to your world-building.

In all of life, boundaries and rules exist to govern how society works. Constraints on how we act as individuals keep society functioning.

Everyone knows the rules and the outcomes of breaking those rules. Weaving constraints into your fantasy novel’s magic system will provide your reader with clarity.

Clarity is plausibility. Plausibility is believability.

When a reader believes in your story, they will step into the world you’ve created for them with trust and eagerness, keen to discover and grateful that you haven’t insulted their intelligence.

Mistake #3: No Consequences or Sacrifice

If the magic in your novel doesn’t result in any kind of consequences or costs to the characters who use it, your magic system simply isn’t realistic. (Yes, you may be writing fantasy, but unrealistic storytelling never sits well – with any type of reader.)

In fact, a fantasy novel without consequences or sacrifice goes against the very fundamentals of the genre.

As we mentioned above, a magic system should have rules, boundaries and limitations. Using magic must cost your characters something. There must be sacrifice. Times of self-doubt. Difficult decision-making.

Readers want to know how driven by motivation your protagonist is. How far they will go to achieve their goals. The strength of their convictions. The price they’re willing to pay – what they’ll give up, and what they’re even ready to die for.

Consequences within a magic system that call on your characters to sacrifice strength, time, friendship or innocence, for example, give your fantasy novel the in-depth character development, tension and conflict that all good storytelling needs.

World-building is essential. However, it’s also essential avoid the mistake of overwhelming your readers with too many world-building details all at once.

To avoid the dreaded info-dump, give your readers enough information to understand how one part of your world works before you introduce any more. In terms of your magic system, it’s best to allow the details to unravel naturally and gradually where possible.

Never bombard readers with so much information that the pace of your fantasy novel slows. This mistake causes readers to work too hard, or to become tired of reading paragraph after paragraph of description or exposition.

The ways your fantasy society functions sets the tone for who your characters are and how they behave within the worlds you’ve created for them.

Avoid the mistake of glossing over how your magic system impacts the society your characters live within.

If, for example, only one type of person can use magic, then how do other people within your society react to this limitation?

Do they protest? Is there a control put on magic-users by which they can only use magic between certain hours of the day, or use it only for certain purposes – or perhaps they’re not supposed to use it at all?

As we’ve mentioned above, having consequences in your magic system provides tension. Extending this tension to society and how magic affects the characters within it will make your world-building much more vivid.

Your magic system has an important place in the story you’ve created. But avoid the mistake of relying solely on magic as a means to solve all conflicts between your characters.

Leave room in your fantasy novel for the intricacies of characters and their relationships.

Make room for their vulnerabilities and their strengths. Show your readers how your characters handle the world, how they interact with others around them, and how this can both create and solve conflict.

Relying on magic to solve all character conflicts will rob your readers of truly getting to know your characters – something you definitely want to avoid.

The first draft of any fantasy novel will show up gaps within your magic system, as well as your world-building, plot, and character development at large. But don’t worry – this is a good thing.

That’s the point of a draft: to get the skeleton of your story down so you can see any parts of the body of your work that need fixing. And it will need fixing. All writers, even the greats, edit their first draft.

After you’ve spent time editing your novel yourself, it’s helpful to pass it on to people whose opinion you trust, such as a team of beta readers.

There are, of course, more than just seven mistakes to avoid when writing a magic system for your fantasy novel.

But ensuring you avoid or address the above issues is a great first step towards creating a magic system that readers will enjoy – and writing a fantasy novel you can be proud of.

Flavia is a freelance writer based in Tasmania. She's previously worked in corporate marketing, PR and communications. Has a B. A. in Business, Advanced Diploma of Arts: Professional Writing and Editing, and a Certificate of Freelance Journalism. Flavia now dedicates her time to writing full-time and helping others realise their own writing dreams. Flavia is considering resurrecting a long ago shelved first draft manuscript. Flavia is a cat person.