Let’s start off with a fact: most (if not all) first drafts are terrible. Even Ernest Hemingway says so.

There’s not really any avoiding this, not even for the most talented or experienced writer. But when you think about it, the concept of a less-than-stellar first draft is actually quite liberating. It means you’re free to write without expecting too much of yourself, without constraint or worry or overthinking.

At least, that’s how it is in theory. But in practice, many writers still suffer from worries and setbacks during their first drafts. It can be hard to completely let go of what’s holding you back and just write, write, write. 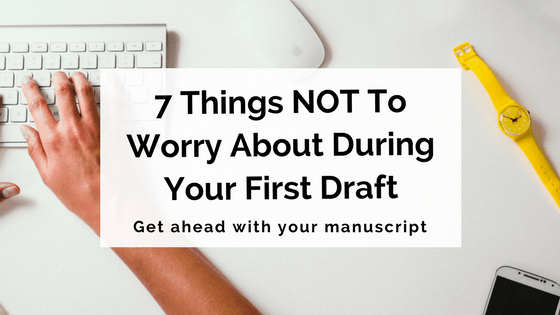 If this sounds familiar – if you’re in the midst of a first draft and finding yourself stalling, stressing, or stuck – read on. We’re about to cover seven things you DON’T need to worry about during your first draft.

After all, what are second (and third, and fourth) drafts for?!

Here’s the first worry you should banish while working on a first draft: ‘the quality of my writing isn’t up to scratch’.

We don’t say this to convince you that it is up to scratch; we say it because it absolutely isn’t, and that is absolutely OK.

Nobody’s first draft reads like a beautiful bestselling novel. In fact, most writers’ first drafts don’t read very smoothly or elegantly at all. And the sooner you understand and accept this, the sooner you’ll finish that draft.

We understand that many writers are perfectionists (especially if you also happen to be a freelance editor). You might be in the habit of writing and rewriting each sentence as you go, constantly doubling back to read and edit when you’ve just written.

While this kind of perfectionism isn’t necessarily a bad thing, it’s far from ideal when you’re working on a first draft.

Revising and editing as you go makes for an extremely slow process, and can therefore halt the momentum of your storytelling. Obsessing over writing quality can also stilt your creativity – the last thing you need during your first attempt at writing your story!

Word choice, sentence structure, technical details like spelling and punctuation: these can all be set aside and worked on in later edits. For now, just let the words flow however they will so you can get the story on the page.

Just remember that the first draft is as bad as the book is ever going to be.” —Robin Stevens

Finding your voice and developing a unique writing style are among the trickiest things you’ll do as an author. For this reason, we recommend that you don’t focus on them during your first draft at all.

It won’t be the most polished or perfect thing first time around, but it will give you something to work with later. The essence of your writer’s voice will be there, ready to hone and refine.

First drafts are not the place to be obsessing over the perfection of your writing style. First drafts are for getting lost in the story as you tell it to yourself. Working on the way you tell the story is strictly for the editing phase.

If you’re a ‘plotter’ rather than a ‘pantser’, you’ve probably considered your novel’s structure in great depth in your pre-writing planning process. But don’t fall into the trap of trying to perfect your structure before even starting to write.

Despite it being a bit of a cliché, the old ‘can’t see the forest for the trees’ adage is perfect for this situation.

When you’re drafting, write whichever way works best for you. If it’s easiest to simply dash things down in the order they enter your head, do it. Don’t worry about whether your structure makes sense or is effective and engaging.

Don’t worry about little structural things, either, like breaking chapters in the right place. All of this can be fixed later, when you have a completed draft to work with and can see the bigger picture with a fresh perspective.

After all, what else is structural editing for?

I’m writing a first draft and reminding myself that I’m simply shovelling sand into a box so that later I can build castles.” —Shannon Hale

We all love reading a novel filled with beautiful descriptions. Whether it’s a vividly painted portrait of a setting, or a detailed description that helps us picture a character, descriptions immerse us in the story and make it that little bit more ‘real’ for readers.

During your first draft, however, it can be all too easy to agonise over descriptions, rather than focusing on getting the story down.

Dawdling over descriptions and taking too much time to perfect them the first time around is a surefire way to slow your momentum when drafting. It can even become a method of procrastination, helping you avoid getting on with some of the more difficult elements of a draft.

Our advice: unless description flows quickly and naturally from your fingers as you’re writing your first draft, leave out the details and come back to them later. In your revisions, you can work on layering intricate details and painting a more vivid picture for readers.

The first draft is a skeleton … just bare bones. The rest of the story comes later with revising.” —Judy Blume

Good novels tend to be rich in their thematic content. After all, one of the most prominent functions of books is to make us think and reflect – about ourselves, our world and the nature of life itself.

When you consider what a book is about, there are two components: its plot and its themes. Plot is what happens in the story; themes are the ideas that arise from this. As Courtney Carpenter at Writer’s Digest suggests:

To put it in its most simple terms, theme is what our story means. How it relates to reality and life in general. What is says about life and the infinite roster of issues, facets, challenges and experiences it presents.”

Now, this is all well and good – until a writer starts worrying about themes during their first draft.

If you’re finding yourself stressing about your themes while you write your first draft, not only will you be held back from letting the story flow, you might also risk forcing themes into your novel. And if there’s anything a reader can spot from a thousand miles away, it’s a theme being shoved in their faces or spoon-fed to them.

Now, we’re not saying you shouldn’t think about themes at all while drafting your novel. Rather, we’re recommending that you have a basic idea of the themes your story might cover, but also realise that many of your themes will be explored unconsciously.

It won’t be until you finish writing and revisit the story that you realise what your themes truly are. Then, you can work on exploring them further during the revision process, fleshing them out with nuance and depth.

First drafts are for learning what your novel or story is about.” —Bernard Malamud

Picture this. You’re writing away on your first draft, then you pause briefly to consider a small detail. Your character might be utilising a weapon, for example, and you might want to make sure it’s the right type; or you might wonder whether the weather conditions you’ve written are viable for your story’s location.

‘I’ll just check this quickly,’ you think, jumping onto Google… But before you know it, you’ve disappeared down a research rabbit-hole, and all your precious writing momentum is lost.

If so, you might not be writing as smoothly, quickly or effectively as you could be. You might be wondering why you’re not making as much progress as you hoped, or why the story isn’t quite flowing as you write.

To combat this, you need to get into the habit of passing over minute details and flagging them to come back to later. Treat them as speed bumps rather than road blocks during your first draft; pass over them and keep your momentum going.

This can be especially difficult for speculative fiction writers. When you’re writing fantasy and sci-fi, world-building is such a huge part of the process, and detail is often extremely important.

But remember: you can always come back and layer detail over your story in later drafts, and you can check everything for logic and consistency during the editing process.

Don’t get it right – get it written.” —James Thurber

Now, don’t get us wrong – we’re big fans of planning when it comes to novel-writing. If you outline your novel, you’re more likely to be able to push through the first draft quickly and efficiently using that rough sketch to guide you.

However, sticking rigidly to an exact outline can sometimes do more harm than good. You might risk stifling your creativity and restricting your story’s potential.

Remember to leave yourself free for the joy of discovery. If your characters suddenly take you down an unplanned, unfamiliar path, don’t be afraid to go with them. If your story starts taking a different direction than the one you intended, try it out and see what happens.

You can always revert to your original plan later if it doesn’t work. During your first draft, just enjoy the process and allow the story to unravel as naturally as possible.

The first draft is just you telling yourself the story.” —Terry Pratchett

Writers, what are your tips for overcoming difficulties with a first draft? Share them with us in the comments below!