Debra Adelaide is an Australian author, editor and academic. Her first novel The Hotel Albatross, was published in 1995 and her other books include edited collections, such as A Bright and Fiery Troop (Penguin, 1988); the Motherlove series (Random House, 1996, 1997, 1998); and Acts of Dog (Random House, 2003).

Her novel The Household Guide to Dying was published to critical acclaim in Australia in 2008 and her most recent collection of short fiction, Letter to George Clooney (Picador 2013) has been long- and short-listed for several literary awards.

Now, Adelaide has just published The Women’s Pages which explores “the choices and compromises women make, about their griefs and losses, and about the cold aching spaces that are left when they disappear from the story”.

Below, we chat to Adelaide about how the publishing industry has changed over the years, how literary awards can impact a career, and finally, about the inspiration behind her latest novel…

Your first novel Hotel Albatross was published in 1995, and you’ve been publishing books ever since, The Women’s Pages being the latest. As an author, what changes have you seen in the publishing industry over the years?

Huge changes, everywhere, but I’ll mention just a few. My first book was actually published in 1989 by a UK publisher, Pandora Press. The advance was a couple of thousand pounds, and this was for a very specialist reference book (Bibliography of Australian Women Writers). This would be unthinkable these days, not just an advance of that size, but even the prospect of having such a book published, which now would only ever be viable as a digital publication.

And that first novel, The Hotel Albatross, also received a very generous advance, at least generous for a first novel. Now it is normal for authors to receive no advance or tiny ones. I’ve been lucky, having received huge advances as well as token ones over the years.

So the main changes I’ve seen in the industry are financial: what this means now is that an author could not hope to live off an advance for a precious six months or even a year, as they once did, in order to write.

The other major change is in the restructuring of publishing houses so that books are no longer cross-subsidised, meaning that income from a publisher’s ever-popular YA title or gardening compendium is no longer used to support a more fragile species, such as poetry. This is a great shame, and over time has led to the devaluation across the board of poetry, drama and so on, and perhaps to the elevation of less literary work.

And of course then there’s the internet which produces the curious phenomena of books like Fifty Shades of Grey: its prominence, success, indeed very existence, would be impossible without that.

What I should say, though, is that despite all these changes something very fundamental about the industry remains: in my experience a publisher will still consider a good book, and readers abound. Bless them!

Your collection of short fiction, Letter to George Clooney has been long and short listed for several literary awards, how has this impacted upon your career as an author?

I don’t think this has changed anything about my career, but it is definitely wonderful to receive such validation. The one shortlisting that really meant something to me was in the Queensland Literary Awards, since these awards had been claimed back by the literary community from the thuggish former government that trashed them.

The year the Newman government cancelled the state awards, authors and others in the industry banded together and worked on them in a voluntary capacity, awarding the prizes totally unfunded. That was so heartening, and thus lovely to be part of, even in a tiny way.

The Women’s Pages covers the secrets and silences of ordinary women. What drew you towards this subject?

I had written the story that is inspired by my re-reading of Wuthering Heights, ‘The Sleepers in that Quiet Earth’ (the last words of that novel) and realised it contained a huge hole: the character called Ellis had no mother, and I needed to find out why she was missing, and how that had shaped this character’s entire life.

That led me to thinking generally about the way women are represented in stories, and in life (or were) and how too easily they have been written out of the story. That term ‘ordinary women’ is so contentious: of course I use it myself to describe Ellis, but as I wrote this novel I was also conscious that no individual is merely ordinary, and everyone’s life is special, unique.

The so-called ordinary and often domestic side of women’s experiences have too often been dismissed as unimportant. Much of the novel is set in the late 1960s and early 1970s, which is when women were starting to crack open this silence about their experiences.

The Women’s Pages is also in a way, a love letter to literature and writing itself. What was it about Bronte’s Wuthering Heights that inspired you to include it in the way that you have?

Yes, it is a love letter to that novel, and to Emily Brontë’s extraordinary achievement. I had re-read Wuthering Heights yet again and marvelled at its potent narrative gaps. Entire parts of the story that are vital, such as the relationship between Cathy and Heathcliff, are actually not there in the text.

We read this novel as a portrayal of their fierce passion, but in fact these characters never spend time together as adults except in scenes of great conflict.

And the other remarkable thing about this novel is how there is no representation of a whole, functional family: there are dead and dying mothers (and fathers) everywhere.

The main narrator Nelly Dean is manipulative and judgemental but also successfully presents herself as benign. And the structure is fascinating (also frustrating!) with its many narrative layers.

So to me the novel is about the power of narrative, and of the imagination, and about how stories collide with each other to represent different versions of the truth to determine how people act from then on.

There is one brief but powerful scene in Wuthering Heights (when Nelly allows Heathcliff to overhear something Cathy says, over which he nurses a terrible sense of shame): in The Women’s Pages I wanted to explore these small, seemingly insignificant moments — gestures, comments, and so on — to see how they can ripple throughout people’s lives forever.

In recent months, the subject of gender bias in publishing has been raised in the media quite frequently. Have you ever experienced this first hand as a female author?

Yes I have, at the hands of ignorant and arrogant male book reviewers! But it’s not a good idea for authors to dwell on negative reviews (or even read them). I don’t believe I have suffered in any other way and I must say that almost all of the people in publishing who have supported my work have been female.

As someone who has worked as a freelance writer, a teacher and an author, what can you tell us about the nature of the writer’s ‘job’? Has this changed over time for you?

In some ways this is such a variable thing. You can be in full time employment (as I have been for the past 12 years) or work three nights a week in a bar or almost luxuriate with a literary grant or a handsome advance, but my experience is that the fundamental thing about the job never changes: the job of the writer is to sit down (or stand up, like Virginia Woolf) and write.

It doesn’t matter if that is for an hour every morning, or for five days a week, or every other Sunday afternoon. If you sit and write then words will come, pages will add up and eventually a book will emerge.

My experience is that the best work I’ve written is when I’ve been working full-time. I might grumble about this but the fact is that this imposes an immense need for discipline (or perhaps it’s just desperation…) that keeps me focused.

How has The Women’s Pages been received so far?

It’s early days yet, but so far very well. And in fact the very first review that came out, in the Guardian, was such an astonishingly positive and insightful one that I was overcome with a strange mix of pride and awe and gratitude.

It means so much when a reader, someone you don’t know, actually understands your work, and in this case articulates things about the work you didn’t quite realise you were doing. That has been wonderful.

What’s next for you? Are you already working on a new writing project?

I am thinking, thinking, thinking. Plotting actually, to steal some proper writing time again after a long and busy year. I have several half written stories I am going to complete, and ideas for a few more, plus there is the glimmer of an idea for a new novel. But we’ll see. 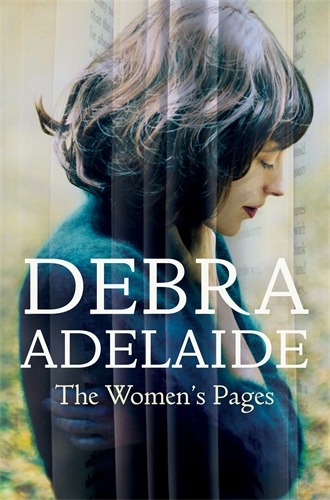 Writer’s Edit would like to thank Debra Adelaide for taking the time to share her insights with us.