In 2012, Jess Walter’s sixth novel, Beautiful Ruins, was published to much critical acclaim. Esquire magazine and NPR’s Fresh Air podcast both named it the best book of 2012, it also made the New York Times and Chicago Post lists of notable books for the year, not to mention the hundreds of other literary sites and publications that labelled it a ‘must-read’. It was, and still is, a much-loved book.

I am naturally wary of books that garner so much praise, not necessarily because I don’t believe the hype, but more because I am worried that it will sway my judgement of the book. Luckily for me, I somehow managed to avoid the hype surrounding Beautiful Ruins at the time, and picked it up a couple of weeks ago without knowing too much about it – which is why I can say I loved it on my own terms, and agree whole-heartedly with all of the praise that it received. 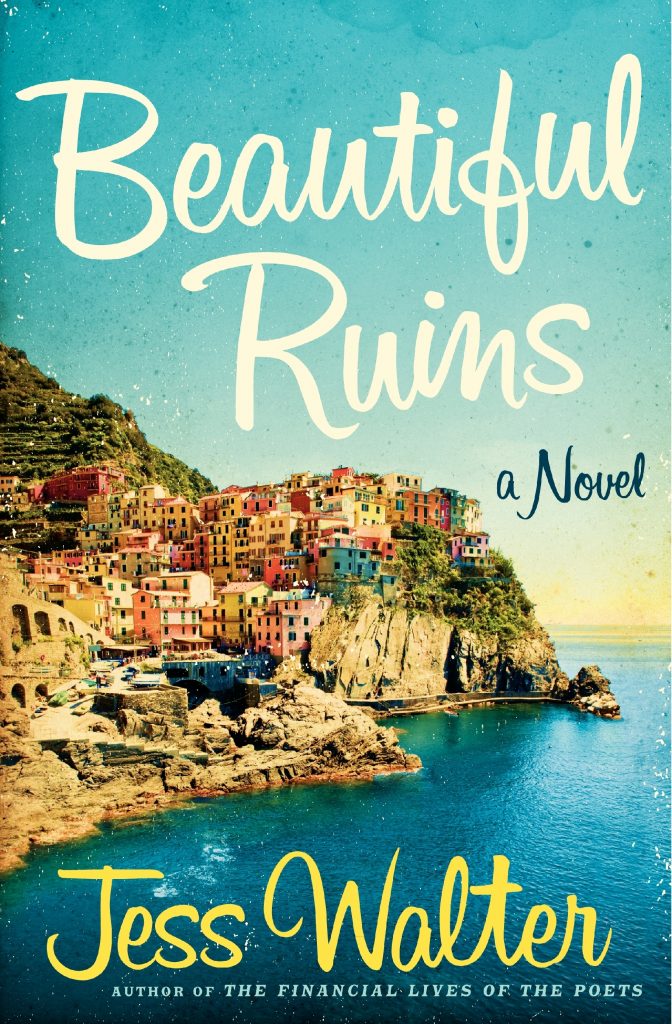 Beautiful Ruins opens in the small fishing village of Porto Vergogna in Italy in 1962, where we meet struggling hotelier Pasquale Tursi. Despite its close proximity to the towns of Cinque Terra, Porto Vergogna is isolated, ignored and, at times, ridiculed – all of which only serves to fuel Tursi’s enthusiasm and blind faith that the Americans will come. All that stands between them and the tourist-infested Cinque Terra is a beach, which is where we meet Tursi: half-submerged in the ocean, moving rocks and shells, heaven and earth, to create the sort of beachside haven that tourists scour the earth for.

Tursi’s hotel, The Hotel Adequate View, already has one regular American visitor: Alvis Bender, a failed writer who comes to Vergogna every year for a month to ‘work’ on his novel, but spends most of his time drinking and reworking the one chapter he has already written.

When a second American arrives, the beautiful Dee Moray – an actress sent from the set of Cleopatra under mysterious circumstances by film magnate and all-round horrible guy, Michael Deane – Tursi believes his fortunes are changing.

From this half-formed beach on the coast of Italy in 1962, we travel to a Los Angeles of recent times where an obsession with the digital world, reality television and plastic surgery has transformed Michael Deane into a 72-year-old millionaire, aggressively fighting the ageing process:

It’s not just that he gets younger-looking each year, that’s common enough here; it’s as if he is somehow transforming himself, evolving into a different being altogether, and this transformation defies any attempt to explain it.

In between these two extremes – the thoughtful, kindly Tursi in a small Italian village, struggling with a humble dream, and the selfish and obscenely rich Deane living in the “rubble of the entertainment regime” – Walter creates a rich and beautiful story that shifts seamlessly between the two central narratives. We detour into the lives of minor characters, and even briefly into the lives of people who have seemingly no stake in the story, but whose contribution serves the richness of the book.

Part of Walter’s brilliance is his ability to change his tone and style along with the locations: when we are in Italy, the tone is melancholic and beautifully poignant, but in LA it’s terse, witty, cynical. He takes the known differences between the two countries and reflects them in the writing.

Perhaps it was the difference in age between the countries—America with its expansive youth, building all those drive-in movie theaters and cowboy restaurants; Italians living in endless contraction, in the artifacts of generations, in the bones of empires.

The multi-perspective narrative is also put to perfect use in this novel. Sometimes with this style, there will be a character that you don’t enjoy reading about, which leads to a sense of dread or disappointment when you arrive at their chapter. But with Beautiful Ruins, while I may not have loved every character (Deane was hard even to like), I was completely fascinated and interested by them all. Walter knows just how much time to spend with each character to keep the story moving, and the way he plays with form just adds to the success of the novel. While most of the book is written in a regular narrative style, there are also chapters written as film scripts, another that is a chapter from someone’s memoir, and others that are small vignettes, which add to the incredible depth and texture of this novel.

Beautiful Ruins explores a multitude of themes familiar to most of us. But at its heart is the idea of doing what we want, as opposed to doing what is right, or finding a way to align these two things.

…a man wants many things in life, but when one of them is also the right thing, he would be a fool not to choose it.

It is about finding a way to get what you want and deciding what price you will pay to get it – how much of your soul will you sacrifice to choose the path that leads to your dreams? And can we still be happy if we choose not to chase our dreams at all?

And, of course, the book is about love. Powerful, consuming, devastating love, as well as the quiet love that grows over time, and the messy love that we so often experience in families. “This is a love story,” Michael Deane says. “But, really, what isn’t?”

When Beautiful Ruins first came out, some of the words used to describe it were “lyrical”, “heart-breaking”, “witty”, “audacious”, “vivid, “engrossing” and even “miracle”. In fact, there are not many positive adjectives that haven’t been used to describe it, so to add any more of my own praise would do no good.

Words and emotions are simple currencies. If we inflate them, they lose their value, just like money. They begin to mean nothing. Use ‘beautiful’ to describe a sandwich and the word means nothing.

All that really needs to be said is that this is a book worth reading.