I first heard about this book when it was shortlisted for the Man Booker Prize this year, and approached it thinking that it would walk along the lines of other books I’d read that were about family and loss. I was not prepared for the twist that changes everything around page 70. I’ve read that there are those who’ve read the book knowing this twist and those who didn’t (like me), so I will not spoil it here. Just know that the ordinariness of the description does not capture the play of theme and technique that so refreshed this everyday reader’s palate.

The blurb of We Are All Completely Beside Ourselves notes that narrator, Rosemary Cooke, is a young woman who has “wrapped herself in silence: the silence of intentional forgetting, of protective cover”, and it is this theme of silence and memory that Fowler manipulates throughout her novel. 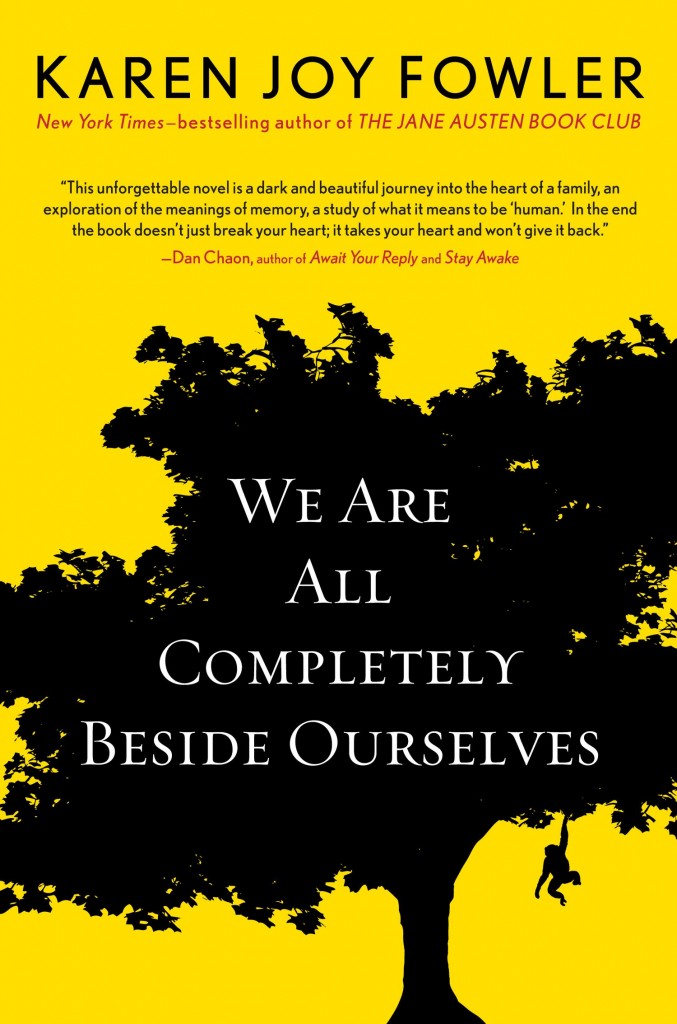 Fowler consistently uses the ideas of silence and memory (specifically, that memory is relative and changeable) in her narratorial technique. Rosemary Cooke is an unreliable narrator, both being confused about the reliability of her own memory and pushing this confusion on the reader by omitting facts and using unconventional structure to reveal the story at the opportune moments.

While I understand that Fowler is using Rosemary’s unreliability as a tool to confront the reader with the idea of unreliable memory, it came across as stunted and lazy to me as a reader. At times, Rosemary would openly say that she had purposely left things out and at one point says ‘I probably should have mentioned that earlier…’, and for me, this was just too forward.

What kept me reading were the characters and the realism of them. Rosemary felt real, with a rich childhood that I could connect to and visualise easily. Her brother, Lowell, and her friend-not-friend Harlow were relateable characters that I enjoyed reading about.

Fowler’s voice sounds authentically young (I was surprised to learn that she is over 60!) and her style is also quite commendable, balancing a casual modern tone with elegant and oftentimes poetic phrasing. Fowler artfully captures the playfulness that Rosemary has carried with her from childhood, in passages such as:

I missed the jars of tadpoles we kept on the porch for scientific observation, the constellations painted onto the ceilings, the map of the world on the library floor, where we could go with our lunches and eat in Australia or Ecuador or Finland” – page 84

We Are All Completely Beside Ourselves addresses heavy themes of morality and our place as humans, as well as the idea of memory and silence, without tipping over into overtly political or preachy territory. The issues she raises are important, no doubt, and the techniques that Fowler uses are interesting and artfully achieved.

But when I finished this novel, I found myself wondering why it had been shortlisted for the Man Booker. It’s a good book and it has its merits in both plot and characters, but it didn’t grab me as a stand-out piece of award-winning (or even shortlisting) literature.

You can read an excerpt of the novel and find out more about the author on Karen Joy Fowler’s website.