Part of the Fremantle Press poetry series, Fremantle Poets 3: Performance Poets features works from twelve of Western Australia’s finest writers. Negotiating between the vibrancy of the spoken word and the stark finality of the printed page is a difficult feat (this is why the book comes with an audio version of the poems). The poems “exist in mediated tension”, editor Scott Patrick-Mitchell says, and “represent what makes the Perth performance poetry scene so exciting and unique”.

One of the poets featured in Performance Poets is Dr John Charles Ryan, born in New Jersey in the US and currently living in Western Australia. His writing draws largely on the relationship of creativity and plant life, a concept called ‘ecopoetics’, which features in this article for Cordite Poetry Review.

Writer’s Edit was lucky enough to chat with John Charles Ryan and learn more about his enlightening sense of poetics and what makes Western Australia such a rich source of inspiration. 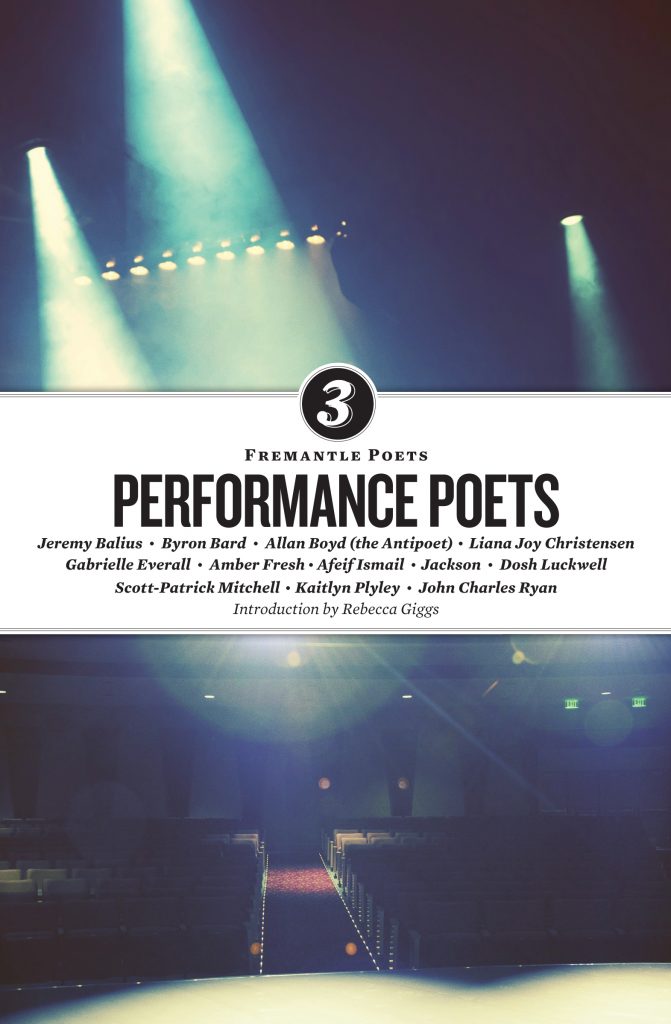 What is ‘ecopoetics’ and how does it feature in your writing for Performance Poets and your poetry more generally?

I recently sat on a boulder beside a waterfall in northern Thailand. My Thai friend offered a handful of our lunch (including sticky rice, of course) to the spirit of the waterfall. I was moved by the ease of her giving, that such an action could be automatic (perhaps autonomic) and, indeed, woven into her thinking and doing. A resident dog came by to skulk for food, but didn’t even sniff the sticky rice. One could say this scenario is overtly about religious beliefs, but to me it signifies a worldview, a value system, a philosophy of nature and place—in other words, an ecopoetics.

I think of ecopoetics as the broad underpinning of ecologically conscious making. Poetry is an act of making—the root being poiesis, from Greek. Ecopoetics is about pattern-making and language-genesis. It is connected to how one perceives the natural world, the philosophical questions one grapples with, the values one develops, and the words one selects for communicating it all.

Should nature be left alone, or should it be put to use? Does a plant have intelligence and consciousness—can it speak and, if so, how do we listen? Is a rock or a water body a living thing? To my mind, these are questions of ecopoetics.

Ecopoetics is the wellspring from which nature poetry percolates (even though I didn’t write about the waterfall, the rock, the dog, the sticky rice, my friend). It also inspires our modes of sensory contact with nature, which then infuses our verbiage. Why should we taste, smell and touch the natural world the flora, fauna and fungi many regard only as visual spectacles, part of the furniture, so to speak?

When we bend down to eat a wild berry or smell the acrid scent of a flower, how is our consciousness transformed? Transformative acts can be simple and unassuming: like sitting near the waterfall or observing the skulking dog.

In my book Being With (2014), I labour the idea of an ecopoetics of everyday life. This idea points to our potential to interact with the patterns of nature on a daily basis and in a positive (i.e. non-destructive or sustainable) way, and to have these patterns within us, in the very fibres of our bodies, in the synapses of our neurons.

Particularly since the 1970s, lots has been said about environmental ethics. Consider debates about animal ethics and, more recently, intense discussions about the impacts of climate change. But what has been said of ecopoetics—an equally crucial influence on our interactions with the non-human world and between members of our own species?

Ecopoetics, indeed, features in my writing for Performance Poets. The poems are the water drawn from the spring. The spring is a confluence of spiritual meanings (‘Orchid Anima’), ecological meanderings (‘Understanding Parrot Bush’), sensory epiphanies (‘Bush Tucker’), historical inflections (‘A Colony of Royal Hakea’), and Indigenous connections (‘Inside a Jarrah Tree’).

I believe plants and their places possess profound intelligence—their genius (or genius loci) is so deep it exceeds our own cognitive capacities. They are smarter than us; we just haven’t been smart enough to realise this.

For me, as a poet, getting close to the elemental intelligentsia of the South-West occurs through different means: through sense contact, sustained interaction with time and the seasons, historical reading, scientific knowledge, talking with local people, observing ordinary events, and participating in cultural gatherings such as wildflower festivals. For me, there is an ideal of liberation at work. Plants have been scientifically over-articulated (and in some respects quarantined) since Carl Linnaeus (1707-1778) devised binomial nomenclature (i.e. genus and species designations). But science is only one lens for elucidating the mysteries of nature. And I use ‘nature’ deliberately: after courting alternative terms for years, all others fail me.

Is there something that draws all the poems in Performance Poets together? Is there a common theme or feeling?

Many of my poems in Performance Poets are altogether focused on South-West plants. The poetry is underpinned by an ecopoetics (or, more specifically, a plant poetics), involving my need to derive meaning in a new (to me) place through its flora. In 2008, I came to Western Australia on a whim and have been here ever since (of course, except for my trip to Thailand alluded to earlier!). The plants have been big-hearted and knowledgeable guides. I do not intend to speak for them or on their behalf, but rather to inculcate my writing with the particular mode of being, their spirit and deep time, and their ‘mindless mastery’, to borrow an affectionate term from plant scientist Anthony Trewavas.

The plant is the cartilage (or should I say pectin) binding together all my poems in Performance Poets. I am interested in telling the many stories of South-West flora.

For example, ‘Sheoak Reverie’ alludes to the myriad interpretations of the plant’s name: she for the sound of the wind through its needles, or in reference to conspicuous differences between male and female trees, or as a balkanisation of an Aboriginal word for an Eastern States species, or a repulsive gendered colonial-era pejorative for the supposed inferior quality of its wood in comparison to the European oak.

Another common theme is multisensory engagement with plants. ‘Sunday Zamia Swagger’ is an attempt to know the zamia palm (Macrozamia riedlei) through walking with my feet, smelling with my nostrils and listening with my tympanum. The poem also alludes to the many stories in circulation during the colonial era about settlers and explorers being neurologically (and digestively) affected after eating untreated zamia fruits (and hence the swagger of the poem). Toxic when eaten in their raw state, the fruits yield an exceptionally nutritious and sustaining flour when leached of their poisons, fermented, dried and ground, as Nyoongar people have been doing for over 50,000 years.

The general feelings I wish to evoke are awe and respect. I believe this is most palpable in the final poem of the series: ‘Inside a Jarrah Tree, a Black Tunnel Reaching Skyward’. Here I imagine the burnt out tree as a body. The awe for the tree and the forces that shaped it into its present form ends abruptly in a note of utter respect: ‘I would not stand here forever’ (for even a figurative forever). It would be too overwhelming to do so. Some places are not meant for lingering.

Writer’s Edit would like to thank Fremantle Press for their support, and John Charles Ryan for his insights and time. To read (and listen to) Ryan’s work, purchase Fremantle Poets 3: Performance Poets.

You can also read our previous interview with Kevin Gillam, featured in Fremantle Poets 2: Two Poets.