Back in January, we announced that our YA fantasy imprint, Talem Press, had signed debut author Bronwyn Eley for the publication of her series, The Relic Trilogy.

Fast-forward more than seven months later, and we’re now only two weeks away from sharing Relic, the first book in Bronwyn’s series, with the world! 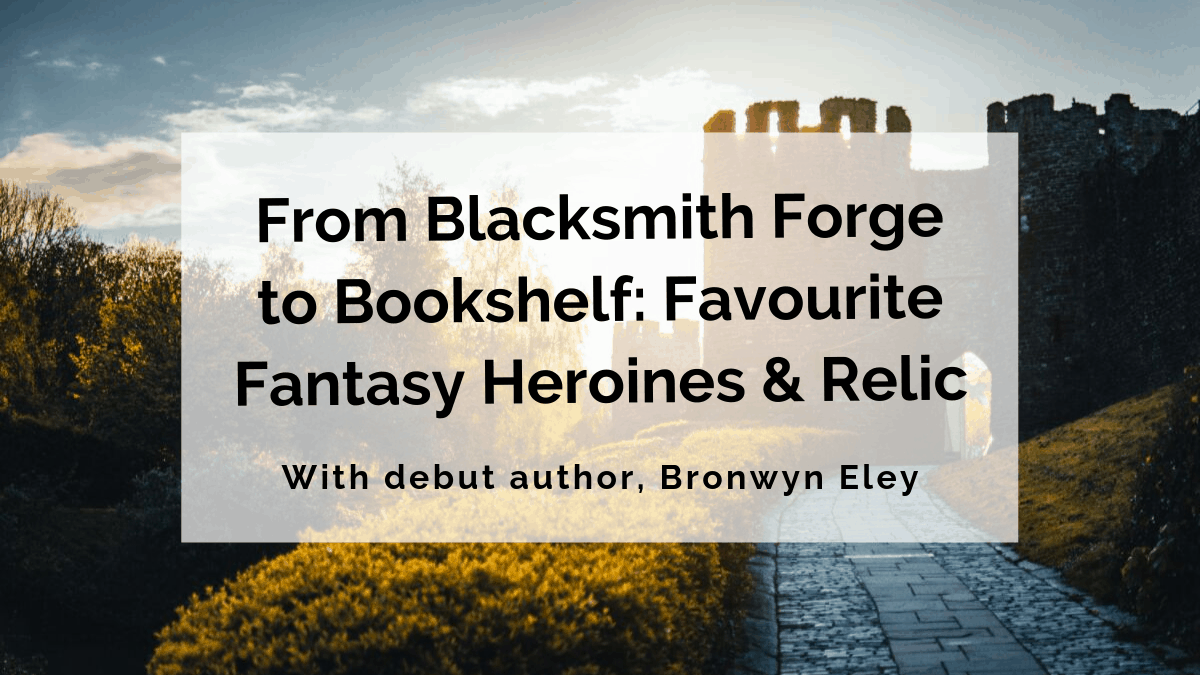 As a quick refresher, here’s the official synopsis and cover for Relic…

In the city of Edriast, there is no deadlier duty than to serve as the Shadow.

As the personal servant of the powerful Lord Rennard, the Shadow’s life is all but forfeit. Rennard possesses one of five rare and dangerous Relics – a jewel that protects his bloodline, but slowly poisons everyone else in its proximity. When the current Shadow succumbs to its magic, nineteen-year-old blacksmith Kaylan is summoned to take his place.

It’s an appointment that will kill her.

As the time Kaylan has left ebbs away, hope begins to fade… That is, until she discovers a plot to destroy all five bloodlines in possession of the Relics.

A rebel force plans to put an end to Rennard’s rule and Kaylan suddenly finds herself embroiled in a cause that might just be worth fighting for. But no cause is without its costs…

As her life hangs in the balance and rebellion bears down on Edriast, Kaylan must decide where her loyalties lie – and how she’ll leave her mark on the world.

Relic is the absorbing first novel in The Relic Trilogy, a thrillingly dark YA fantasy series. 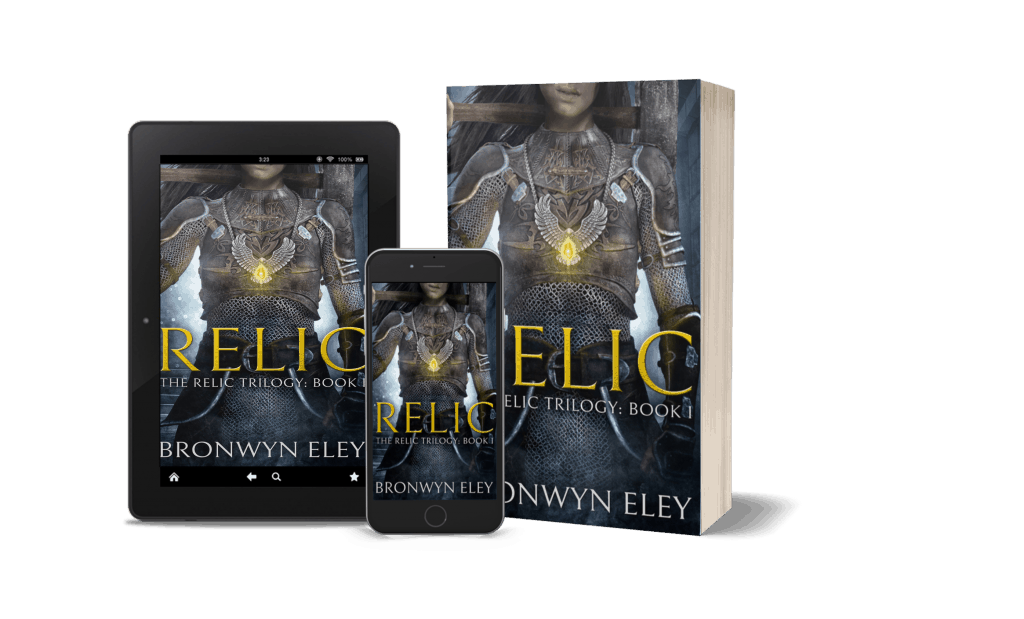 Ahead of Relic‘s release on September 12th, we sat down to chat with Bronwyn about her writing process, her book research, and her publishing journey so far.

Do you remember when you first had the idea for your debut novel, Relic?

Can you tell us a little about the writing and rewriting process for this book?

I have a pretty good flow once I get going. The first draft was a mere 82,000 words and I wrote it in 82 days. I then spent the next year or so rewriting parts and trying to make it better. Only then did I start sending it out to agents and publishers.

Once Talem Press took me on, I found my rewriting process became a lot more regular – which makes sense. Being on deadline has been very motivating and exciting. When I write, I just go for it. I plan a few bits and pieces but mostly I just let the story go where it wants. Sometimes the characters surprise me. More than a few times I’ve found myself going ‘Kaylan… dayyyyyum, girl!’ because they do have a mind of their own, I swear!

The next step is to go back and add in the bits that I missed (there is always something).

After Relic had been submitted and I got my edits back from my editor to start the rewriting process, I knew I had to have a more structured approach to the rewrites. I looked at the list of suggested changes and broke them down into easy, medium and hard – depending on the level of work involved. I started with the small things and worked my way up! I find it works quite well for me.

Where do you stand on the famous plotter/pantser divide? Or are you somewhere in the middle?

I’m more of a pantser, overall. At least, I was when I wrote Relic and book two in the series. Now that I’m approaching book three – and I’m looking at all these subplots that need to be addressed – I’m thinking I’ll have to do a bit more plotting to make sure it ties off nicely.

I like to plot the big things, but I don’t want to know where I’m going every second of every minute when I’m writing. I want to be surprised as well! As I said before, my characters often write their own scenes and sentences – it really does feel like they’re alive in some distant land, and I’m merely the conduit that is frantically trying to type the words onto her laptop as those words come flooding in like I’m having a really, really, really long-distance telephone call with a friend.

How did you go about creating your main character, Kaylan, and putting yourself in her mindset?

I don’t remember much about the early days when this story came to me, but I remember thinking one thing about Kaylan: strong. She came to me nearly fully formed as a young woman who is both closed off and loving, both passionate and fearful, both strong and weak.

The decision for her to be a blacksmith was very deliberate for many reasons. Firstly, I wanted her to be not just emotionally strong but physically, too. I am the kind of person who really takes pride in her fitness and physical strength and I wanted Kaylan to be the same. Secondly, she needed to be physically fit so that her slow degradation (as the Relic poisons her) would be evident on her body. Lastly, I wanted to be able to write passionately about what she did. I often daydream about being sent back in time to medieval times and I always say that I would be a blacksmith, if I could.

To put myself in her head, I do a few things. She suffers a lot, and where I can, I tap into my own emotions. I think about the pain I’ve experienced – or the happiness or the fear – and try to imagine how I would react if I was in her shoes. I’ve also done a lot of research for those things that I just can’t relate to.

In terms of her blacksmithing, I actually did a blacksmith course one weekend. By this point, I had done a lot of internet research and watched lots of videos on the subject but I knew I had to experience it for myself. It’s one of the best choices I’ve made. Not only was it incredibly fun, but I feel so much closer to Kaylan because I can hear the metal and feel the fire so acutely now, and it’s much easier to step into her shoes.

Who are some of your favourite fantasy heroines, and did they inspire you when creating the women of Relic?

A huge influence of mine is the American author Maria V. Snyder. Her book Poison Study was one of the first YA fantasy books I read and fell utterly head-over-heels in love with. Her protagonist Yelena has stuck with me after all these years. It’s safe to say that Yelena is definitely part of the mould that makes up Kaylan.

There is a book series called The Sword of Truth by Terry Goodkind, and a TV show based on it called Legend of the Seeker. I admit I’ve never read the books, because I started the show before I knew it was a book series! It’s on the TBR list. There is a woman in that world called Kahlan, and she is definitely a huge inspiration for my Kaylan – not just in the name. She is so commanding and passionate. I adore her. I even cosplay as her. It’s safe to say I’m obsessed.

Leigh Bardugo is another author who knows how to write a kick-ass female. If you haven’t checked out her Six of Crows duology, you are missing out! I read this after writing Relic, but Bardugo’s work has taught me new things and shown me new ways of writing relatable and devastatingly human women.

Relic and its characters go to some pretty dark places throughout the story. What do you do to brighten your day after writing a particularly dark or difficult scene?

This might sound strange, but writing dark scenes doesn’t bog me down… at least, it hasn’t yet! Even if I’m tapping into something personal – which is common for writers – I find I’m able to disengage the world of Relic from my real world quite easily.

In saying that, if I’m ever bogged down (whether it be a difficult writing session or not), I find watching TV usually cheers me up. I put on something light and fun, like Friends or Gilmore Girls – something I’ve seen a thousand times before and so is very familiar and comforting.

What has your experience as a debut author been like so far?

A whirlwind! The world of books and publishing is very familiar to me. I spend my days talking with authors – some bestsellers, others debut. This has given me incredible insight into the process and into authors I’ve admired for years. Yet none of it really prepared me for the onset of excitement and fear, and that feeling like you’ve taken the handbrake off at the top of a hill.

It’s really been a great experience. My publisher and editor are incredibly intelligent and kind women, who are very generous with their time and patiently answer all my questions.

Having complete strangers follow me on social, read my book, say they’re excited to read my book… Seeing that investment from them – and that hope – is mind-boggling. I’m not sure I’ll ever get used to it.

What are you most excited about as you move into the next phase of your author journey?

As I write this, Relic is still pre-publication. So I guess what I’m most looking forward to is Relic being out there in the world – for anyone and (hopefully) everyone to read! I’m excited to actually be a published author.

Also, while I love The Relic Trilogy, I’ve already started making notes for a few other story ideas and I can’t wait to start on those too.

Don’t forget to add Relic on Goodreads here! And get ready to meet Kaylan and discover the devastating power of the Relic on September 12th.

For more info on Bronwyn, her books and her writing adventures, head over to her website.