Good Ghost Bill, aka. Bill Moran, is a spoken word poet from Austin, Texas. Having won numerous championships in the USA, he’s now on tour in Australia, sharing his talent and running workshops with aspiring slam poets. Writer’s Edit was lucky enough to speak to Bill before his event at Enough Said in Wollongong. 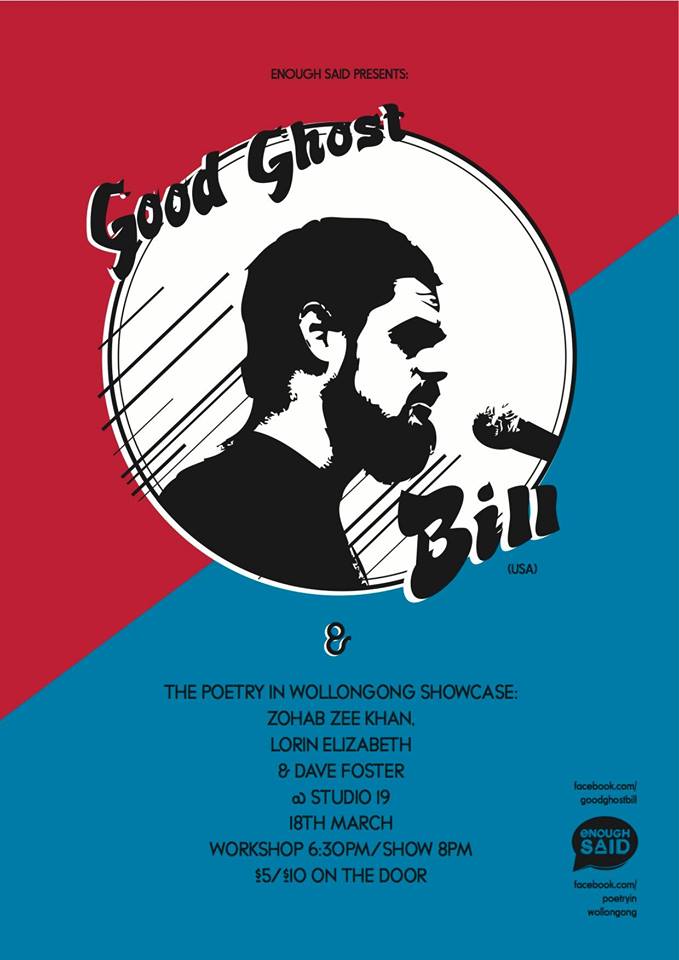 Tell us how you first learned about spoken word poetry and how you got into it.

I was an undergraduate student at Texas A&M University when I came across spoken word/slam poetry. I had written a little poetry here and there, but didn’t really dive into it until I was first introduced to the work of poet/musician/actor Saul Williams, specifically his album Amethyst Rock Star. This album is a mix of poetry and hip hop that blends surreal imagery with strong performance in a way that appealed to my overactive imagination (check out an example here). It really served to shatter my preconceived notions of what poetry was ‘supposed to’ look like. It introduced me to the breadth of spoken word poetry as a medium, what was possible with it, and how important it really is.I knew immediately that I wanted to command a room and an audience’s imagination like Saul does. So after a year or so of writing, and my first dose of good ol’ fashioned heartbreak, I stepped on stage for the first time – and feel like I haven’t stepped off it since.

Have you got any common themes throughout your work? 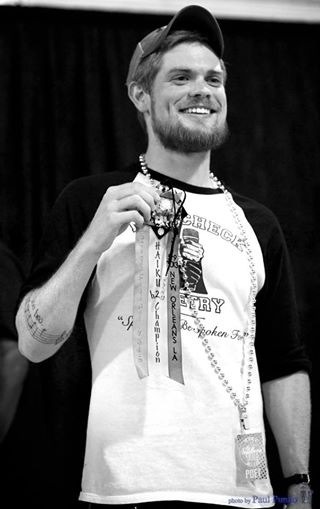 Thematically, my work varies based on where I am in life and where I am trying to go. A signifying characteristic of my work is a thorough use of imagery – surreal, and as metaphor.  I have always been much more interested in showing my reader what I’m saying through image-heavy language, rather than simply talking about it. Now, the images themselves tend to vary. Some are surreal, some are more simple and elegant, but mostly they come in thematic waves from year to year. Lately I’ve been using a lot of food/eating imagery: consuming and being consumed, especially in reference to ideas. Maybe it’s because I like the physicality it brings to my work, but honestly, I’m probably just writing on an empty stomach.

Talk us through your writing process, from what inspires you to the end result…

My writing process is a little bit chaotic. I never actually begin with an idea or argument that I want to present. It always begins with a series of images, real or imagined, that I weave together into a coherent body. I’ll dream up interesting things for the audience to see, put them all on paper, and then ask myself – what is the common thread? What are these images communicating as a whole. Usually there is an foundational idea that belies each image, and whenever I can pick that out, I make that the centre of the piece and edit around it. I usually find ‘the poem’ in a single line or two, and keep the images and lines that contribute to that idea. Usually, this amounts to a lot of raw material on the page, and then a tedious process of chipping away the parts that don’t belong.

You’ve won numerous championships in the US, but what would you say has been the high point of your career so far?

This tour is probably the highlight of my career thus far. It’s truly a humbling experience to arrive on the other side of the world and realise: “My words brought me here.” Really: if it wasn’t for my writing, I probably wouldn’t have ever seen Australia or met the wonderful people I have been introduced to thus far. There is no greater evidence of the power of spoken word, the individual voice, and the amazing writing community that selflessly supports new, eager writers. I can’t say how grateful I am to be here, and I already find myself growing more content/confident as a person and a writer.

As a close second choice: I would also choose the US tour I went on last May. I’d choose it for the above reasons, plus I was able to experience it with some of best friends. I didn’t think we could become better friends than we were before the trip, but I was pleasantly surprised.

The idea was first planted in my head a couple years ago when I met and hung out with Luka Lesson during his journey through Texas. He introduced me to Australia’s amazing writing community and urged me to travel and tour the country with my work. I couldn’t justify the trip financially, but always carried the idea in the back of my mind. A couple years later, I received an email from Adam Davy, the head of English at a state college in Brisbane, asking me for the text of one of my poems which he had been introduced to. He intended to teach my work in his classroom, and I was happy to start a line of communication with him that would eventually lead me to inquire about a possible tour. What happened next was unbelievable and wonderful: through his contacts and the hospitality of poets in Australia, Mr Davy spread the word about my work and interest in touring to all of his poet friends, who then continued to broadcast it to other venues – and before I knew it, I had handfuls of people emailing me asking for a feature. I can’t properly explain how validating and humbling that was. It’s all thanks to Luka, Adam, Simon Kindt, and several others who kickstarted my work and convinced me that Australia wants to hear my voice. I am very much indebted to these individuals.

After the tour, what’s next on the Good Ghost Bill agenda?

When I return to Texas, I have a few days to relax, and then it’s off to the second leg of this tour in Chicago, New York, and Austin! I’ll have a month free after that to work with a poetry team in my hometown as they prepare to perform for an upcoming festival in Houston, and then another short two week tour  along America’s west coast, and then I’ll probably start to graduate school to study Creative Writing in August. Bottom line: 2014 will be very busy! Especially since I’ll have responsibilities to take care of for my non-profit organisation in the meantime (a LOT of emails to answer haha).

Good Ghost Bill will be performing at Studio 19, Wollongong on the 18th of March, 2014 – you can buy tickets at the door. If you want to follow Bill’s journey, you can follow him on Facebook here or Twitter, here.

Writer’s Edit would like to thank Good Ghost Bill for taking the time to speak with us.

Looking forward to your performance at Enough Said, Bill!