The English language is a complex thing, and sometimes it feels like it was made to trick people. This is the case when it comes to the difference between leaped and leapt.

Both of these words mean the same thing. Sometimes this can happen: two words that are spelled and pronounced differently, and yet are essentially the same word.

So, how do you choose which version to use?

What do leaped and leapt mean?

Let’s start with the basics. What do these words mean?

Both leaped and leapt are the past tense, and also past-participial forms of the verb leap, meaning to jump or quickly move from one place to another, whether literally or figuratively.

At face value, the only difference is the spelling and pronunciation.

Leaped is pronounced as leep’d and rhymes with words like creeped, beeped and heaped.

Leapt is pronounced as lep’t and rhymes with words like crept, wept and slept.

Notice that in the examples above there is another example of two words meaning the same thing.

Crept and creeped can also mean the same thing; they are the past tense of the word creep. But just as creep comes with more than one definition, so does the word creeped.

For example, you can say:

He creeped me out.

But you can’t say:

He crept me out.

Leaped and leapt doesn’t have this kind of difference. The two words are interchangeable, as they have the exact same meaning.

The verb is frequently followed by prepositions such as up, upon, down, from, to, into, on, onto, off, at, out of, over, and toward.

Let’s look at some examples of leapt being used:

Tim, ignoring the voice in his head, leapt to the woman’s aid.

The cat leapt up onto the table, knocking over a glass of water.

After viewing the evidence, my mind leapt to a horrifying conclusion.

And from the Financial Reporter (UK):

Now let’s look and compare to some examples of leaped being used:

Marge leaped to his defence; he had been with her at that hour.

The officer leaped over the fence, keeping the suspect in sight.

She leaped from the couch and ran to the front door.

And from USA Today:

The number of passports Americans held leaped to 21.4 million in 2017, the most ever recorded…

What is the difference?

As these two words are interchangeable and hold the same definition, the only difference is where they are more commonly used.

Since the 18th century, leaped has been the preferred version within publications that favour American spelling conventions.

Leapt is more commonly found in publications that use UK/Australian spelling, though this has only been the case since the turn of the 20th century.

Though leapt is the more popular option, leaped isn’t far behind it, as seen in the chart below, which shows the use of both words in British publications from 1800–2000:

As you can see, around the 1900s, leapt took majority over leaped, and though they remained close in use, leaped never retook its height.

In comparison, here is a chart showing usage of leaped and leapt in American publications from 1800–2000: 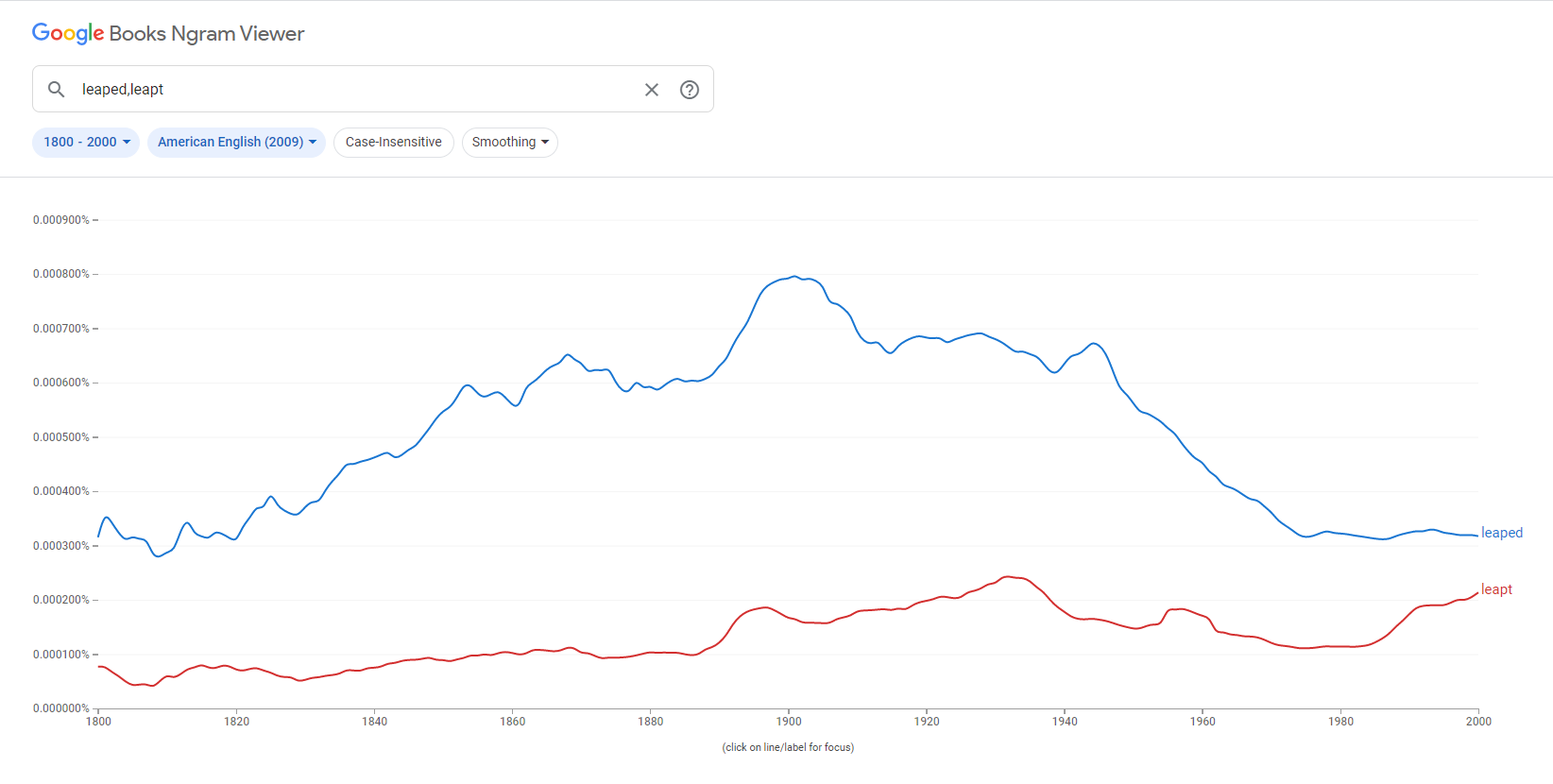 In this case, leaped has always been the main variant used. In recent years, the two words have drawn a lot closer, but there is no evidence to say that leapt will ever take over in the American context.

How do you pick one?

Use the above knowledge to decide which version you should use. Here are some tips if you’re unsure:

I personally like the sound of leapt more than leaped, as the latter just doesn’t sound right to me (probably because I’m British). So I would more likely use leapt in my writing – but it really is up to you.

In case you’d rather just use a different word, here are a few synonyms that you can use instead:

A common error when writing leapt is spelling it as lept.

This is possibly because it’s how other such words are spelt (slept, wept, kept), because it’s how leapt is pronounced, or because that was the spelling back in the 16th century before the standardisation of the English language.

So, there it is! Leaped vs. leapt. It seems more difficult than it is, but hopefully, now you can be fully confident in whichever you choose and remember that neither is incorrect.

It’s all about consistency and common sense. Whichever version you go with, be sure it makes sense for your piece of writing, and that it’s used consistently throughout.