One debate that’s been dividing the reading community for the last few years is the question of whether listening to an audiobook counts as reading.

There has been an abundance of new technologies infiltrating the publishing industry in recent times, and with these technologies have come controversy and debate surrounding their impact on the way we read. 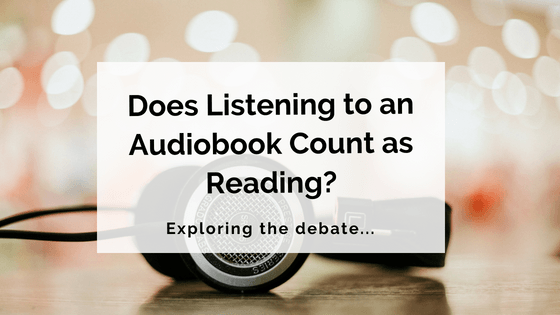 So is listening to an audiobook the same as reading from the page? We explore the arguments and discussions surrounding the subject…

Recent estimates suggest that audiobooks are a two billion dollar industry, and growing every year.

A sales comparison carried out by the Audio Publishers Association in 2014 showed that almost double the amount of audiobooks were sold in the first half of 2014 compared with the same period in the previous year.

In addition to this, the industry has reached the point where books are being written specifically for the audio format.

Given the size and reach of audiobooks, it’s no wonder the question of their reading legitimacy has become a hot topic.

According to the Macquarie dictionary, the act of reading occurs when you “observe, and apprehend the meaning of (something written, printed etc)”.

So, where does this leave audiobooks?

If you listened to Jane Eyre, are you not allowed to claim to have read it? And should you be ashamed of the way you consumed it?

The extreme audiobook detractors believe the answer to the last question is an emphatic yes.

In these camps, listening to audiobooks has been described as anything from lazy to outright cheating.

As Psychology Professor, William Irwin, said in his article Reading Audio Books, “Audio books began as a boon to the blind and dyslexic and have been mistaken as a refuge for the illiterate and lazy.”

The voices of the other side, however, claim that the method of consumption has little or no relevance – the words are the same no matter how they are being delivered.

The arguments from both sides of the debate range from the scientific to the subjective; the only similarity is the passion behind their beliefs.

While there is not a great deal of scientific research into this specific issue, there are a few relevant studies that present cases for both sides.

As far back as 1977, a study was conducted at the University of Chicago, in which participants were asked to write a brief summary of a story after either listening to it or reading it.

The content of the summaries produced by the participants were extremely similar, suggesting that the processes involved in reading and listening, as well as the end results from these activities, were very similar.

The authors stated that, on the basis of their findings, “reading and listening involve identical comprehension skills”.

In contrast, in 2013, psychologists at The University of Waterloo, Ontario conducted experiments into mind wandering, interest and memory when reading silently, reading aloud and listening.

Using excepts from Bill Bryson’s A Short History of Nearly Everything, participants read one section aloud, read another section silently and listened to a third section while looking at a blank screen.

The results showed that when listening, the participants’ minds wandered the most, and they remembered the least.

The authors also noted that “while listening to an audiobook or podcast may seem to be a convenient and appealing option, our findings suggest that it might be the least beneficial to learning, leading to both higher rates of mind wandering and less interest in the material.”

It’s possible that this study even underplays the mind-wandering aspect of audiobooks, seeing as it would be rare for someone to be staring at a blank screen when listening to a book.

The majority of people listen to audiobooks while doing other things, such as driving, exercising or cleaning. This kind of multi-tasking is almost impossible when reading a physical book, and is one of the most common arguments against audiobooks.

While there is science to back up both sides of the argument, the real debate is raging in the reading trenches: blogs, book clubs and other such reading communities, and these arguments are made up of a great deal of personal and subjective opinions.

One of the main arguments against audiobooks as a legitimate form of reading is that by having someone else read you the book, you may be influenced or guided into certain assumptions based on their tone or expression.

In other words, the narrator interprets the text and passes these impressions onto the reader, thus excluding the reader from ever needing to form their own impressions.

While this definitely takes away an important element of the reading process, in some cases, this may actually enhance the reader’s enjoyment and understanding.

(Personally, I would have loved this when I was reading The Sound and The Fury – maybe then I would have understood what on earth was going on.)

As mentioned previously, another significant issue that gets raised is the fact that people find it hard to focus when they are listening to a book – they feel they are much more easily distracted than they would be if they were reading a physical book.

While this is a legitimate concern, it isn’t a valid argument in the current debate. People’s personal preferences and/or abilities are just that, they’re personal, and are not legitimate reasons to exclude an entire method from the reading umbrella.

The most obvious argument in favour of audiobooks’ legitimacy is that the content is exactly the same regardless of whether the words are being listened to or read.

A listener experiences the same story as a reader, they should be just as able to contribute to a discussion about the book, and have as much of a legitimate claim to having read it.

To say that listening to a book means you haven’t read it, excludes all visually impaired people from being able to call themselves a reader, which seems extremely unfair.

Reading is, at its heart, an inclusive activity and community – to exclude such a large population for what is essentially semantics seems a little out of character.

This is not to say that audiobooks are for everyone, in the same way that e-readers aren’t for everyone.

But the fact that the method doesn’t suit everyone’s reading style shouldn’t exclude it from the reading family.

We all accept the fact that everyone is different; there’s no reason why this fact should be any less accepted when it comes to the way we choose to read.

While the processes of listening and reading are different, the end results are similar enough; listeners should neither feel ashamed nor defensive about their method.

As I see it, we have two options – either we accept that technologies are changing the way we read and expand the definition of reading to fit the times, or we create a new word that encompasses all forms of literature consumption.

Either way, carry on reading, listeners.

Click here to learn more about the reading process!