Alternate Point of View (POV) is a complicated narration form, but, if done the right way, it can make for a captivating read.

This technique combines the depth of a single character’s perspective with the versatility of switching between characters. You can alternate between two characters, or several – but the more you use, the more work you will need to do.

This narration form is paired with either first person POV or limited third person POV. Most commonly, first person alternate POV switches between two characters, but there is nothing stopping you adding more if you can handle it. 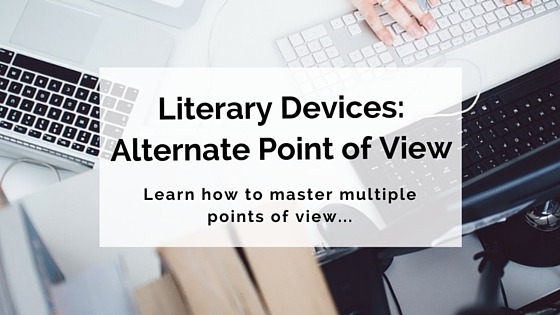 I wanted the reader to know each character’s true thoughts about what was going on, while at the same time, reveal which lies they kept to themselves.”– Kym Brunner

You may have heard alternate POV referred to as switching POV, dual POV or multiple POV. ‘POV’ is also sometimes interchanged with ‘perspective’.

Let’s dive into what it all means and how you can use this technique.

When should I use alternate POV narration?

First things first, get familiar with the literary technique.

Next, a good way of deciding when to use alternate POV is this: if the story doesn’t need it, stick to single perspective.

Alternate POV is still uncommon enough to distract your reader a little, and some find it frustrating. To avoid this, you want to make sure your story really needs it, and that you do it really well.

This form of narration is all about contrast. The contrast could be in personality, culture or ideology. Whatever the reason, make sure it’s key to the story. If your narrative doesn’t gain anything from each new perspective, cut it back to just one.

Alternate POV is more common in some genres than others. For example, it’s a popular choice in both YA fiction and romance.

This method allows readers to enjoy getting to know both the hero and heroine intimately by seeing their relationship through both characters’ thoughts.”—Gail Gaymer Martin

It’s important to spend a little time thinking about the market and how you’d pitch your alternate POV story, even in the early stages of writing.

If you’re thinking about alternate POV for its practical use of access to different action or location points, it’s worth doing some serious work on the perspectives to make them really pop. This isn’t a narration form that blends in the background; it stands out. So you may as well make the best of its features.

Switching POV within a series

If you’re writing a series, alternate POV can be useful to change things up and sustain interest throughout multiple books.

It’s okay to shake up your pattern a bit with each book. Some series add a new character’s perspective to the mix in the second or third novel as they become more relevant to the plot. Other authors start a series as single-person perspective, and end it alternating between two or more.

As always, you must keep the story’s best interests in mind.

How to use alternate POV effectively

As we mentioned above, managing alternate POV can be a complicated task. When writing, there are some important considerations to keep in mind to ensure you’re using this technique as effectively as possible.

Here are a few must-dos:

Particularly when using first person POV, you want your characters to have clear, distinct voices. This is probably the most important factor of alternate POV, and is a common criticism of stories using this form.

The same way dialogue is tailored to each character, so should their introspection and description of the outside world.

What’s the point of telling a story from multiple perspectives if the voices aren’t different?”—S. E. Sinkhorn

In alternate POV, character voices drive the story. Make sure your characters don’t just have strong voices, but memorable ones. Giving each character a distinctly different perspective is important to add something unique to the story and help the reader identify who they’re following.

Establish a pattern for your changing POVs

Ideally you’ll want to keep to a pattern, such character A, then B, then A, then B and so on. Breaking out of a pattern will jar the reader. Sometimes, of course, that’s what you want. The end of Allegiant by Veronica Roth does this particularly well.

Even more important than having a pattern is deciding what POV provides the best tension for each particular moment in the story.

If you find that some chapters are just filling space so you can keep up a pattern, you might want to consider no pattern at all. Repeating the same scene in a different character’s perspective is highly unusual and not recommended, so you need to get it right the first time.

I ask myself, ‘Who has the most to lose in this situation?’ This question usually makes the best POV character obvious.”—Lisa Walker England

It’s all about reader expectations. If your story starts alternating POV in a set pattern, stick to it. But if there is no clear pattern from the start, you’ll have more freedom to choose who each scene is told through.

Outline your story well before writing

The golden tool for working out your story pattern is doing up an outline. Not only do you need to have clear plots, character arcs and climaxes for each perspective, they need to parallel each other.

Looking at the story as a whole, you should see what character perspective pattern works the most naturally with your story – if you need a pattern at all.

Always have a cue when you switch character perspectives, such as the start of a chapter, scene or line break.

The last thing you want is for the reader to be confused about whose head she’s in. So make sure you give clues right away with setting and internal dialogue before you jump in.”— Lisa Gail Green

Don’t switch too often. The minimum length to keep the same perspective is one scene. However, if your scenes are short, and you change with each scene, this can be taxing on the reader.

For stories in first person POV, switches should occur only with chapter breaks, and generally each chapter is titled after the perspective character.

When writing in third person POV, it’s good to use the perspective character’s name as soon as possible after the change.

Whether you’re writing in first or third person, make sure to go straight to the character whenever you make a switch. Scenery description can happen in a couple of sentences. Grounding the reader is your biggest priority.

As with any choice you make with your story, each technique has pros and cons. Here are three big pros to consider when thinking about using alternate POV.

Alternate POV offers a combination of depth and flexibility that is hard to find in any other form.

The plot is progressing in two or more places at once? Just switch over to the other character. You need someone to push the big red button to advance the plot, but your lead character needs to be struggling with self-doubt? You can still take your readers through the thrill of the moment inside another character’s head.

2. It can help create tension

Tension is important in any story, and alternate POV has a couple of handy features that make it a little easier. Complicating a situation is one technique that can increase tension. Having different perspectives, with different opinions and worldviews all looking at the same thing, can really ramp things up.

You don’t want your readers bored, and this POV lets you shift heads and keep the reader on their toes.”—Mac Hopkins

You’re not in the one character’s head all the time. That means the reader will miss bits. And you, as the author, can deliberately conceal parts of the story or character to be revealed when you want; the tension of revealing information can be brought out whenever it suits.

3. It gives you control over pacing

With alternate POV, you have full control over your story’s pacing. The simple techniques of shortening the space between each switch can increase the pace.

As with any choice regarding literary techniques, there are also a number of cons to using alternate POV. Here are three of the main disadvantages and difficulties…

A challenge with alternate POV is the amount of foundational character development you need to get started.

A single POV means you dig deep in one character. A broader POV, such as omniscient, means you can work just with characters’ external mannerisms. But in alternate POV, you need to be an expert on any and all characters you alternate between.

More POV characters means the reader has less of a connection to any one character. It’s a price that must be paid.”—Glen C. Strathy

In many ways, your characters will make or break your story. Of course, you need to pay close attention to plot and all other literary features. But your reader needs to know your perspective characters, and fall in love with them – all of them. In the same space you would use for a single POV story.

2. It can be hard to keep track of things

Just as complication can add tension, if you can’t harness the spirals of thoughts and plots, it can be a struggle to pull together a cohesive story. Alternate POV will be very difficult for anyone who isn’t used to planning, scheduling and keeping track of everything.

It’s easy to lose focus, which can lead to character voices sounding too similar, characters with incomplete arcs, or unbalanced tension across the perspective characters.

3. There’s a risk of head-hopping

Head-hopping is an easy mistake for new writers when using third person alternate POV. Head-hopping refers to changing the perspective character within a scene. If you’re alternating with chapters, it also includes accidentally changing perspective within a chapter.

When the narrator switches from one character’s thoughts to another’s too quickly, it jars the reader and breaks the intimacy with the scene’s main character.”—Joe Bunting

Mastering the switch point between perspectives is important; it will help you avoid the mistake of head-hopping when you intentionally want to switch.

You’re less likely to unintentionally slip if you focus well on the perspective character. Having clear, distinct characters will help you stay in one head.

Alternate/multiple POV has been around for a long time, but has become more common over the last several years. Reading is one of the best ways to become familiar with a writing technique or form.

Below is a list of novels with alternate POV for you to start cultivating your reading list with:

Alternate POV is an advanced and specialised literary device. But if your story calls for it, and you have a flair for character voices and planning, it can really make for a gripping novel.

Kyla Jo Magin is a graduate of QUT’s Creative & Professional Writing and UQ’s Writing, Editing & Publishing. At the astute age of 11, she announced her ambition to work in the publishing industry and hasn't looked back since. She’s since worked with a range of fiction and non-fiction projects, both with a publishing house and as a freelancer. Aside from books, she loves art, cats, tea and chilly mornings. You can learn more about Kyla Jo at empathyediting.com.au