In this feature, I ask four writers about where they conduct their business of writing: author, journalist and editor of Verandah Magazine Candida Baker; author of 15 books Robert Drewe; freelance writer and author Allison Tait; and television producer, writer and journalist Pascal Adolphe. 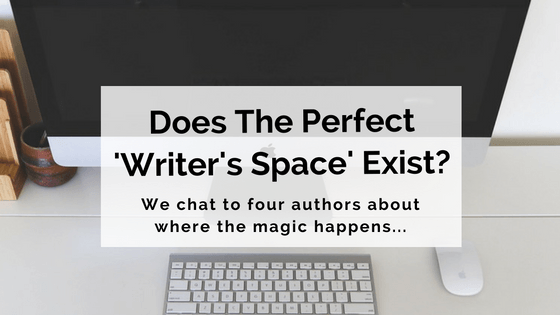 How important is where you write?

Candida Baker says that after writing for so many years, where she writes is not as important as when she writes...

I can pretty much write anywhere, but when I like to write is very early in the morning, as early as 4am, when the world is quiet, and the universe is fresh and new again."

Candida uses meditation to guide her before and during these productive hours of her day. A cup of Lady Grey tea is never far away and her sofa is her office in the wee hours.

Robert Drewe admits that ‘the worst place on earth to write is next to a house with a constantly barking dog’.

His prerequisites are a place that is quiet and has natural light, with a desk and a chair and a power outlet for his computer. He sometimes writes in longhand first when the environment dictates it.

Allison Tait’s perspective has changed from a few years ago, now that her two small boys have grown. She admits to ‘wedging in words where I could’ and writing anywhere back then. She fantasises about being a writer who sits in cafes but says, 'the truth is I get distracted. I need the quiet and the reminder that writing is work’.

She adds that the purpose of sitting at a desk also means work for her.

The physical environment and surroundings are largely immaterial to me as a writer. More important is the internal environment: that is, how I’m feeling. If I’m having a good day, I’m totally focused on the story and oblivious to my surroundings. In fact, I find that if you are in a place that’s romantically considered as the ideal place to write – such as a cottage by the sea or one with a view over some wondrous scene – it can be a distraction rather than an inspiration."

Robert concurs: 'You’re there to work. It’s not a holiday.'

What do you feel are the necessary components for a happy writing environment?

All four writers have had their share of chaotic newsrooms early on in their careers. Allison recalls ‘a fair bit of shrieking’ during her 14 years working in open-plan magazine offices.

It taught me great focus and how to work 'inside my head', which is to say that the entire outside environment fades away when I write. This has been particularly helpful as a freelance writer working around my children whilst trying to write fiction in any spare time available."

These days Robert needs to have minimal interruptions and distractions. He also adds: ‘it’s a great help to have a partner who is sympathetic to these conditions and doesn’t feel threatened by your absorption in your writing, especially towards the end of a book’.

Pascal and Candida find that when there is a deadline they are happy writing anywhere. Pascal adds that writing under pressure in a busy, noisy environment is the most creatively fertile place for him. When Candida is not under pressure to deliver she can ‘get a bit prima donna-ish and decide I need absolute quiet’.

Allison tends to write into quite late in the night. 'As long as the lights are on, the room is quiet and I have my computer in front of me, I’m good to go.' She has a messy desk and her walls are covered with her sons’ drawings.

Where have you written your best work?

‘I haven’t yet written my best work’ claims Candida. She continues,

At least I hope I haven’t! But I hope that the novel I’m working on will be my best work, and that is my early-morning-on-the-sofa novel. Every now and then I experience complete aloneness and quietude, and the work that comes from that is some of my best, I believe."

Pascal also thinks his best work is ahead of him in the shape of the novel he is writing. To date his best work as a paid professional are his television scripts, particularly for The New Inventors, created in a busy office environment and ‘on the road’ – in hotel rooms or on planes.

I have written in so many assorted places I can barely recall them," says Robert. "In the city, when I began writing, I wrote The Savage Crows on an Olivetti portable on the kitchen table at night. And now, in the country, I write on a MacBook Air in a converted garage."

Allison has a ‘Pavlovian response to putting my fingers on my keyboard when I am at my desk, and that’s where I do my best work. I don’t need a view because all I am looking at is the screen. When I wrote The Mapmaker Chronicles, I spent hours and hours looking at the wall in my study – but in my head there was a full-colour movie playing out.’

Did the writing environment influence the creation of your best work and why?

Candida now lives far away from the chaos of capital cities and their newsrooms – in the hills behind Byron Bay in northern NSW. ‘I’m surrounded by massive fig trees, and the emerald grass is luminescent underneath the dark olive green of the macadamia trees. The green soothes my soul. Living in the country definitely informs my writing in the way that I see landscape and how I can meditate myself into the universe around me.'

Robert doesn’t think the environment affects the writing per se, as long as the conditions suit the individual. ‘You don’t need a sea view, for example, to write about the ocean. I think the imagination even works better when the writing environment is far from your fictional backdrop.'

Allison spent six weeks drafting each of the three books in The Mapmaker Chronicles. She thinks that because she has an established routine and just ‘got down to work’, the environment she created informed the speed and productivity of her writing.

There’s no perfect place, except in front of your computer or notebook or whatever your writing tool of choice may be. I think people place too much emphasis on looking for the perfect place to write their novel. I often hear them saying things like 'when I move to the country, I’ll write my novel, or as soon as I get a study of my own, I’ll write my novel'."

Pascal’s ‘light bulb’ moments can happen anytime. ‘Ideas for my writing sometimes are formed in that moment when I’m emerging from a deep sleep, thinking about a story.' Such as when he got the idea for his latest challenge: writing his first novel, a political farce based on his experience growing up in Mauritius.

As my selected panel has indicated, the perfect writing environment is actually in our heads.

We carry it around with us. To get to that place of creativity we just need to focus on the task at hand, get down to the job of writing.

Admitting that it is a job, that it is a ‘hard slog’ and that there is no way around this fact is the most pragmatic approach to productivity. As is establishing a routine. There is nothing romantic about the job of writing!

Deep within us writers there is an insatiable need to tell our story, to get the words down. Perhaps that novel, article or poem would never be written if we thought about the effort too much.

It’s the deep satisfaction of the creative process – of building something and then letting it go, starting anew – which drives us.

Zita has always wanted to be a writer and has kept a journal since the age of 11. She left school early to become an apprentice chef before her father found out about her poor exam results. Cooking led to many adventures worth writing about, such as meeting Elton John and catering for an intimate wedding on the Hawkesbury River with no vehicle access or electricity. Now Zita is out of the kitchen and in front of the computer, doing what she was destined to do. Follow Zita on Twitter and read her blog here.

link to 5 Tips For Finishing Your Novel As A Full-Time Parent
Parenthood. It's a full-time job. Often one we have to fit around another full-time job in order to pay the bills and eat. The same can be said for aspiring writers who have to make time for their passion in the hours not consumed by paid employment and sleep. Finding the time to write is […]
Continue Reading
link to 5 Must-Have Tools To Get You Through The Editing Process
Anyone who's about to begin the process of editing their book is bound to feel intimidated. From plot considerations to mistakes you'll want to avoid, editing a manuscript is a complicated journey that requires immense effort and attention to detail. But that doesn't mean it has to be anxiety-inducing – especially if you have the […]
Continue Reading