It feels like both a long time and no time at all since our Founding Editor, Helen Scheuerer, launched her debut YA fantasy novel, Heart of Mist.

Released through our imprint Talem Press in 2017, Heart of Mist was the first book in The Oremere Chronicles: a gripping, magical series about lands wreathed in deadly mist, people with deadly powers, and a mind-whispering orphan with a mysterious past.

The series’ second book, Reign of Mist, followed in 2018, continuing our journey into the mysteries of Oremere – and this year, that journey comes to an end.

On July 25th, War of Mist, the epic conclusion to The Oremere Chronicles, arrives. Full of explosive reveals and heart-pounding action, the third and final Oremere book decides the fate of your favourite characters – and the realm itself.

In case you missed it, here’s the synopsis and cover…

Toxic mist drives all life to the brink of destruction and the conqueror queen, Ines, has her talons in the kings of the realm.

Bleak, having discovered her true heritage, must now scour the lands for the one thing that might save them all.

But the search is a treacherous one – and it will push her to the very limits of endurance.

Amidst secrets, lies and the intricacies of battle, Bleak and her companions learn just how far they’ll go for the ones they love. But will it be enough?

As deadly forces grapple for power across the continents, families, friends and allies unite to take one final stand. 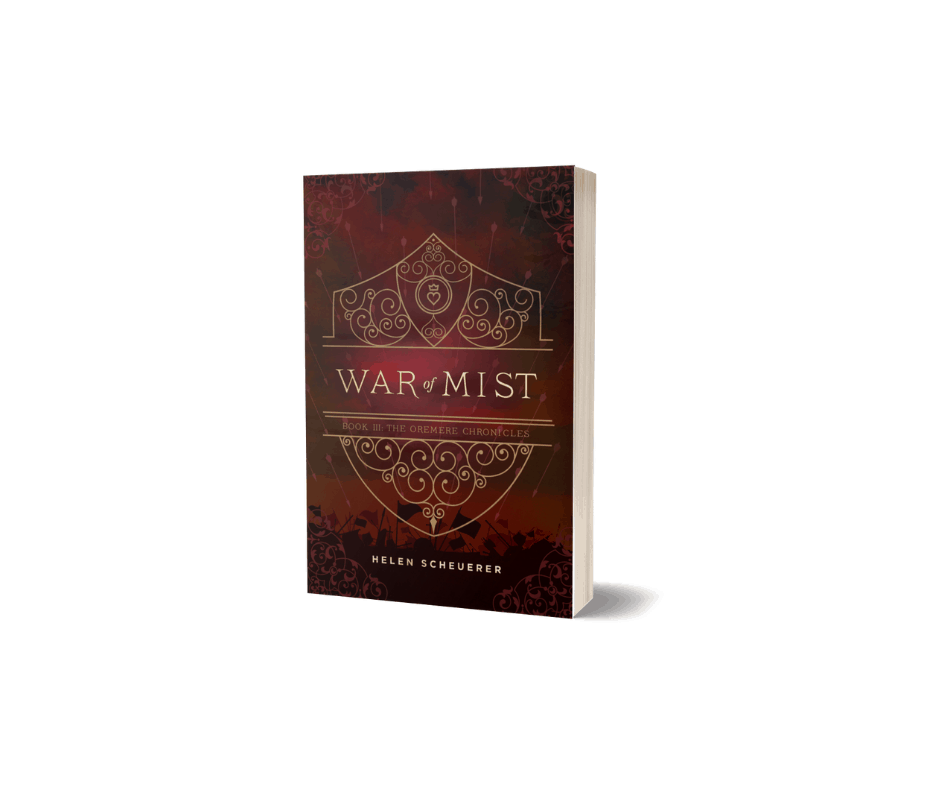 Ahead of War of Mist‘s release, we chatted with Helen Scheuerer about writing processes, lessons learned, and reaching the end of an era.

How does it feel to have reached the end of The Oremere Chronicles?

Reaching the end of the trilogy feels incredible surreal. Some days, I felt like we’d never get here and then other days, it feels like we’ve arrived at the finale all too soon.

To be completely honest, I’m nervous to share this final book with readers. This series has reached more people than I ever imagined, and with that comes a certain level of responsibility… I don’t want to disappoint those who have loyally followed the story over the years!

On the flip side, I’m very much looking forward to writing again. I feel like I’ve been reworking War of Mist for a lifetime now and it’s time to take a step back and get creative again.

Can you describe your experience writing the third and final book, War of Mist? Tying all the threads together must have been both satisfying and challenging!

Challenging is definitely the word for it!

I always knew how I wanted readers to feel at the end of the final book – however, I didn’t know the specifics of the ending. Writing War of Mist was an exercise in problem solving, plotting and letting the characters take me where they wanted to go.

I can’t say much more about tying the threads together without spoiling things, but hopefully readers find the outcomes and secrets revealed satisfying!

What have been your biggest lessons about the process of writing/plotting a series?

I definitely learnt the importance of plotting when it comes to a series. I wish I’d had the foresight to plot more extensively across all three books.

Will anything about your approach to writing change going forward?

Definitely. With each book I learnt new lessons, the most important being the one I mentioned above – how crucial it is to plot extensively (for me anyway).

I’ve already dedicated several months to plotting my next project. I’ve told myself I’m not actually allowed to write a single word until the plan is really refined.

Do you think your choice to pursue indie publishing has impacted the success of the series?

Absolutely. I don’t think any one else will ever work as hard as you to ensure the success of your book, and going indie allowed me to put all my efforts in, in a very controlled way.

I got to determine how my book was marketed and who it was marketed to. I got final say on things like the formatting and the cover. I honestly don’t think it would have turned out as well or reached as many readers if I had taken up a traditional offer.

What will you miss most about The Oremere Chronicles?

And I’ll miss writing in a world I’ve become incredibly at home in. Not to mention, the banter between my characters. I’ll definitely miss that!

Can you give us a hint at what you’ve got planned next?

Ohhhh, this is such a hard question because I’m absolutely dying to share my plans with everyone.

Unfortunately, as is the nature of the business, I can’t divulge much at all at this stage.

However, I can tell you that my publishing schedule takes me all the way into 2022 and beyond… So that’s something.

Also, our imprint Talem Press has some epic books by new authors coming up as well.

I wish I could tell you more about my upcoming secret projects, but we’ll just have to focus on the release of War of Mist for now 😉

Read the final chapter of Bleak and her companions’ story in War of Mist on July 25th, 2019. (Add it on Goodreads here!)

If you’re new to The Oremere Chronicles, check out the series on Amazon. And for more info on Helen, her books and her upcoming projects, head over to her website.

Claire is a freelance editor and proofreader based in Newcastle, Australia. She holds a B. A. in English and Writing and a Graduate Certificate of Editing and Publishing. Claire's biggest passion is working on editorial projects, particularly when it involves perfecting book manuscripts for publication. In her spare time, you’ll either find her reading or drinking endless cups of tea while writing things of her own.