Well-known to be one of the best short story writers of his century, Franz Kafka turns up in school curriculums and must-read lists often – and for good reason.

His stories border between realism and the wacky in ways that make us question what we know about life, humanity, and writing itself. 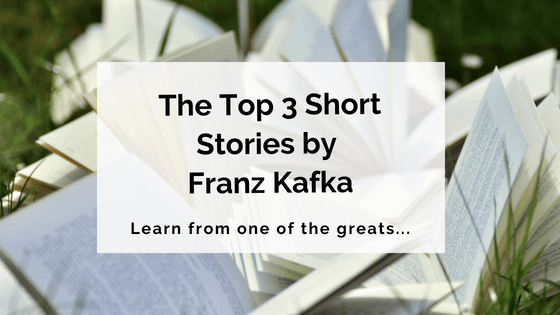 Kafka manages to do a lot in his writing and do it simply and humbly.

Like Hemingway, Mansfield, and Woolf, his writing was always among those that my lecturers spent hours poring over, line by line, for the meaning and truth hidden there.

The test of a good (literary) writer is in being able to read and re-read their work, always finding new things to question your thinking.

Kafka most definitely does this with his unmistakably unsettling writing.

Upon reading the introduction to one of his collected works, I found myself intrigued by how our personal stories impact our creative ones.

Translator and academic Michael Hoffman wrote that Kafka was ‘a publication-averse recluse’, and that his ‘biggest problems were always with himself, his self-doubt, his savage self-criticism’ (Hoffman 2007, ix).

Kafka certainly wasn’t alone in this – we’ve all been there.

But Kafka famously took his self-doubt to a new level by asking his closest friend, Max Brod, to burn all of his writings upon his death and let his previously published works sell out their copies (and not to re-print them).

Lucky for us, when the time came Brod was smart enough to keep all of Kafka’s work and approach publishers to have them posthumously printed.

With so much self-doubt pulling Kafka back it’s a wonder that he wrote as prolifically as he did, and with as much unique style.

Despite that nagging anti-muse that we’ve all heard in the backs of our own minds, Kafka managed to express himself artfully and write fantastical stories that are studied to this day.

5 Contemporary Short Stories to Inspire Your Own Fiction

What is ‘Kafka-esque’ writing?

If you’ve never read a story by Franz Kafka (which you should do right after you finish reading this!) it’s quite difficult to describe just how his writing makes you feel.

Hoffman says that Kafka’s writing is ‘a perfect work of literary art, as approachable as it is strange, and as strange as it is approachable’ (Hoffman 2007, viii).

There’s a sense that you’re reading a simple story, with simple writing, but you feel that you’re missing something that’s not so simple to grasp.

We obscurely feel, we bet, we practicality know there is something more going on in a story, something probably to do with sex or violence or families or metaphysics, but we’re damned if we know what it is.

Kafka-esque is a term coined to describe stories that border the surreal and the dark, self-interrogation of modernism. It’s a bit weird, a bit confronting, and completely literary.

Other famous writers who were either directly influenced by the Kafka-esque style or could be described as working in the same genre, include Albert Camus, Haruki Murakami, and Gabriel Garcia Marquez.

While all of Kafka’s works are worth reading, it helps to know where to start. This is by no means a definitive top three, but they’re a good introduction to the scope of Kafka’s style; quirky and fantastic, raw and confronting, subtle and heart-breaking.

Other popular works include The Trial and his first novel Amerika (also known as The Man Who Disappeared).

Undoubtedly his most famous work, ‘Metamorphosis’ or ‘Die Verwandlung’, is a great starting place for anyone new to Kafka’s writing. True to form, Kafka tosses the reader into the midst of the story, beginning ‘in media res’ when Gregor Samsa wakes one morning to find himself turned into a giant beetle (commonly thought of as a cockroach).

Gregor becomes isolated from his family as he struggles to communicate and to live a healthy life. He is ‘simply tolerated’ and he is abhorred, with the story exploring themes of depression, otherness, and in the very end, hope.

One of his longer works, ‘Metamorphosis’ can easily be read in a day and it’s the kind of story that you keep coming back to, always discovering little gems in the nuances of the lines.

In The Penal Colony

This was one of the more shocking stories that I read by Kafka, and while it confronts you with grotesque concepts it explores incredibly important themes about cruelty, judgement, and shame.

Another story that begins ‘in media res’, the story begins with a man who has been invited to tour a penal colony and the commandant’s torture machine that’s used as punishment. There’s an intense sense of irony in this piece, and it forces you to find meaning amidst the horror.

While ‘In the Penal Colony’ is confronting, it is certainly worth reading for its pacing, the way it slowly twists, and the striking characters that are so well rounded in such a short space of time.

While I read this piece for the first time I felt compulsion and helplessness; I wanted to do something in the story but I couldn’t. I think a lot of people feel this way every day, and Kafka captures that with the idea that ‘to starve is the easiest thing in the world’ (Kafka 2007, 254).

‘The Hunger Artist’ is about an occupation that, in the storyworld, was once popular and looked upon with reverence: to starve, artfully, for as long as possible. Being a hunger-artist eventually falls out of fashion, but one man keeps his act up while the world no longer seems to care.

Themes of isolation, similar to ‘The Metamorphosis’, and of art and self-expression sit under the surface of the story and make this a literary work that balances elements of magical realism with metafiction.

Kafka, Franz 2007, ‘The Hunger Artist’ in Metamorphoses and Other Stories by Franz Kafka, Penguin Books, England, 254