Today we’re going to talk about one of the most divisive literary devices around: the prologue.

As you probably know, a prologue is a section that appears before Chapter One in a book. The prologue is something separate from the main story, which always begins in Chapter One.

Some readers are OK with prologues. But some hate them, and will sometimes even bypass a prologue entirely on principle, skipping automatically to Chapter One. 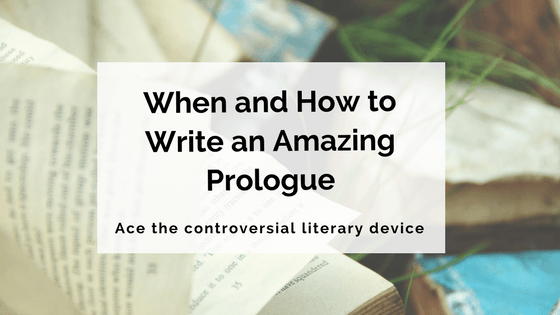 This applies to literary agents and publishers, too; some don’t mind prologues, but some will automatically be wary of a submission if it begins with the word ‘Prologue’ instead of ‘Chapter One’.

When it comes down to it, it’s really just a matter of personal preference. But as an author, you need to be aware of all the pros and cons involved in having a prologue.

So how do you know whether to include one or not? And if you do, how do you ensure it’s well-written and worthy of inclusion?

Let’s take a look at exactly when and how to write a prologue for your novel.

Should my novel have a prologue?

The first question you need to ask yourself is: ‘Does my novel need a prologue?’

Note: if you haven’t already started writing, don’t worry about this question yet. Just start the story wherever you feel is best, and when you come back later for structural editing and revisions, you can think more about whether to prologue or not to prologue.

If you have already written your novel, or if you have a specific scene or section in mind for your prologue, there are certain things you need to consider to determine whether the prologue is necessary or not.

Ask yourself the following questions. If the answer to any of them is ‘no’, you might need to reconsider including your prologue.

Does the prologue involve a different time, place or point of view than the main story?

A prologue should be entirely separate to the main story that begins in Chapter One. This means that the prologue needs to be characterised by one of the following:

Basically, a defining feature of a prologue is that it in some way doesn’t ‘match’ or ‘fit in’ with the rest of the story.

Does the prologue provide necessary information?

Think about what you’re trying to convey with your prologue. What purpose does it actually serve? What information does it provide?

If you’re simply including a prologue to set the tone/mood or establish the world of the story, consider doing so in Chapter One instead.

A prologue must provide information that’s important to the main plot of your novel. This could be something that foreshadows future events in the story, for example, or something that your main character doesn’t know (we call this dramatic irony).

Whatever you’re conveying with your prologue, be sure that it’s a) absolutely necessary, and b) something that couldn’t be conveyed elsewhere in the main story.

Be wary of providing too much information in your prologue, though – more on that below.

How to write a prologue

So! You’ve been through the above steps to determine whether your story actually needs a prologue, and you’ve decided it does.

To help you create a prologue that readers won’t want to skip over, keep the following do’s and don’ts in mind.

Prologues are more common in certain genres than others. You’re more likely to find a prologue in a thriller or fantasy novel, for example, than in a piece of literary fiction.

Keep in mind that prologues aren’t a requirement of any genre, no matter how common they might appear to be. Never feel you have to write a prologue simply because a lot of other books in your genre have one.

As with most aspects of writing, it’s all about what works best for your individual story.

Keeping it short and sweet is a golden rule when it comes to writing prologues. There are a few reasons for this:

Your prologue should ideally be a single scene or snippet that’s no longer than a handful of pages.

It really should go without saying, but the last thing you want is a boring prologue. As something that already makes some readers wary, your prologue really needs to prove itself immediately – and to do this, it has to be interesting!

Much like your first chapter, it should draw readers in immediately and entice them to keep reading.

However, don’t make the mistake of thinking that throwing the reader into the prologue in medias res is the only way to make it interesting and engaging. In fact, doing this in a prologue can actually be a misstep.

It can be jarring or overwhelming for readers to be thrown immediately into the action in a prologue, then pulled back out to a completely different time/place when Chapter One comes around – especially if that first chapter is actually slower-paced than the prologue.

For your prologue to work, it needs to strike a balance between hooking the reader effectively and not overpowering the first chapter.

Use your prologue as an info dump

One of the most common mistakes authors make when writing prologues is using them as a place for info-dumping. Fantasy authors are especially at risk of this if the prologue is used as a means of world-building.

Info-dumping in your prologue is a no-no for a number of reasons, chief among which is that it makes for a rather slow start. And as we discussed above, a boring prologue is a huge turn-off for readers!

Furthermore, it’s important not to assume that readers need to know everything about your setting before they start reading the actual story. Neither should you assume that they need to know your character’s entire backstory before Chapter One.

Prologues that exist solely for these purposes should be strongly reconsidered.

If you’re unsure whether you’ve fallen prey to info-dumping, read over your prologue and determine how much of it is background information. If the answer is ‘a lot’, it’s time to scrap the prologue and redistribute that information throughout the main story instead.

Give readers a ‘false start’

You don’t want to bait-and-switch readers with your prologue – that is, set up certain expectations in the prologue that aren’t met by the rest of the book.

If the main story veers off in a direction so different to the prologue that the two feel like totally separate entities, readers might feel confused or even cheated.

This applies to the voice and style of writing as well as the actual events of the prologue. If none of these elements are ever tied back in throughout the rest of the main story, you run the risk of disappointing or frustrating readers, or having them wonder what the point of the prologue was in the first place.

Forget about including a hook in Chapter One

It’s all well and good to have a great hook in your prologue. But don’t forget that your first chapter still needs its own hook, too.

As we mentioned above, it can be a real anticlimax if your prologue overshadows your first chapter. And remember that some readers will simply skip prologues altogether. If this is the case, it doesn’t matter how enticing a hook your prologue contains – the reader won’t know about it!

For this reason, Chapter One still needs to be able to draw the reader in just as effectively – if not more so – than your prologue.

Does your novel have a prologue? How do you feel about prologues as a reader?