Every year for the last three years, Writer’s Edit has launched a beautiful new book in the Kindling series.

With each launch party, we’ve seen writers emerge from their busy lives and travel from all over Australia to come together and join the festivities. With each book brought into the world, we’ve made new friends and helped spark the careers of many emerging writers. 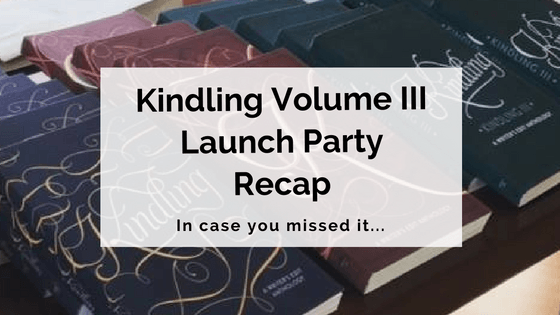 There was something different about this year, though: it would be the last Kindling launch for Writer’s Edit. And despite how sad the closing of this particular chapter may be, the launch itself was full of smiles and celebration for our three stunning anthologies.

On the 16th of November 2016, Writer’s Edit held the book launch of the Kindling III anthology, the final book in the series compiling fiction, non-fiction, and poetry.

The launch was held at the Madison Hotel’s Vine Bar, a lovely setting boasting the rustic charm of exposed brick walls with trails of fairy lights, exquisite designer candles, and vibrant bouquets of native flowers.

The entire Kindling collection was on display, and the colourful trio caught attention all across the room with the stunning covers created by award-winning designer Alissa Dinallo.

A welcoming atmosphere made conversation among authors and industry professionals warm and enjoyable, with many new friends and contacts made.

Over 70 people attended the launch and the party had record numbers of Kindling authors in attendance.

In her speech, Helen Scheuerer, the Founding Editor of Writer’s Edit and Editor of the Kindling anthologies, spoke of the opportunities Kindling III had given authors and the rewarding publication experience over the last three years.

We listened, rapt with attention, as Kindling author Kristin Prescott (an accomplished writer who has been published in all three anthologies) read from her non-fiction essay ‘The Death, Rebirth, and Revolution of the Book’.

The expression of love for storytelling inspired all those present, and we came away from the speeches feeling uplifted and hopeful for the publishing industry and our ongoing endeavours as writers.

While many were surprised that Kindling III would be the final anthology in the series, the launch succeeded in showing that this would not be the last project for Writer’s Edit.

It’s sad to think that we won’t be advertising for new submissions next year, or looking at mock-ups for a brand new cover, or seeing the final manuscript go to print. It’s sad that November 2017 won’t be the heralding of a new Kindling book. But it’s also exciting, too.

There’s so much more on the horizon for Writer’s Edit as an online magazine and as a small press – more writing projects, more publications, more inspiring ideas. And we can’t wait to get started!

We’ll always look at our trio of Kindling books with pride and love, because that’s what we’ve put into every single page.

We’re so pleased to bring you these three beautiful books of inspiration and instruction for the modern writer, and we’re so proud to end the series with the stunning volume of Kindling III.

To find out more about Kindling or to purchase a few copies for yourself, head to our Shop page. To see the full gallery of photos from the launch, head over to the Writer’s Edit Facebook page.