From essays in Seizure and Overland to short fiction in Seizure Flashers and Kill Your Darlings, Anna Spargo-Ryan is a name you’ve probably seen across Australia’s lit-journal landscape.

She has a memoir piece in the Black Inc. anthology From The Outer, and has worked on digital strategies for a number of organisations including Fremantle Media (Neighbours), Monash University, and the Formula 1 Australian Grand Prix.

This is a decidedly impressive CV. But for Anna, the fulfilment of a long-held dream is about to become the crowning glory of her achievements: the publication of her debut novel. The Paper House, forthcoming from Picador, is ‘the stylistically brilliant, fearless and heartbreaking story of a woman grieving the death of her child’.

Recently, we were lucky enough to chat with Anna about the inspiration behind her novel, the benefits of writing in different forms, and the lessons she learned during the publishing process.

Your debut novel The Paper House is just about to hit the shelves. Tell us about the inspiration and writing process behind this book.

I had this notion about a kind of magical garden, a place where a person might go to escape. I knew the main character would experience something traumatic, but I wasn’t sure what, so I started with a very upbeat period of just brainstorming terrible things that might happen to people.

I wrote the bulk of the story for NaNoWriMo in 2013. I tend to write fast or not at all, and NaNo is my preferred way of writing because I’m competitive and I hate losing, especially to internet graphs.

I mostly wrote in my local library, with a view over a huge paperbark gum that later appeared in the book. I took a lot of inspiration from life, especially when it came to matters of brains and love.

Can you tell us about what it was like working with a publisher on a larger work for the first time?

It was awe-inspiring to watch the team at Picador work on my book. They took the thoughts I’d had about what it should be and improved on every one of them, broke them down into all these incredible working parts of the overall book production process.

I was so lucky to work with some truly skilful editors. They helped me to understand where I had room to improve on the comment I was trying to make with my book, and how I could be better, stronger, tougher.

They taught me the value of constructive criticism, and what a gift it is. Their experience, and the way they were able to apply it to my book, vastly improved it in every way.

What was one of the biggest challenges while writing The Paper House?

I had an idea for a story, but not a plot. The manuscript my agent sent to Picador was beautiful, but it was fragmented in a lot of ways. The greatest challenge for me was to learn how to conceive of my whole book at once, so I could learn how to take my story ideas and my nice sentences and create an engaging work out of them.

It was a wonderful learning experience. I learned more about story structure in the time I spent editing this book than in all of the years of studying English that came before it.

You have been published in the likes of Overland, Kill Your Darlings, and Seizure. Do you think these earlier experiences contributed to writing and publishing a novel?

I was writing and publishing my novel while I was working on these shorter pieces. They gave me a great diversion from my story, and an opportunity to try other techniques and styles and structures in different ways.

When I was stuck on The Paper House, I took myself off to pen a story about a girl who was taken by the wind, and a man who drowned in a storm-water drain. These contributed to my novel in that they broadened the way I was approaching it. They gave me reason to think more creatively and not to be bogged down in what I had imagined the book ‘should’ be.

I think it’s easy to become rigid and unchangeable when you’ve been focusing on one manuscript for several years. Working with creative publications like these meant I had a legitimate reason to think differently.

Who are your literary influences? What books do you re-read?

Honestly, I can count on one hand the number of books I’ve re-read, because I’m constantly worried about not having enough time to read all the books I want to.

But I love stories by women who smash readers with truthfulness: Chimamanda Ngozi Adichie, Joan Didion, Zadie Smith, Helen Garner. They write with frankness and wisdom and insight, but they don’t labour over it. Their language is poetic and concrete and spirited. 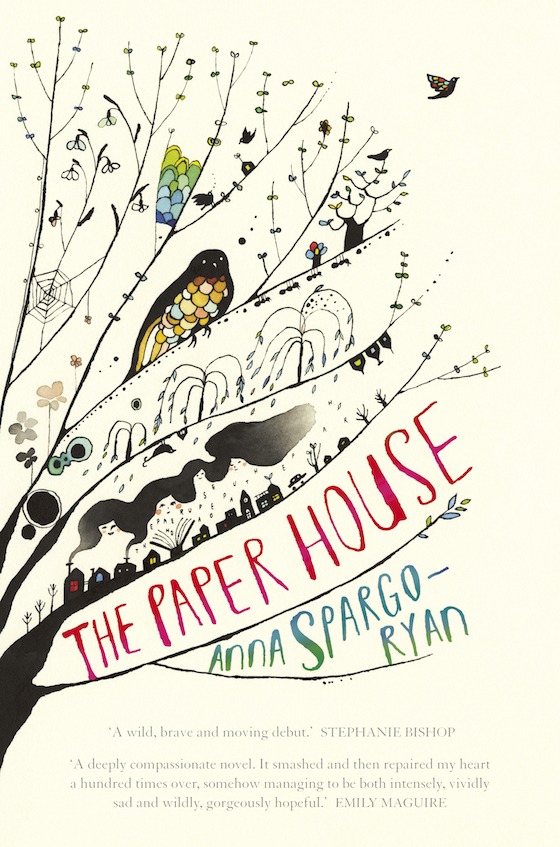 What’s one author lesson you’ve learned after The Paper House was signed with Picador?

To delight in patience. I have always been a very impatient person, but I have come to treat the downtimes of the process (between editing rounds, or waiting for proofs, etc.) as an opportunity to just imagine what a great success it might be. It’s a nice time, before the release, when anything is possible.

What’s next for you after The Paper House is released? Are you working on anything new?

I am! I’m writing a book set in regional South Australia, about a teenage girl working to protect her little brother at any cost. It’s about the effect of isolation and family violence on the family unit, and the children in that unit.

But, as with The Paper House, I hope it has a balance of light and shade. I want to achieve that with everything I write – the humour and wisdom of people, and the way that reflects the human experience.

The Paper House will be available in all good bookstores from May 31st, 2016. You can find out more about the book here.

Writer’s Edit would like to thank Anna for her incredible insights, and Alex at Picador for organising this interview.