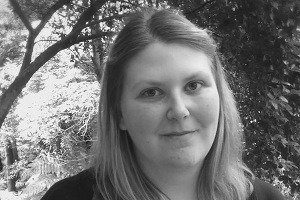 Kyra is a creative writer, editor, and reader. She was Deputy Editor of Writer's Edit from 2013-2016, and was also the Poetry Editor of the Kindling anthologies. She loves similes and metaphors, and her greatest joy when writing and reading comes from finding likenesses in the most unlikely of things.

Kyra studied creative writing and English literature at the University of Wollongong, was the 2012 winner of the Questions Writing Prize, and has been published in Seizure, Mascara Review, Space Place & Culture, Tide & Kindling. When she's not curled up with a book, Kyra can be found watching cheesy shows on Netflix, dreaming up new stories, or colouring in. She blogs at kyrathomsen.com and can be found on Twitter with @KyraThomsen. She is currently working on her first novel The Crossing. Bernadette Mung is an emerging writer in Sydney. She worked as Editorial Assistant for Writer's Edit from 2015-2016, and is now a Community Manager at a marketing agency. She completed her Bachelor of Communication (Creative Writing) at the University of Technology, Sydney. She firmly believes the best days begin with a cup of tea.

Since first reading Enid Blyton's The Faraway Tree as a child, Bernadette has fallen all the more in love with the art of storytelling. Most days will find her reading and writing short fiction, though future plans involve several novels and a flourishing blog. You can find a blend of writing, photography and lifestyle over on her blog, The Write Fuel. Tyng is currently completing an undergraduate in Media Studies (Journalism and Communications major) at the University of New South Wales. For this Malaysian-born writer, reading and writing has always been a part of her life as she grew up in a home filled with Enid Blyton and Roald Dahl classics. Presently, when she's not chasing stories as university assignments, she enjoys picking out books with odd titles on Amazon and writing about them.

Besides dreaming of opening a bookshop-bakery in her hometown, she hopes to be able to use writing as a medium to inspire, encourage and give voice to those who are less fortunate in the long run. Alyssa is an emerging writer from the Blue Mountains, NSW. She has dreamed of becoming an author from the time she could read, and spent much of her childhood stapling together her own little picture books.

She has recently finished a Bachelor of Arts (Honours) degree at the University of Western Sydney, where she studied English Text and Writing. Due to graduate later this year, Alyssa is now in the early stages of drafting out her first novel, and hopes to make her name in the writing industry. In her spare time, Alyssa enjoys curling up with a cup of tea, a good book, or an intelligent TV show. You can find a sample of Alyssa's poetry here. Jared is currently completing a Bachelor of Journalism at Monash University in Melbourne. In the past he has done a short course in creative writing and is hoping to steer himself into the world of books. Always encouraged to read he enjoys reading anything he can get his hands on and lately has been drawn to memoirs, essays and diaries.

Recently he has been spending his time writing short stories and putting together a novel that he is hoping to write after finishing his degree. Though his interests are primarily in fiction these days he is also trying his hand at non-fiction. Katherine O'Chee is currently completing a Bachelor of Arts (Media and Communications) degree at the University of Sydney. She is a writer and part-time blogger, an avid reader and a collector of inspiring quotes. Having been in love with stories from a very young age, she is always looking to transform daily observations into beautiful, philosophical tales.

When she isn't studying, reading or writing, you'll find her playing the piano, swimming laps at the pool, or multitasking - i.e. doodling patterns all over her notebook while listening to music on repeat, while drinking iced coffee, while surfing the internet in search of new books to read. In addition to her dream of becoming a novelist and screenwriter, Katherine hopes to one day inspire positivity, provoke deep thought and give a voice to the voiceless. You can read more of Katherine's writing here. April Davis is a Melbourne-based writer who has just completed her Bachelor of Professional Writing and Publishing. She spends most of her time writing blog posts, and contributing as a writer to online publications. The remainder of her time is spent working on her first book and baking anything that's filled with lots of sugar and fat.

Her favourite authors are Lewis Carroll and Kim Kelly, both of these authors inspired her to first pick up a piece of paper and start writing. She hopes to further her education by undertaking a Graduate Certificate in Communication and dreams of one day opening a book shop/cafe with her husband. Dean is a young writer from the Illawarra, NSW. He has a degree in Creative Writing from the University of Wollongong but has many interests. While at university he dabbled in environmental science, social science, biology, exercise science, and advertising.

Prior to this he studied journalism for a year. Ultimately he is always drawn back to prose and poetry, basing his work around a central emotional theme in an effort to impact upon the reader’s mood. His writing often contains distinct imagery of the environment and frequently features animals as he is a lover of the creatures we share our planet with. Laura has been an avid reader for as long as she can remember; she wore her 'I'd rather be reading' t-shirt with pride all through her teen years, and while the t-shirt is long gone the sentiment still rings true.

Inspired by her literary hero, Jo March, she had her first short story published as a precocious teen in a local publication, Ripper Reading, and while it's not quite The New Yorker, seeing her words in print was a very proud moment. After these giddy heights, she took a rather long hiatus from writing to travel and study, finally returning to the fold by completing a Post-Graduate Diploma in Writing, Editing and Publishing in 2010. Since then, she has been working as an editor, and has recently started a blog where she writes about all things books and reading. Liam Lowth is a writer from Brisbane currently completing a Film and Screen Media degree. He has had his short stories published and has previously worked as a copywriter. With an interest in travel and different cultures, Liam presents themes of displacement and ennui in his fiction, while in is non-fiction he turns to his wry sensibilities for inspiration. Liam’s love of film and screenwriting earned him a spot at the University of Arizona where he will be traveling to in the coming months. He looks forward to finding further writing inspiration with the change of scenery.

When Liam is not writing he loves to listen to music, drive and watch the world go by. Through writing Liam looks to understand the world around him, by understanding the motivations of characters, what drives a plot and how certain themes can be woven into the art of language. He hopes to one day publish a novel of his own, or work within the American film landscape.

You can see current contributors to Writer's Edit on our Meet The Team page.