After the thunderous success of his debut novel, Miss Peregrine’s Home for Peculiar Children, Ransom Riggs’ authorial sense of peculiarities and mysteries is back in its sequel, Hollow City. His debut success is no doubt a hard act to follow, having spent two years on The New York Times bestseller list, and with a much-anticipated feature film by Tim Burton on its way. The novel has also made its way into Amazon’s “100 Young Adult Books to Read in a Lifetime” list and has been praised repeatedly by Riggs’ peers – including John Green, author of The Fault in Our Stars, who remarked that the book was “tense, moving and wondrously strange”.

After reading and reviewing Miss Peregrine’s Home for Peculiar Children a couple months before, I too had my hopes up for what Riggs had come up with next. In all its expansive glory, Hollow City picks up exactly where Miss Peregrine left off. Jacob Portman, Miss Peregrine and the clan of peculiar children are floating aimlessly at sea in fear of being captured by their worst enemies – the frightful hollows and wights. Stranded in the foggy 1940s, they row their way to the disarrayed capital of the peculiar world that is London. 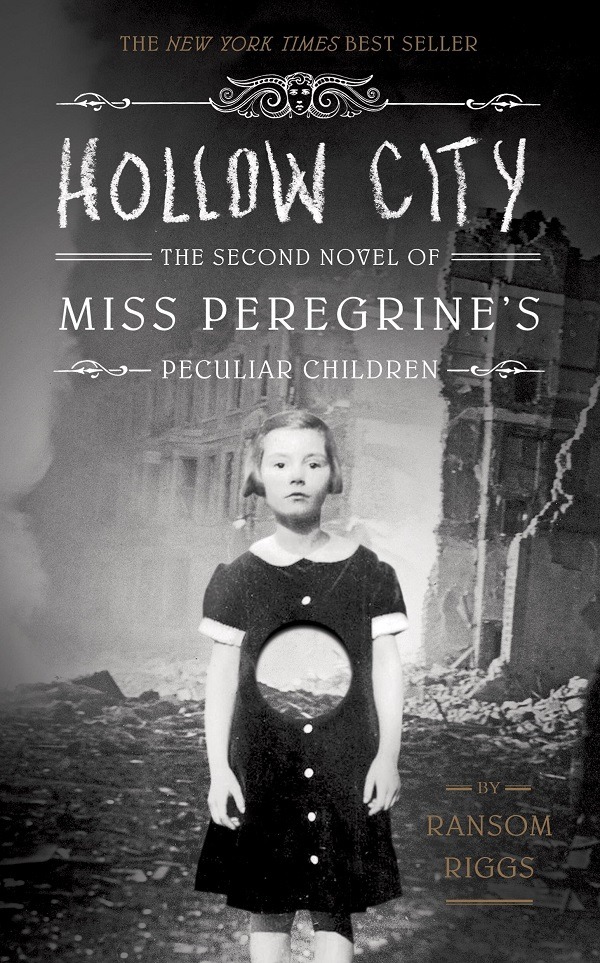 Hollow City is a compelling read packed with action, but with a cautious voice for adventure. Young Jacob Portman remains the same curious boy on a mission, but his purpose in the sequel has inevitably transitioned from “discovery” to “escape” with his newfound family, the peculiar children. It is their ultimate bid to save other peculiars who are also in danger of being captured by the hollowgasts, and at the same time prevent Miss Peregrine from being stuck as a bird.

Their journey of escapism reads like a singular, straightforward storyline, and we get a more intimate outlook from details of the journey such as the places they visit, new peculiars they encounter, conversations they exchange and emotions they feel. Jacob’s intuitive mind for mystery becomes less of a dominant voice as other characters of peculiars begin to emerge more significantly.

In contrast to Miss Peregrine’s Home For Peculiar Children, we spend more time with each character individually, learning about their personal thought processes through their journey. In this sense, Hollow City becomes an exploration of the strength and weaknesses embodied by each peculiar.

Through this exploration, the peculiars also become more relatable and understandable to readers. In an interview, Riggs remarked that each character “reflects an exaggerated aspect” of his own personality:

Enoch is me when I’m grumpy and petulant. I sometimes have a tendency to deliver mini lectures on obscure subjects people may or may not have an interest in, and I channel that when writing Millard. Emma is always a joy to write because she says exactly what she means, sometimes too forcefully for her own good, which can be cathartic. I aspire to be as nobel and loyal as Bronwyn. I love finding new characters along the way too, like Addison, and seeing where the story takes them.

With a more intimate outlook on these characters, the difference that Hollow City presents as a novel is the variety of voices. We are no longer reading the peculiar world only through Jacob’s curious mind, but also through the lens of children who have lived through the history of world war.

This lends a fascinating dimension to the story, as it introduces the perspective that these children could be as old as our own grandparents – Emma herself is at least eighty years of age. Yet, they are still able to enjoy the heart of childlike experiences like young romance and bedtime stories. As childlike as the characters are made up to be, Riggs encapsulates so incredibly the tapestry of old-age wisdom in their understanding of world while preserving the innocence in each character.

In essence, Hollow City is twice the details, but half the pace of what Miss Peregrine’s Home for Peculiar Children was. While Riggs doesn’t disappoint with his exquisite taste for action and adventure, the singular timeline of the narrative may feel like a downfall to the overall enjoyment of the book.

As another point of comparison, Hollow City loses the plot of the modern world and the magical time travel loop from Miss Peregrine, which contributed to the transitions between a historical and modern setting. We lose external voices in the modern world, such as Dr Golan and Jacob’s grandpa, but subsequently find the voice of inner unity and strength in a group of lost children.

Perhaps one of the biggest challenges faced by Riggs in writing this sequel was to match up to the uniqueness of the bizarre vintage photographs featured in the first novel, while simultaneously creating a logical storyline. As we know, Miss Peregrine’s Home for Peculiar Children was inspired by vintage photographs picked out by Riggs even before he had a story in his mind. This unusual way of storytelling was a great influence to the success of the book and, naturally, Hollow City was shadowed by the anticipation for more such surprises.

In this book, Riggs incorporates photographs that are mildly odd (though not as odd as what you would have seen in the first novel), but they feel more like understated elements that aim to merely portray the visual context to readers. Fans of the first novel would not be able to help but feel slightly disappointed with this subtler array of photographs. Though they remain ever a curious element to look out for as new peculiar characters begin to emerge, the novelty seems to have worn off just a little bit.

For me, Hollow City sits a level below its predecessor, but I still marvel at the way Riggs strings prose and imagery together perfectly. His elegant taste in words is definitely something to look forward to in the novel. The imaginative detail and effort put into the atmosphere of the book will have you right there with the peculiar children and the dangers they encounter.

At the end of the book, Riggs pulls out what is perhaps the most emotionally provoking part of the novel. The unexpected twist not only shocks the storyline but also appears to be an intelligent set up for the follow-up novel, Library of Souls, due to be released in a couple of months. Till then, we live on the words that hug the themes of both Miss Peregrine’s Home for Peculiar Children and Hollow City…

At the heart of nature’s mystery, lies another mystery.

Tyng is currently completing an undergraduate in Media Studies (majoring in Journalism and Communications) at the University of New South Wales. When she's not scrolling the news or arranging interviews, she writes for various online magazines. As she explores the enjoyment of writing, she is fascinated at the way words are able to influence human emotions. In the long run, she hopes to be able to use writing as a medium to inspire, encourage and give voice to those who are less fortunate.