For those about to start NaNoWriMo – we salute you! In fact, we’ll even join you! We’ve got some fantastic writing exercises planned for October and November, to help you (and everyone else writing as per usual) to get a few more words on the page. 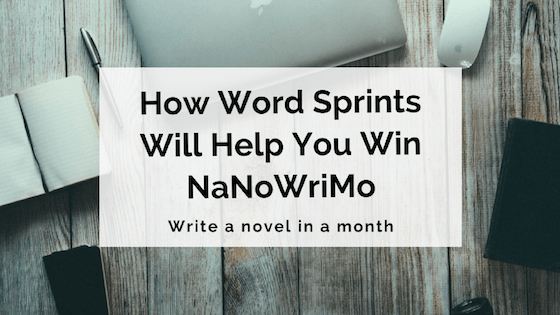 What is NaNoWriMo and why should I get involved?

NaNoWriMo stands for National Novel Writing Month, where participants aim to write 50,000 words of a new novel or project in the month of November. Writers from all around the world sign up and start writing on November 1st.

There’s a large online community surrounding NaNoWriMo, in both online forums and chats, and on Facebook and Twitter.

When you’re attempting a difficult feat like writing 50,000 words in a month, having support from other writers makes all the difference (even if those people are strangers!).

People get involved in NaNo to get their novels written and to be part of the buzzing writing network.

If you’re looking to get to know other writers all over the world while also challenging yourself as a writer, NaNoWriMo is for you! It sounds impossible, but it is achievable! Read our essential NaNoWriMo survival guide here.

What is a ‘word sprint’?

A word sprint is an online writing exercise organised through Twitter. A call-out will be announced to writers, asking them to join in a sprint at a particular time of day and for a certain number of minutes.

The goal is to write as much as you can, and then share your achievements with your fellow sprinters. At the next sprint, you try to beat your previous word count. Here’s how it works:

Lots of people participate in word sprints during NaNoWriMo, but also throughout the rest of the year as a fun way to keep writing.

Some of the key hashtags to look out for when sprinting include: #wordsprint #writingsprint #amwriting #NaNoWriMo #NaNoWriMo2016 and #NaNoPrep

Why should I do a ‘word sprint’?

Not everyone has hours and hours in a day to simply write, so word sprints are a fun way to force yourself to sit down and write furiously.

Even if you only sprint for 10 minutes, you may come away with a few hundred words written. And every word counts!

Word sprints can be anything you want them to be, and sometimes it’s easier to sprint when you jump straight into it without really thinking.

Writing stream of conscious, a letter, or an abstract poem forces you to think quickly and creatively without worrying too much about technique and word choice.

By writing something brand new and writing as fast as you can, you step outside your comfort zone and replenish your creativity for those bigger writing projects.

Sometimes we need a little push to get going. Knowing that other writers are out there in the world doing exactly what you’re doing – well, that’s a great feeling!

Putting yourself out on social media during a sprint creates accountability when you’re writing.

There’s a sense of responsibility that forces you to work harder and write faster. Any way to get more words on the page!

What online writing events does Writer’s Edit have planned?

In October, NaNoWriMos be planning and prepping like crazy. That means writing lengthy character summaries and fine tuning plots (and oh, so much more!).

So for #NaNoPrep, Writer’s Edit be hosting a few online word sprints late in October to get your writing muscles used to those long thousand-word marathons.

For the real deal in November we’ll be hosting several word sprint challenges, as well as posting writing prompts and quick tips on Twitter. We’ll be checking in with how you’re progressing and pushing you to keep writing.

Want to get involved? Good! Because we want you to write along with us. It’s a lot more fun with friends, trust us.

When will Writer’s Edit be sprinting?

Writer’s Edit will be doing preliminary sprints late in October to get you ready for long word counts in NaNoWriMo.

Follow us on Twitter to keep up to date with when the next sprint is occurring, and don’t forget to Tweet us so we can have a chat!

You can also get in touch with our editorial team who will also be sprinting!

What if I’m not doing NaNoWriMo this year?

It doesn’t matter! There are plenty of writers out there who aren’t doing NaNo but are still writing or planning or editing.

If that’s you, we want you writing with us as well! Not everyone here at Writer’s Edit will be participating in NaNoWriMo, but that doesn’t mean we stop writing.

Join in the fun, get some words on the page, and get to know other writers at the same time. Sounds pretty good to us!