So you’ve created a fantastical world full of unique cultures and ideas, and a diverse cast of characters to reflect that. And to add even more depth to your characters and setting, you want to weave in different languages.

As a fantasy writer, using multiple languages has probably crossed your mind. While not an absolutely essential element of a fantasy novel, invented languages, if used well, can contribute to rich world-building. But how do you actually write different languages into your prose? 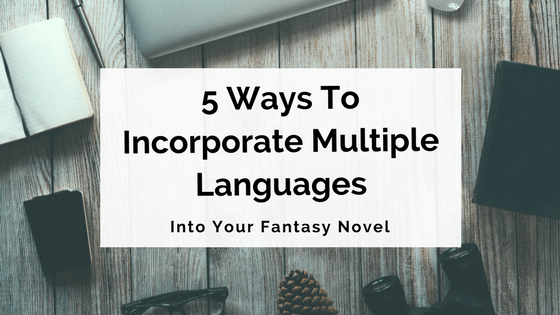 Here are five different ways you can bring multiple languages into your fantasy novel.

1. Write the meaning, not the words

One option is to explain in narration what characters are saying in another language. For example: The elf explained how to reach the mountains.

To be clear, mention that the elf was speaking Elvish, or make sure to establish that the elf either cannot or will not speak another language. Also, your POV character must understand Elvish for this method to work.

This is an alternative to inventing and writing out actual dialogue in the language you’re referring to.

This way of incorporating languages is best used occasionally, when you want to include a large amount of foreign dialogue. Its downside is being more tell than show and not particularly exciting to read.

What if your POV character doesn’t know the language?

If your POV character does not know a language, you should not write the meaning of that foreign dialogue, unless a translator is nearby. To still use this technique, simply write something like: The elf pointed and said something in Elvish.

It’s possible your POV character would not even recognise which language they were hearing. This is the case in the beginning of Raymond E. Feist’s Magician:

When the boys said nothing, he appeared to grow angry and yelled another series of strange words, from the tone seemingly questions.” — pg 68

Another way to include languages in your story and characters is to note the language in dialogue tags. For example: ‘You can’t go there,’ she said in Latin. As well as dialogue tags, you can describe the language within your narration around the conversation.

The queen withdrew as if she had been stung and then repeated in the ancient language, ‘O my daughter, I have wronged you.’ ” — Christopher Paolini, Eldest, pg 226

This is probably the simplest technique, and the least likely to confuse your reader. However, it lacks a sense of being there, surrounded by different sounds and accents and words. To highlight the feel of foreign dialogue in your story, try one of the next three tips.

3. Include a translation guide

A popular choice with fantasy novels is to have a translation guide at the back of the book. It’s an easy, clear way to fill your pages with an extra language — or three!

However, a translation guide causes your reader to constantly flick back and forth, and this runs the risk of breaking your reader out of your story’s flow. Sometimes readers don’t even bother to check the translation, and just skip over your carefully written dialogue.

Be careful: fiction is about plot and about characters. It’s not about your ability to make up words.” — Iulian Ionescu

To use this method, you will need to put some serious work into language creation. Or, you could pay a specialist, called a conlanger,  to create a language to your specifications. Bear in mind that actually inventing and including a foreign language is no mean feat, and cannot be done half-heartedly.

To have a translation appendix work well, you will want to introduce the foreign languages slowly. Readers are less likely to skip over dialogue if they are far enough in the story to be invested in the characters’ journeys.

How to set up your guide

You’ll want to start your translation guide as soon as your start writing. Even if you chose not to use this method for your readers, a translation guide will be vital to help you, the author, keep track of everything!

Typically, translation guides are alphabetical according to the English language. If there are multiple languages, each language is split into its own section.

Authors sometimes split their translations again, into names, locations and words. You may choose to use this method if the translation of names and places are significant.

You could teach your readers a few words in your foreign language, then use them in dialogue to indicate language. Your language could have a particular greeting, or a phrase that ends their dialogue, indicating that the next person may speak.

Fabio smiled. ‘Bene. Well, now that you have arrived, you must forgive me but I must leave you – immediately.’ ” — Oliver Bowen, Brotherhood, pg 139

The best way to teach these words to your reader is to have a character ask the meaning of a certain word. This flows smoothly if a particular phrase is used regularly in the language. You could also reveal the meaning in narration, or a character’s thoughts.

Move flexibly back and forth between invented words and the English-equivalent as necessary to make it easy for readers to remember meanings and follow the action.” — Roberta Osborn

You can try teach your readers as many phrases as you want. But make sure it is always easy for a reader to glean what is happening, even if they’ve put the book down for a while.

Combine with other techniques

It may be unclear that characters are speaking entirely in another language, and not just throwing in the odd foreign word. You can avoid confusion by combining this method with the dialogue tag approach. That way you are clearer and create a richer sense of multiple languages.

If you are struggling to teach your readers your key words, or are worried they will not pick up on their meaning, you can also include a translation guide.

The final option is to write foreign dialogue in English, but use different punctuation. It is a particularly good solution if your foreign language is a bit unconventional – for example, not spoken but signalled.

In The Bitterbynde Trilogy, Australian author Celica Dart-Thornton has a sign language for her mute characters. Instead of using quotation marks, she uses the greater-than (<<) and less-than (>>) punctuation marks:

<<You may keep the rooster,>> she added.

Patrick Rothfuss also includes a sign language in his series The Kingkiller Chronicle, but it’s a little different in that it doesn’t convey words. Instead, speakers of the Adem language use hand signals to indicate facial expressions and tone of voice.

This ‘language’ is written in italics with no quotation marks, and with one or two words per sentence:

‘Painful for feet?’ I asked, trying to lighten the mood a bit. Amusement.

Anger. Disapproval. ‘No. Difficult to walk. Easy to fall on one side. Difficult to stay.’ ” — Patrick Rothfuss, The Wise Man’s Fear, pg 586

When you use this technique, you will need to combine it with one of the other four when it is first introduced to indicate what language is being spoken. This is particularly important if you have multiple foreign languages.

Languages add such a beautiful depth to fantasy worlds, cultures and characters. There are multiple methods of incorporating them, all of which can be combined and alternated between to achieve the immersive experience you want for your readers.

Kyla Jo Magin is a graduate of QUT’s Creative & Professional Writing and UQ’s Writing, Editing & Publishing. At the astute age of 11, she announced her ambition to work in the publishing industry and hasn't looked back since. She’s since worked with a range of fiction and non-fiction projects, both with a publishing house and as a freelancer. Aside from books, she loves art, cats, tea and chilly mornings. You can learn more about Kyla Jo at empathyediting.com.au