Structure, or form, is the arrangement of story elements according to purpose, style and genre. Structure doesn’t just happen on its own. Rather,  it’s carefully considered by the author to make sure their intended meaning is conveyed.

In order for a story to be truly immersive, the structure must play the part of a skeleton. In other words, the structure supports the story to ensure the most powerful delivery of elements, yet in a manner unseen and not easily identified by the reader.

Fiction is supposed … to be entertaining and narrative, so structures have to be buried a little bit. If they become foregrounded too much, it stops being fiction and starts being poetry – something more concrete and out of time.” — Eleanor Catton

Structure may be confused with plot. While the plot is the events in the story itself, heavily affected by character, setting and theme, the structure is how these elements are presented to the reader. 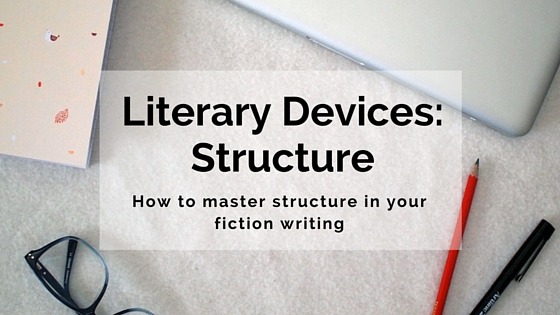 Why do we need structure?

Structure is the literary device that turns words and sentences into a story. It aims to present that story in the most favourable way, for a specific audience. The writing process is more than simply piecing together words on a page:

… turning all that raw material into a novel isn’t simply a matter of putting it into words on a page or screen. You have to ‘translate’ it into a form that readers can relate to. That’s what structure does. And if you ignore it or mess with it, you risk frustrating – or worse, losing – readers.” — James Scott Bell

Consider this very article. If we opened with the ‘tips’ section, and finished with a definition, readers would become frustrated, scrolling up and down to make sense of the information. If all the quotes were lumped in a pile right in the middle of the article and sub-headings placed at the end of their sections, instead of at the start, would the article be easy to read? No.

It doesn’t matter if your sentences alone read like golden honey. Your story must have a readable and engaging structure or your readers will switch off.

Most stories can be either rigidly or loosely aligned to a particular structure and these can be expressed through simple diagrams.

A common example of structure in modern fiction is The Fichtean Curve, involving moments of rising and falling action, a climax at the height of the curve and a resolution, may it be a happy ending or a tragedy.

Perfect for fantasy or science fiction, the Hero’s Journey begins with an interruption to a protagonist’s everyday existence by an opportunity for adventure. They journey into the unknown, facing obstacles and undergoing a gradual metamorphosis. After overcoming every hurdle, they return to their old world with a new mindset. Tolkien’s The Hobbit, is a fine example of this structure.

Another common structure, In Media Res, means ‘in the middle of things’. If your story begins on the third or fourth crisis point of a Fichtean Curve, the stakes are very high already. You hook your readers in from the first word. Events prior to the start of the story are revealed gradually through the narrative or through flashbacks, like in the movie Vantage Point. Alternatively, any boring introductory scenes can be dismissed entirely, like in William Golding’s The Lord of the Flies or Hatchet, by Gary Paulsen.

Frame narratives are, as the name suggests, stories told within stories. Useful for setting the stage or casting doubt on the reliability of a narrator, this structure is more common in the crime, adventure or fantasy genres. The Farm, by Tom Rob Smith and every title in the Redwall series, by Brian Jacques, are frame narratives.

Historically, the popularity of different types of structures has fluctuated. Of course, as story-telling continues to evolve, structures are constantly reworked, simplified and deconstructed, according to the writer’s target audience and purpose.

The way that writers approach structure can vary. At one end of the spectrum are the strict planners. Before they beginning a first draft, these writers spend hours constructing each scene and the order in which the scenes will appear.

Some writers can produce marvellous plots without planning it out, but I can’t. In particular I need to know the structure of a novel: what’s going to happen in each chapter and each scene.” — Emma Donoghue

At the other end are the writers who leave the story in charge, writing without the ‘restriction’ of a preconceived plan.

I don’t plot the books out ahead of time, I don’t plan them. I don’t begin at the beginning and end at the end. I don’t work with an outline and I don’t work in a straight line.” — Diana Gabaldon

And then there are the authors who occupy the middle ground.

I always have a basic plot outline, but I like to leave some things undecided while I write.” – J.K. Rowling

Newer writers need time to discover how they work best when it comes to planning. On the other hand, you might already know where you stand, so it’s best to go with what works best for you.

In some instances, such as children’s picture books, the structure will be fairly straightforward. Other books are more expansive, such as David Mitchell’s Cloud Atlas or The Lord of the Rings trilogy.

I first read The Lord of the Rings as an adolescent. It’s a dense novel, a sprawling, complex monster of a book populated with a prolific number of characters caught up in a narrative structure that, frankly, does not lend itself to conventional storytelling.” — Peter Jackson

Tip: Reflect on some of your favourite poems or books and see if you can identify the structure. In most novels, you should be able to plot a graph of the structure and locate critical turning points.

The first stage in the editing process is called a structural edit. This only highlights the importance of a strong structure. Even before an editor looks at a manuscript at the sentence level, they start by gauging whether the structure is logical and appropriate for the intended audience.

Tip: Before you send your work to a professional, you too, should consider structure when you first edit your text. Read through your work from start to finish, checking that sentences, paragraphs and chapters flow with logic and clarity.

Furthermore, you can check the pace of your story through a broad lens. Is one chapter far longer than most of the others? Are some chapters too short in comparison?

Some authors may choose to toy with structure. Understanding your purpose is important. However, it’s also crucial to note that straying from the norm might not be as popular as sticking to well defined conventions.

This doesn’t mean that you should shy away from experimentation. When practising your craft simply for your own benefit, not for publication, you might choose to remove a critical turning point or write a story so convoluted that readers can’t make sense of it.

Tip: Try planning and/or writing your story from the end. Understanding the fate of your characters will strengthen their personality and motivations when the story is read from the beginning. And as you track backwards towards the beginning you’ll know for sure that the end of the book is supported by every word that comes before it.

Structure is translation software for your imagination.” – James Scott Bell

At first, structure might not seem like the most important device, but imagine if you had no skeleton. Imagine if your car had no chassis, your bridge no pylons. Your story will fall and fail. This device is a must-have for your literary toolbox. Now it’s over to you!

Teacher by day and writer by night, Daniel Murphy has self-published three books and appeared in Writer's Edit's anthology, Kindling 2. Currently living in Port Augusta, his spare time is dominated by sports rehab and complicated by part-time study. He loves cooking, reading and road trips.