Writing a novel is hard, especially if you’ve never done it before. You’ve spent hours researching, building your world and becoming an expert on your characters. Now you’re ready for the next step: planning.

While some people like to write organically (letting the story take you in whatever direction feels right), having a detailed outline can help make the novel-writing process a lot less daunting and overwhelming. But how exactly do you plan a novel?

Don’t have time to read the whole post right now?

Essentially, there is no right or wrong way to outline your novel. Each story is different and needs to be told in a different way.

However, if you need a bit more guidance on how to plot out the next bestseller you know you have inside you, the three-act structure might be for you. 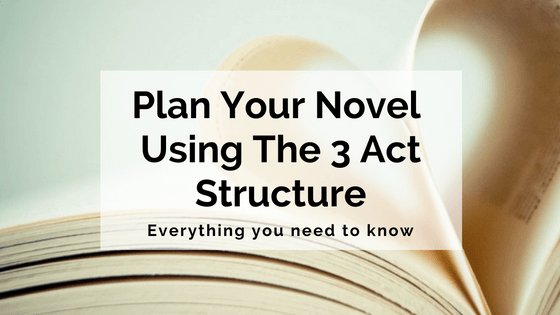 The three-act structure is a popular screenwriting technique that revolves around constantly creating set-ups, conflicts and resolutions. With this structure, a novel is divided into three acts: a beginning, a middle and an end.

There are many versions of the three-act structure. In some, the middle is the same size as the beginning and end put together.

However, when you’re first starting out, it’s much easier to plan each act as the same length. In this version of the three-act structure, each act is divided into nine chapters for 27 chapters in total. The nine chapters in each act are also split into three blocks of three chapters each.

Throughout this article, we’ll take a look at what each section of the three-act structure involves, using examples from The Hunger Games to demonstrate each element. (SPOILER ALERT: If you haven’t read or seen The Hunger Games and don’t want key plot points spoiled, read on at your own risk!)

The first act is used to introduce the reader to the world your characters live in and to set up the coming conflict.

In the third chapter, the hero reacts to the inciting incident. The immediate reaction in The Hunger Games is when Katniss’ family and friends come to say goodbye to her before she leaves for the Games.

Chapter Four is where the hero reacts to and reflects on the long-term impacts of the inciting incident. In Chapter Four, Katniss reflects on the impact her death would have on her community, especially her mother and sister. Katniss also starts to discuss strategy with Haymitch, her mentor.

As a result of their reflection, the hero decides to take action and do something to change their situation in Chapter Five. In The Hunger Games, Katniss takes her first step towards winning the Games in the parade of tributes. Her fiery dress and attitude win over the crowd.

Chapter Six details the immediate consequences of the action the hero took in Chapter Five. In The Hunger Games, Katniss discusses the success of the parade with Haymitch. She also reflects on her past and the difficulty of rebellion.

The hero’s life has changed as a result of the action they took in Chapter Five, and this creates a lot of pressure and stress in Chapter Seven. The pressure is obvious in Chapter Seven of The Hunger Games. Here, Katniss has her demonstration where she shows the Gamemakers her archery skills by shooting an arrow towards them in frustration.

As a result of the pinch, the hero is pushed into a new world in Chapter Nine. The majority of this chapter in The Hunger Games centres around the television interviews with Caesar, the last formality before the tributes are sent into the Games. Here, Peeta declares his love for Katniss.

The second act is full of conflict.

Character development is crucial in the second act; the hero at the end of Act One does not yet have the tools (whether those tools be emotional, physical or literal items the hero must retrieve) to succeed in the third act, so Act Two is all about the journey.

Chapter 10 allows you to introduce the reader to the new world. What has changed, and how does the hero feel about it? In Chapter 10, Katniss finally enters the Hunger Games.

In Chapter 11, the hero can take a break and have a little fun. Maybe they have a date with their new lover, or maybe they do something they’ve never done before. Here, Katniss travels through the arena looking for water, and while she is still in an intense environment, she still has a bit of a break.

Chapter 12 is time for the hero to compare their current world to how things were at the novel’s beginning. After realising Peeta has teamed up with her enemies, Katniss reflects on their relationship and compares this Peeta to the person she was friends with.

The fifth block is all about the midpoint, or the main crisis or conflict of your novel.

Chapter 13 is the build-up to the midpoint and Chapter 14 is the midpoint itself. A good midpoint will dramatically change the hero or impact their life in a negative way. In The Hunger Games, Katniss is pushed towards the Career tributes in Chapter 13, and escapes from them after Peeta saves her in Chapter 14.

Chapter 15 is the immediate reaction or consequence of the midpoint. Here, Katniss makes an alliance with Rue and they formulate a plan to take down the Career tributes.

In Chapter 16, the hero reflects on the long-term impacts of the midpoint. In The Hunger Games, Katniss realises that to take down the Careers, they need to stop their food supply.

In Chapter 17, the hero decides to take action to resolve the problem created by the midpoint; however, they realise the enormity of their task when things don’t necessarily go to plan. In Chapter 17, Katniss blows up the Career’s food supply, but before she and Rue can celebrate, Rue is attacked by another tribute.

Despite the set-backs, in Chapter 18 the hero decides that they will succeed no matter what. Rue dies in Chapter 18, and Katniss promises to win for her.

The final act is all about resolutions. In the third act, the hero needs to find solutions to the conflict created by the midpoint, and you as the author need to make sure you tie up all the loose ends.

In Chapter 19, the hero faces significant trials. These trials are extremely difficult for the hero and is something the hero has never experienced before. Here, Katniss races to find Peeta and struggles to help save his injured leg.

Chapter 20 is the second pinch, where the hero experiences something completely unexpected that makes everything even worse. In Chapter 20, Peeta’s injury leads to blood poisoning.

This plot twist leads to the darkest moment in Chapter 21 where the thought of success is incomprehensible. Here, Katniss risks everything to get medicine for Peeta, and the chapter ends with her passing out from her own injuries.

Having hit rock-bottom, the hero remembers their desire to succeed in Chapter 18 and finds the power within to continue on. In Chapter 22, Katniss and Peeta both start to recover from their injuries.

After deciding they can do it, the hero takes action in Chapter 23, and this action causes the plotlines to converge and come together in Chapter 24. In Chapter 23, Peeta and Katniss realise how close they are to winning, and in Chapter 24 all of the tributes are pushed towards the lake by the Gamemakers for the final battle.

Block nine is the finale. In Chapter 25, the character has one last battle. This doesn’t have to be a physical battle – it could be a fight between friends or lovers, or a mental battle your hero has with themselves. Here, Peeta and Katniss try to survive the freezing night and kill Cato.

Chapter 26 is the final climax. The decisions the hero makes here will impact the rest of their life; it is the point of no return. In The Hunger Games, Katniss and Peeta pretend to eat the poisonous berries, which leads to President Snow stopping them by declaring them both winners. However, Katniss realises that despite winning the Games, she’s now in even more danger.

Chapter 27 is the resolution or the immediate reaction to the hero’s decision in the last chapter. Here, Katniss and Peeta finally get to go home.

The way you end your novel is up to you. You might choose to explain everything, or leave some or a lot of things up to your reader’s imagination.

When you start to plan your novel using this structure it’s important to remember it’s just a guideline. You don’t have to change your story to suit the structure; you can change the structure to suit your story. If your plot twist would make more sense earlier or later, move it.

So take a deep breath, set yourself up in your favourite place to write and start planning!

Emma Johnson is a Freelance Writer and Editor from Brisbane. She has a Bachelor's degree in Creative and Professional Writing and Public Relations and is currently completing a Master's degree in Editing and Publishing. She has worked as a copywriter/editor for a variety of magazines and loves nothing more than curling up with a book and warming her hands on a hot mug of coffee. You can follow her reading and writing progress here.