Since getting stuck into the structural edit of my novel, I’ve been doing a lot of reading about sex scenes in fiction. When should they be included? What makes them work? What makes them fail spectacularly? What warrants a ‘Literary Review’s Bad Sex Award‘?

Originally, there was only one sex scene in my novel, but at the request of my publisher, I’ve since added two more in, and recently, I’ve had the somewhat surreal experience of critiquing these scenes with my editor. 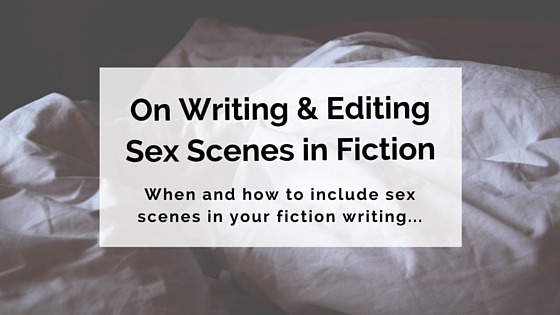 Editing in general can often be an intimate discussion regarding the intentions and interpretations of characters versus those of the author, but when it comes to the more explicit scenes in fiction, the process involves even more lengthy debates.

My editor and I read articles on the subject, and researched the best sex scenes in literature (the library scene from Atonement topped most of those lists, in case you were wondering), and realised that in any context, sex is a tricky subject. Perhaps largely because it plays such a major role in people’s lives, and yet it remains arguably a mystery to us, often still taboo, and kept behind closed doors.

Personally, I’m often confused when there’s zero sex in a book, as it’s such a big part of life, it lays bare motivations, desires and consequences, all of which tell you a lot about a character. Sex can be ugly, uncomfortable and awkward just as much (if not more often) than the head tossing, back arching cliches we so often see in fiction.

It can mean the start (or the end) of something, and set into motion a series of events. It’s a fact of life, just like birth and death, violence and love – none of which we shy away from when we write, so why is it different? Why should sex be metaphorical and ultimately glossed over, when it’s acceptable to create a vivid description of someone being shot in the face?

My editor and I discussed all these issues, before we got down to the nitty gritty sentence-level of the scenes themselves. The scenes I included weren’t particularly explicit in terms of naming body parts and describing actions in detail, but there was definitely more description than the ‘kiss and fade out’ option some authors favour.

So, within the comments section of Microsoft word, my editor and I tried to work out what makes a sex scene ‘literary’, and what factors separate these scenes from erotica, or worse ‘smut’. The use of language in these scenes is definitely tricky; too anatomical and the moment’s ruined, too vague and no one knows where what is going where or how the characters feel.

I also learnt as a writer, you also have to be wary of the fact that one person’s turn-on is another person’s deal breaker, which is probably why so many authors choose to keep it vague.

Additionally, I was aware of the fact that I was a female author writing a sex scene. I’ve spoken about the gender bias in the writing industry before, but realised it was incredibly present when it came to interpreting fictional sex scenes. Often, these scenes when written by women are seen as confessions, autobiographical even, which made me feel particularly uncomfortable.

What helped me move past this discomfort was the fact that I was writing from a man’s perspective. This helped me feel like I was keeping a relatively safe distance from the risks above, at least during the writing and editing process (perhaps another post will be due by the time these scenes are finalised in print).

Essentially, what I’ve come to understand is like most things in writing, there’s no ‘right’ answer, a writer just has to be aware of their own intentions, as well as that of their characters, and should work closely with an editor to make sure these two visions match up as best they can.

Lastly, I thought I’d list a few quick tips I’ve learned during this process below. Fingers crossed someone out there finds them useful…

This article was originally published on HelenScheuerer.com