Fight scenes are common across a range of genres, from action, spy and thriller novels to fantasy and sci-fi. They’re often a physical manifestation of the conflict that’s driving your story – and they’re great for keeping things exciting for readers.

Whatever genre you write, knowing how to write an authentic, exciting fight scene is an invaluable skill to have. But why are action and fight scenes so difficult to craft authentically? 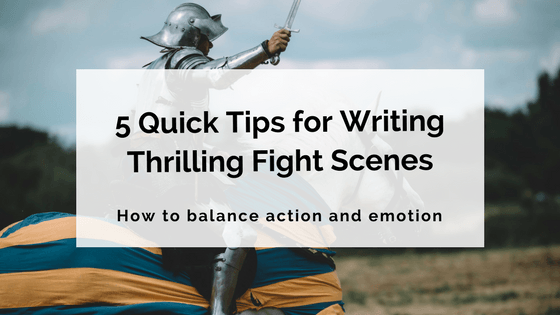 One of the primary reasons is that the average author doesn’t usually have a whole lot of experience with fighting in real life. And even if they do, it’s not an easy thing to translate to the page!

The scene has to strike the right balance between the actual action and the other important elements, like emotion and personal stakes.

With that said, let’s dive into some handy tips writers can use when crafting fight scenes in any genre.

While action helps to add interest and keep the pace moving, it should never be thrown in solely to ‘spice things up’. Physical conflict must always advance the plot and/or contribute to character development.

For every fight scene you plan on including, ask yourself: what purpose does this scene serve?

Plot-wise: Does the scene act as a crucial plot point, directly affecting later events in the story? Does it throw an extra roadblock in the way of your protagonist achieving their goal?

Character-wise: Does the scene reveal something about the character/s involved – their fears, their strengths, their weaknesses? Does the outcome of the fight have an effect on a character’s motivations, or on the way they change throughout the story?

Be honest with yourself whenever you want to include a fight scene.

If the answer to all of the above questions is ‘no’, you might really just be including the scene for the sake of bumping up the action. And if that’s the case, you’ll either need to rethink the dynamics of that particular fight scene – or ditch it entirely.

A common mistake many authors make when writing fight scenes is over-describing.

Firstly, always keep in mind that fight scenes should favour action over description. They aren’t the place to labour over detailed descriptions of setting or characters. Instead, your language should be action-based, focusing on verbs and keeping adjectives and adverbs to a minimum.

But we don’t just mean straight description when we talk about ‘over-describing’. We’re also talking about over-writing – giving too much detail about exactly what’s happening throughout the fight.

Many writers fall into the trap of writing out an exact choreography of their fight scene, providing the reader with a literal blow-by-blow and as much detail as possible. But this can actually end up being quite tiresome for the reader. Plus, it doesn’t leave much room for emotion (which we’ll talk more about below).

So instead of meticulously documenting every punch, duck and pivot, leave some things up to the reader’s imagination. Give them just enough detail so that they get the basic gist of the characters’ movements and can picture the scene in their own mind.

Then focus on doing the following…

Contrary to what you might assume, the most important aspect of a fight scene isn’t the action: it’s the emotion.

Most characters would not involve themselves in physical violence without strong motivation, which usually comes from strong emotion. Readers must also be emotionally invested in order for action scenes to have the most impact.

So how do you successfully infuse a fight scene with emotion?

As we discussed above, fight scenes are a place for action over description, and this includes the internal thoughts of your characters. To keep up the pace, we don’t want to know everything they’re thinking during every moment of the fight. Instead, we want to see everything they’re feeling.

Illustrate characters’ reactions and emotions with physical demonstrators: pounding hearts, blood rushing in ears, weak legs, hazy vision, and so on. Highlight their fury, their desperation, their feelings of triumph or defeat.

Balance out the physical blows with emotional ones to raise the stakes and make your fight scenes much more meaningful.

When you’re writing a fight scene, it can be tempting to make it as dramatic, exciting and cinematic as possible. This is all well and good – but you must still make sure you keep things realistic.

Here are a few unrealistic things you might see in a fight scene:

As with all fiction, you can afford to take some liberties when writing action scenes. A 100% true-to-life fight wouldn’t be the most entertaining thing to read, after all.

But be sure the liberties aren’t so unrealistic as to make your readers roll their eyes. Even if you write fantasy, things can’t be too over-the-top and unbelievable – you don’t want to fall prey to clichés!

5. Use writing style to enhance the fight

The style of writing in a fight scene is extremely important. Things like sentence length, paragraph breaks and punctuation can really affect the pacing and impact of a fight scene.

Fight scenes are generally fast-paced, so this should be reflected in your writing style. Use short, punchy sentences (pardon the pun). Take paragraph breaks for extra impact. Use punctuation effectively – for example, cutting off a sentence with a dash to illustrate a character being hit with a surprise blow.

In general, fight scenes should be kept to a relatively short length. After half a dozen pages of non-stop action, keeping up with the fight can become wearisome rather than exciting, so for maximum impact, try to keep each fight scene to a few pages, max.

Word choice can also help to make or break a fight scene. Try to use visceral words that bring the fight to life for the reader – for example: ‘With a sickening crunch, her fist connected with his jaw, knocking teeth loose and snapping his head back.’

For further inspiration, check out HuffPost’s roundup of the most memorable fight scenes in literature, and this SFFWorld thread on the best action and fight scenes in fantasy.

What are your favourite fight scenes in literature? Let us know what you think works (and what doesn’t) in the comments!)