If you’re writing a series rather than a standalone novel, you’re facing a whole range of additional challenges. The idea of writing one book can be intimidating enough, let alone several books that need to come together in a coherent whole! 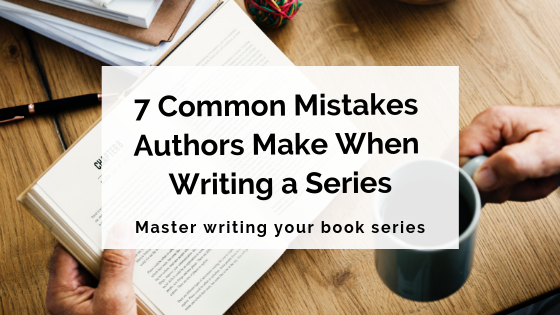 But don’t worry. To help you through the process, we’ve identified seven of the most common mistakes made by those writing a series, so you know exactly what not to do when telling a story over multiple books.

1. Not planning your series in advance

It’s completely fine to be a pantser instead of a plotter. We’re all about writers working in the way that suits them best. But when it comes to writing a series, taking only a pantser’s approach has the potential get you into some serious trouble!

Plot holes, dead ends, writing yourself into corners, not knowing how to end the story… These are all things you risk when you approach a series without doing at least some planning.

We don’t mean you have to plan down to every individual chapter and scene (unless you work best this way, in which case, knock yourself out!). But we do recommend that you have, at the very least, a rough outline of each book in the series, and an idea of where you want the story to end up.

Check out our guide to planning your novel to get you started. You can use many of the same tactics to plan your series as a whole.

When a reader commits to a series, it’s because they’ve found something they like – a story, a cast of characters, a style of writing (or all of the above) – and they want to stick with it.

If that series suddenly changes midway through, in terms of content, tone or premise, you risk losing the reader.

For example: if you begin writing a fantasy series, but suddenly switch genre to hard sci-fi midway through, you’re likely to lose those readers who were invested in the fantasy elements of your story.

Similarly, if your series begins as young adult fiction, but then transforms drastically into adult fiction and leaves all the characteristics of YA far behind, you might end up driving away a large portion of your target audience.

Readers have certain expectations when it comes to series. We’re not saying you have to stick rigidly to these expectations, or that you can’t experiment, cross genres or take unexpected twists and turns. But we are advising caution when it comes to making drastic left turns midway through a series.

For many readers, it’s all about consistency. Which brings us to our next point…

3. Being inconsistent with details

When working on a story sustained over multiple books, it’s inevitable that you’ll make a few mistakes. Some of the most common slip-ups are inconsistencies in the details of your story, your characters and your world.

But while many of these might seem minor, they can really add up across the course of a series, detracting from its authenticity and from readers’ enjoyment of the story.

Whether it’s plot holes, characterisation discrepancies or inconsistencies in world-building, every error that sneaks through has the potential to harm your series.

Try to keep track of as many details as possible so that they can be checked and kept consistent across all your series’ volumes. If this means you need to break out the old spreadsheet method, do it!

A great editor and/or sharp-eyed beta readers can come in handy here too. Often, you’re so close to your own story that you aren’t able to identify inconsistencies even if you try.

It’s always wise to have a second (or third, or fourth) set of eyes looking out for things that don’t quite add up.

4. Having instalments that don’t stand alone

Let’s clarify straight-up: we don’t mean that every series has to contain standalone stories that can be read independent of the series itself.

When we say ‘instalments that don’t stand alone’, we mean volumes of a series that don’t have compelling, contained story arcs of their own. Weak volumes that are purely ‘filler’ content to take you from one book to the next in a series.

Each book in a series must have its own plot, its own story and character arcs, as well as tying in to the overall arcs of the series as a whole. Each instalment must be cohesive on its own – enjoyable as a single volume, as well as part of a wider story.

There are a couple of caveats when it comes to the overall series arc, though.

An overarching plot is vitally important in certain genres – fantasy, sci-fi, dystopian fiction, etc. However, it isn’t necessarily as important in other genres like crime, mystery, action and thriller, where each book is often a single contained story or case, which doesn’t necessarily form part of a wider series plot or arc.

5. Leaving too many unanswered questions

There’s nothing readers hate more than too many loose ends and unanswered questions – especially in a series.

Most, if not all plot threads should be tied up by the time your series comes to an end. This doesn’t necessarily mean they have to be tied up too neatly or happily – simply that they can’t be forgotten or abandoned entirely.

If your series does leave certain things open to interpretation, this has to be done deliberately and for a reason, not just because you forgot about that particular plot thread or couldn’t work out a way to resolve it.

Keeping track of all your plot threads throughout the course of the series can help you ensure there are no unintentionally forgotten elements or loose ends. (Again, this is where a trusty spreadsheet can come in particularly handy!)

Remember that your readers will want at least some sense of closure once the series comes to an end. Cliffhangers and mysteries are all well and good throughout the body of the series, but in that final book, there must be the true sense of an ending.

Just as a series must have a plot that grows and develops through all its instalments, it must also show significant development in its characters.

Your characters, especially your protagonist/s, must grow, change and develop throughout each book and over the series as a whole.

Characters who remain static and don’t show any development over the course of a series – who are basically the same person in the last book as they were in the first – aren’t believable or compelling. And they won’t do your series, or your story, any favours.

No matter what type of character arc you’re planning for your protagonist/s, antagonist/s and supporting characters, it must stretch across the entire series.

The ultimate goal is to take your reader on a personal journey with the characters as they are shaped by the events of the story – to have readers feeling, by the end, as if they have grown and changed alongside the characters themselves.

There are plenty of benefits to writing a series, but it’s vitally important that you don’t write one simply for the sake of doing so.

When starting the process of turning an idea into a story, you need to take time to consider whether that story needs to be a series, or whether it’s better told in a single book.

You’ll end up doing yourself a disservice if you try to stretch an idea or concept too thin across multiple books when it would have been better explored in just one.

So be honest with yourself when answering the question: do I need to write a series to tell this story?

This will help you avoid things like the dreaded second book syndrome, and all the other downfalls of a series that really should have been just one book.

Ready to take on a series of your own? If you haven’t already, check out our ultimate guide to writing a series and get stuck in.