Let’s admit it, readers: we all love a good death scene.

Whether we’re ugly-crying because we loved the character so much and OH, THE INJUSTICE, or punching the air and cheering because that villain got what they deserved… There’s nothing like a well-crafted death scene to elicit a strong reaction in a reader. 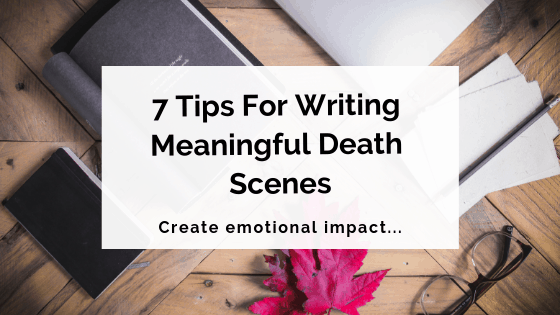 But how should we approach death scenes from the other side – as writers?

Dealing with character deaths is a difficult part of fiction writing. A lot of thought, effort and even pain goes into crafting those death scenes readers respond to so strongly. It’s an intimidating task, to say the least.

Luckily, we’ve got you covered with a handful of useful tips for writing meaningful death scenes. Read on and you’ll be making those readers weep/cheer/gasp in no time!

1. Make the reader care about the character

Without a doubt, the most important part of writing a meaningful death scene is making sure the reader actually cares about the character who’s dying.

If you haven’t created compelling characters whose fates your readers are emotionally invested in, you’re going to have a hard time writing a death scene that packs a punch.

Crafting properly developed characters, who readers can root for, relate to or just simply like, is a sound strategy in any fiction writing. And when it comes to fictional killings, these characters are the ones whose deaths will be the most meaningful and affecting for readers.

Spending plenty of time developing a character’s personality, backstory and motivations is the best way to build up to a death scene that’s really going to mean something. The scene itself will be served well by all the character development that has led to it.

However, you never want to use these kinds of characters as cannon fodder to force an emotional reaction just for the sake of it. More on that further below.

2. Make the reader despise the character

On the flip side, creating an authentic villain who inspires readers’ ire is a surefire way to get them cheering when you kill that character off.

As we touched on above, your reader doesn’t always have to be saddened by a character death! It’s simply a good, strong reaction you’re looking for – whether that be sorrow when a ‘good’ character is lost, or triumph when a character who’s caused pain or destruction has it turned some way back on themselves.

Let’s use everyone’s favourite death-heavy show as an example: Game of Thrones. Think about the time [redacted] was viciously poisoned, [redacted] was eaten alive by dogs, or [redacted]’s throat was cut by [redacted].

These hateful characters had been built up to the highest point of villainy in viewers’ minds, and when their deaths were finally brought about by characters we were rooting for, it made for very satisfying viewing. If you can achieve the same effect in your novel, you’re on the right track.

(Here’s an extra challenge for you: See if you can make readers hate a character… And then actually feel sad, rather than satisfied, when they die. Case in point: Severus Snape, who turned out to be more of an anti-hero than a straight-up villain, and whose death scene was rather more tragic than triumphant.)

3. Show the death’s effect on other characters

A death scene becomes meaningful not only when the reader is invested in the outcome, but when other characters are invested as well.

It’s important to show the way death affects your characters, especially your protagonist. As well as exploring the plot-related repercussions of a death, the emotional impact on the characters should be examined, too.

The way a character reacts to someone dying can tell readers a lot – not only about the character themselves, but also about their relationship with the departed character. Try to weave these kinds of insights into your death scenes to add an extra layer of depth.

There should be personal and practical costs and consequences to every character death. Drawing these out and exploring them is a great way to deepen the story, develop your characters and ultimately add meaning to every death scene.

(To flip this concept on its head: if you’re writing a scene that focuses on someone who’s killing someone else, rather than the person dying, showing the effect on the killer can give insight into that character. Are they haunted by what they’ve done? Or emotionally distant? Is it a cathartic moment, or a traumatic one, or a combination of both?)

When trying to craft the perfect death scene, it’s easy to assume that you need to go all out. It can be tempting to ramp up the emotion and drama, draw out the moment and essentially milk it for all it’s worth.

However, when this is overdone, it doesn’t tend to go down too well with readers. It’s essentially telling them how they should feel about the death, rather than allowing them to feel it themselves. Readers don’t like being spoon-fed like this.

For this reason, it’s important not to over-dramatise a death scene or pack it full of clichés.

An example of an overused and often over-dramatised death scene cliché is the long, drawn-out deathbed speech. You know the one – where a character is supposed to be dying, but just keeps talking instead, more often than not choosing that moment to reveal some huge piece of information vital to the plot.

Using a death scene in this manner can make it feel somewhat disingenuous and hollow. Yes, death scenes can (and often will) be dramatic and plot-changing, but this effect should come naturally. Readers won’t respond well if it’s forced.

One of the most important qualities of any death scene is that it must be necessary for the story. Killing characters simply for shock value isn’t the right way to craft a meaningful death scene, or a meaningful story overall.

Yes, it can be great to surprise readers with a huge plot twist in the form of an unexpected character death. But when this is done purely for the sake of shock, and doesn’t actually contribute realistically or meaningfully to the story, it can come across as cheap or contrived.

Also keep the shock value element in mind during the actual writing of a death scene.

There’s nothing wrong with violence, blood and gore if they have a place in that particular story, for a particular purpose. Perhaps you need to get across the brutality of a villain, or the way suffering affects a character and those around them.

However, when you use these elements purely for the purpose of shocking, your death scene risks becoming gratuitous and over-the-top. Ask yourself: how much detail do readers really need to see here?

Consider whether the more shocking aspects of the scene contribute to the story or the development of a character, or – and be honest with yourself here – whether you’ve included them for shock value alone.

6. Try not to make a death predictable

When you’re writing your way towards a death scene, it’s important to strike a balance between foreshadowing/building up to the moment, and not giving too much away.

Let’s say you’re planning to kill off one of the ‘good guys’ – a beloved character whose death will sadden other characters and, you hope, your readers.

While you want to make this character endearing to readers and hence heighten the tragedy of their eventual death scene, it is possible to overdo it, inadvertently tipping readers off that the character is fated to die.

For example, if you start over-emphasising moments where that character talks about the future and how great their long, long life is going to be, you might be dropping too strong a hint that they’re not going to make it.

When carried out so subtly as to escape readers’ conscious notice, these elements of build-up can have great payoff when it comes to the actual death scene. But be sure ‘subtle’ is the key word here, otherwise you risk the scene falling short of the surprise and emotional impact you intended.

7. Get into the right mindset (but have a plan to get yourself out)

We’ve all heard that old Robert Frost saying: ‘No tears in the writer, no tears in the reader’. It’s a particularly relevant sentiment for the practice of writing death scenes.

You don’t have to take it 100% literally, but just be aware that if you feel nothing when writing a death scene, chances are your readers will feel nothing, too. And indifference is the last result you want when crafting a character death!

To ensure your readers (and you!) feel the gut-punch blow of a tragic character death, you’re going to need to put yourself in the ‘right’ mindset. But be aware: this isn’t necessarily a pleasant thing to do.

You might have to draw deep from your own emotional well, harking back to your own experiences of loss, grief or trauma. And while this can make for some raw, moving and effective writing, it can also be emotionally taxing.

So if you’re willing to, quite literally, ‘suffer for your art’, don’t forget to take care of your mental health. Be sure you have a way to get yourself out of this dark mindset when you’re finished writing.

So there you have it, writers!

Whether you’re writing a thrilling fight scene that culminates in a character death, or focusing on the emotional impact of the moment, these tips should help you craft a death scene that’s effective and meaningful.